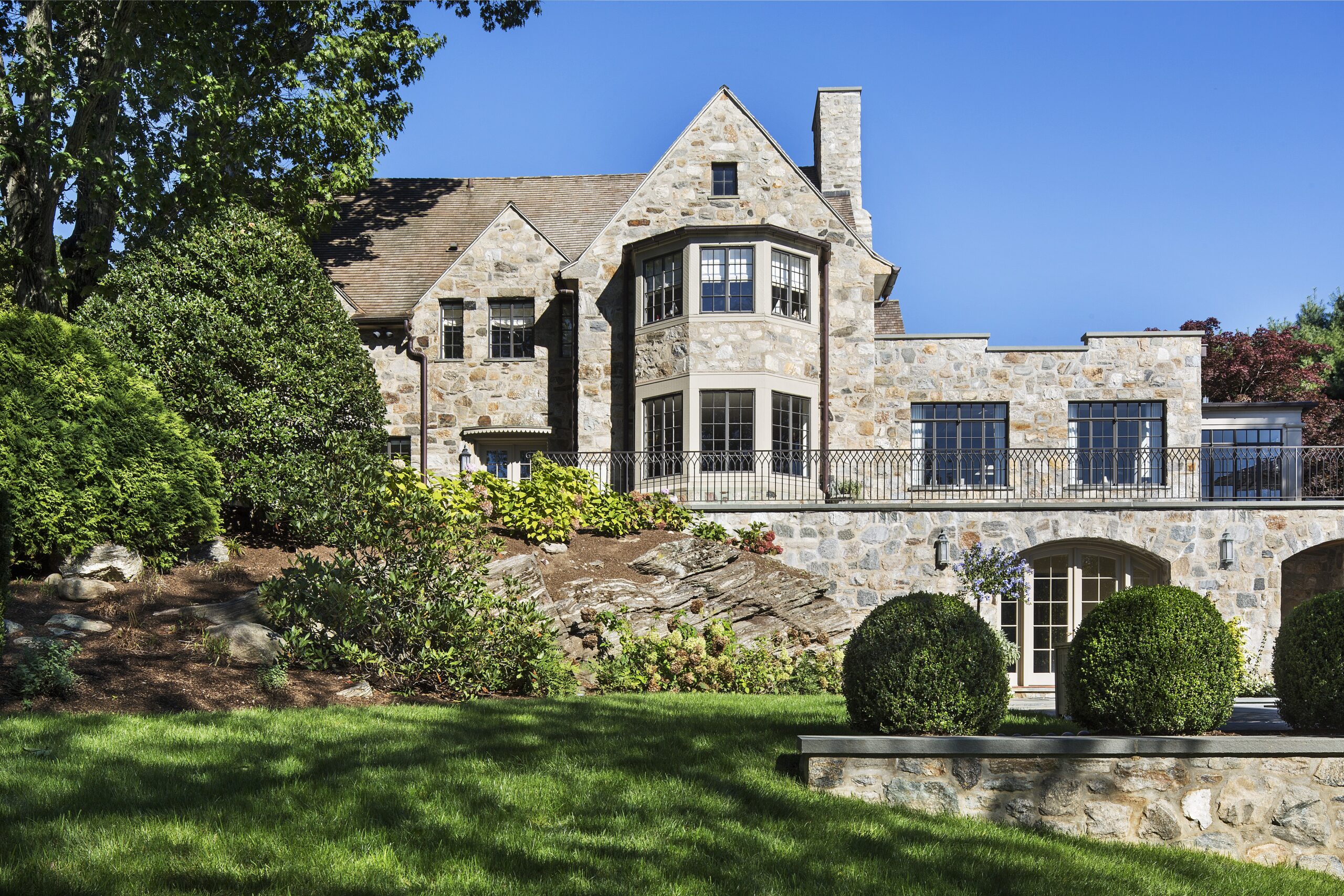 Seamlessly Blending the Old and the New

Sometimes an addition requires a bold stroke to announce that it is entirely different from the original fabric of the house. However, in the case of this quiet stone house in Fairfield County, the new portion barely announces its presence, fusing effortlessly with the pre-existing architecture. Here, Wadia Associates designed an addition that echoes the strong massing of the original 1929 house without overpowering its robust gables, Edwardian-inspired tower, and simple exterior details.

For this project, the owners requested an updated floor plan with an open core living space easily accessible to the outdoors. Because the house is surrounded by mature trees and landscaping, the question of how to increase the square footage of the footprint was difficult. By removing an existing covered veranda and a mature oak tree—a significant stumbling block since it was located right in the center of the proposed addition—Wadia was able to expand out from the east side of the house. The bulk of the addition was confined to the basement and first floor, keeping the height of the exterior walls in check so they did not compete with the existing massing of the gabled walls and chimneys. A new terrace became a logical extension of the interior living space and the expanded kitchen and breakfast room happily capture the early morning light created by the eastern exposure. 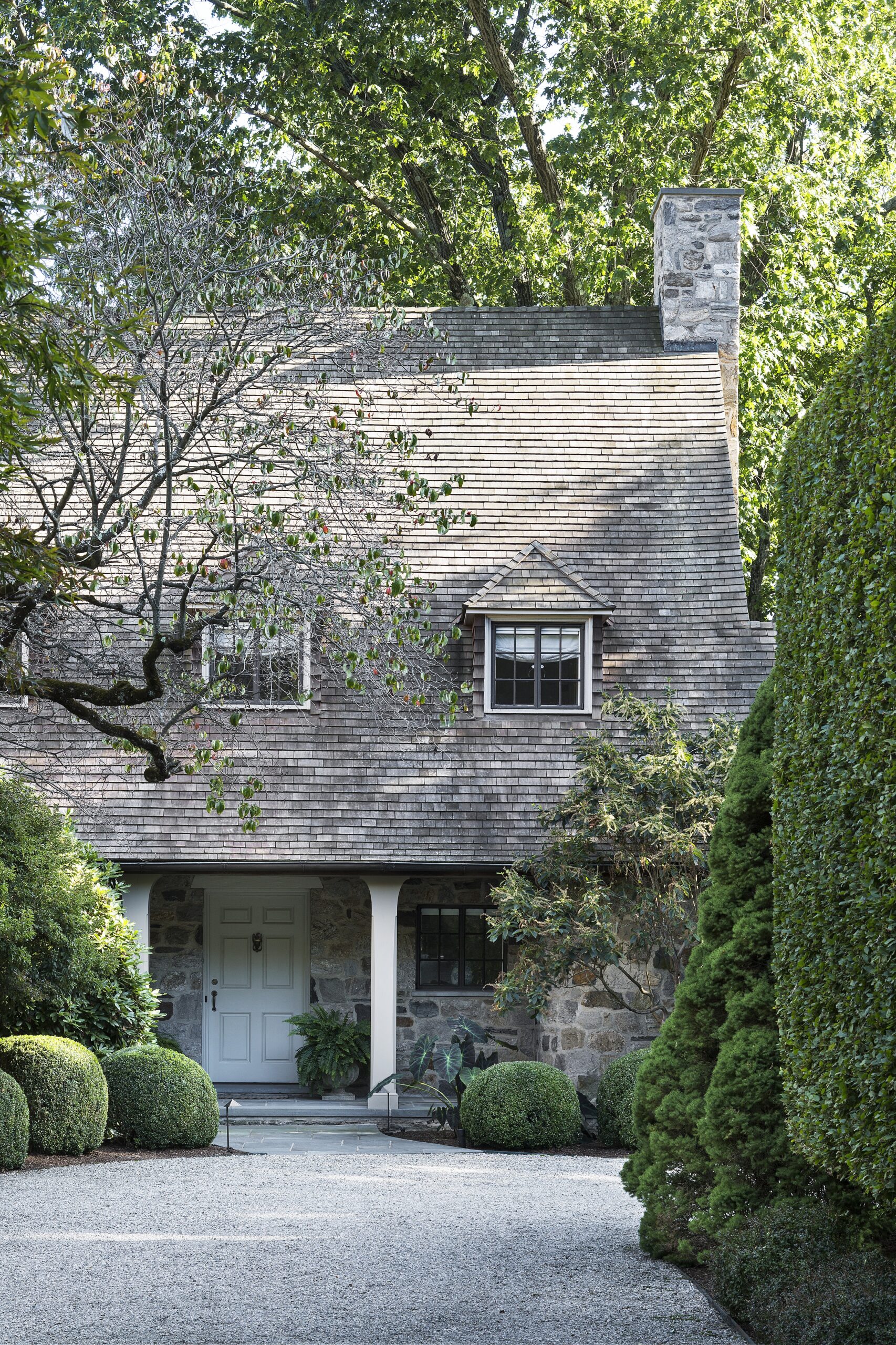 The entrance to the house, shaded by the generous front porch, is framed by lush landscaping. 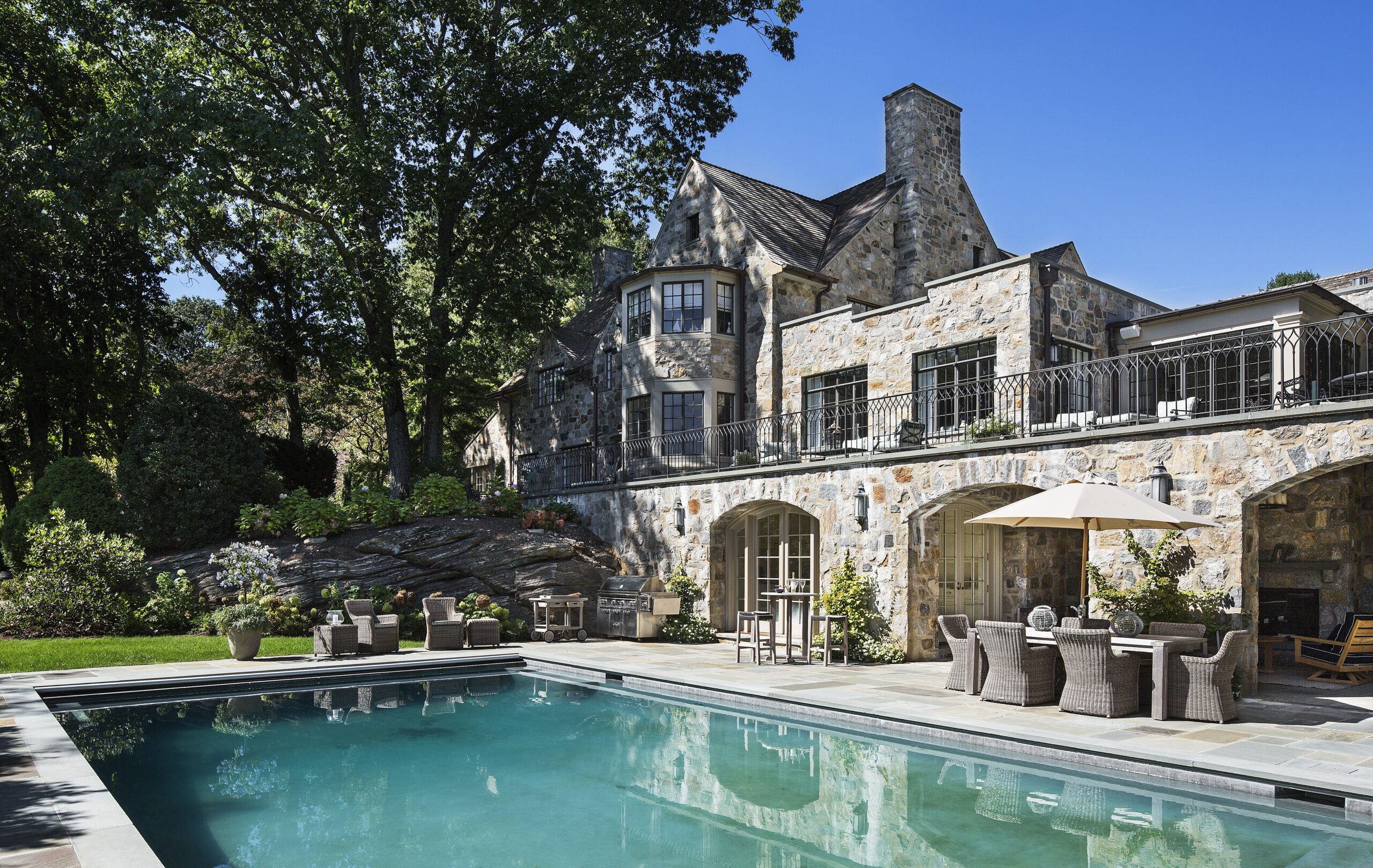 In the rear, the lower grotto area off of the pool is set neatly underneath the new upper terrace. The stone wall blends seamlessly with the rock outcroppings in the backyard.

It was crucial that the new masonry of the addition mesh with the existing stone façades. Stone houses of this quality are rare and the exterior, with its multi-variegated stone colors, gives the walls a warm golden tone and a rustic yet refined texture. Wadia worked closely with the mason to find just the right color and cut for the stone veneer and to devise the perfect grout formula. After going over endless panels of stone and grout samples, Wadia arrived at just the right combination: a grout recipe with specific types of sand and grit that would weather over time to the perfect color and texture. This level of detail enabled the addition to blend seamlessly with the existing fabric—so much so that it is impossible to differentiate between the old and the new.

Despite the fact that just under one thousand square feet was added, the living space was completely transformed. Upstairs, Wadia’s improvements were confined within the existing footprint: the bedrooms were stripped and updated and a reconfigured master bedroom received a larger bath and closet.

Downstairs, however, the eastern side of the house was opened up to create a new interconnected kitchen, breakfast room, and family room—the most heavily traveled interior spaces. New metal windows match the existing windows in color and style but the larger expanses of glass allow for more light, creating airy and bright living quarters. This is particularly true for the breakfast room which has two exposures and a door out to the terrace. The kitchen opens onto both the breakfast and family rooms and has a large boxed-out east-facing window and a pyramidal skylight above the island to draw more sun. In contrast, the family room has a masonry corner fireplace and built-in millwork that gives the space a cozy and more intimate quality. 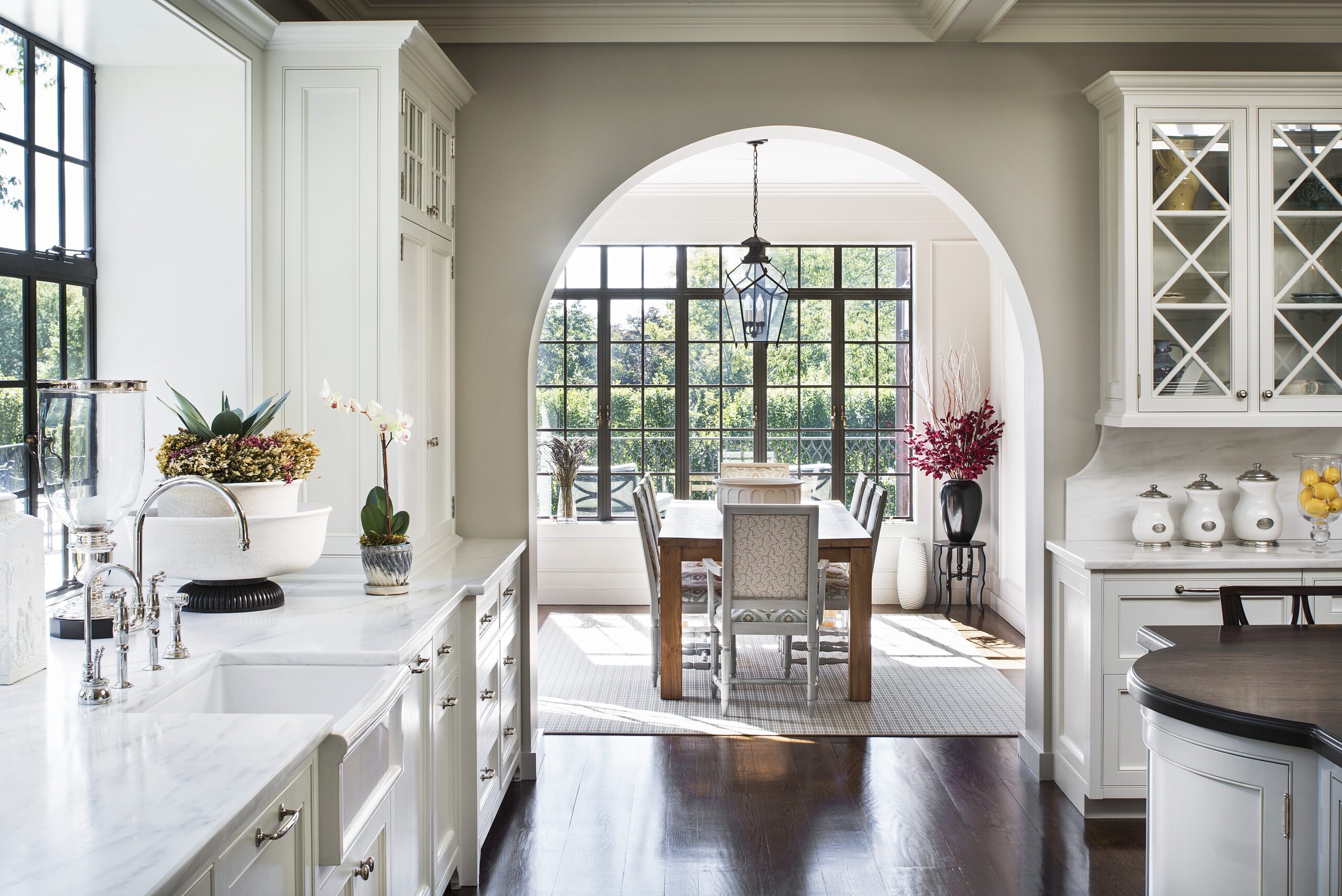 A large arch in the kitchen opens into the breakfast room and frames views of the stone terrace and greenery. 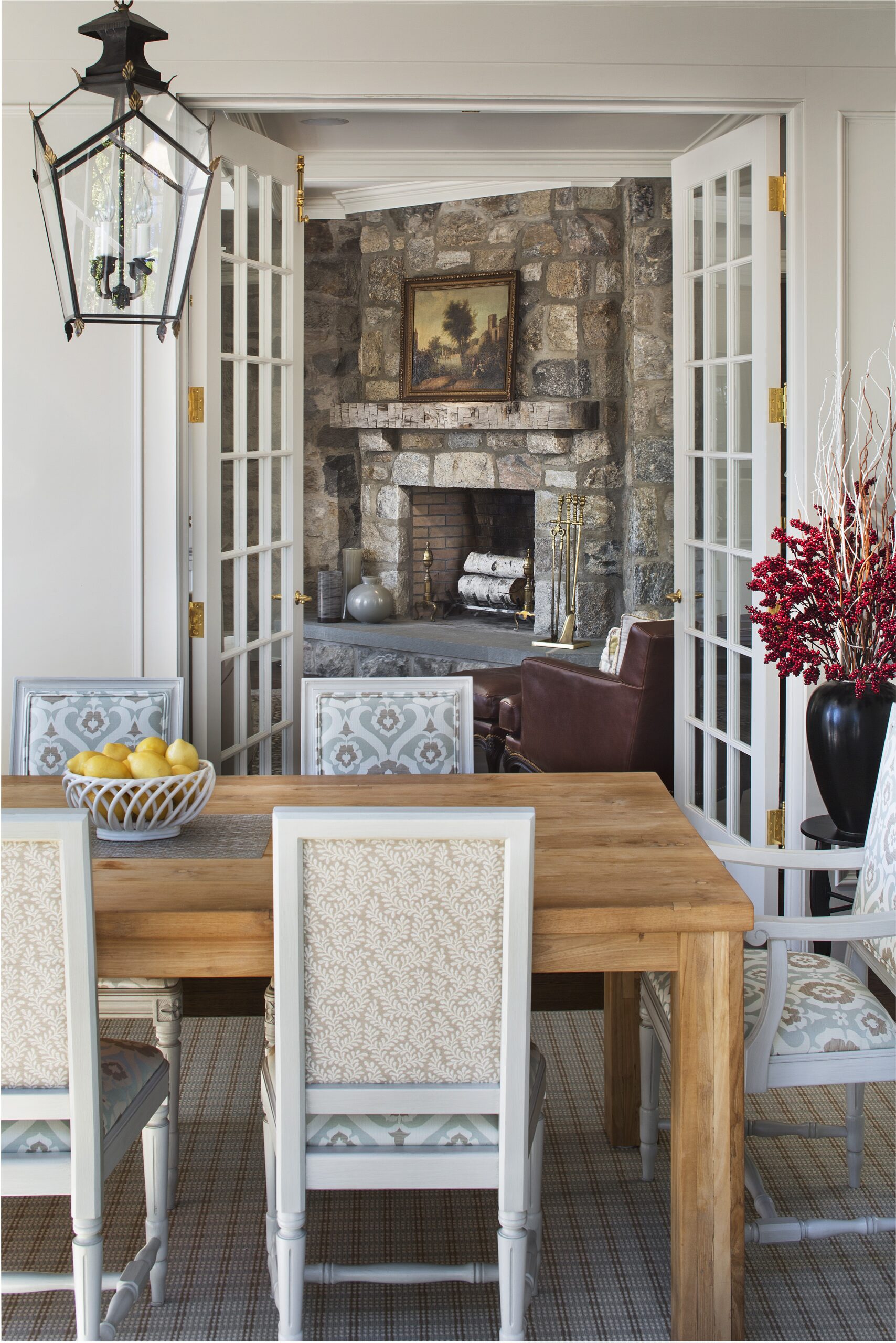 The breakfast room is connected to the family room and kitchen to allow for easy circulation between the well-used spaces.

Fortuitously, the new terrace created an unforeseen opportunity discovered during the design phase of the project. Wadia captured the space underneath to create a shaded grotto adjoining the pool below. With a direct connection to the lower butler’s pantry and changing room, it has all of the functionality of a separate pool house but is tucked inconspicuously under the upper terrace.

The walls, carried out in the same stone as the addition, blend with the coloring of the rock outcroppings in the backyard—a measure that integrates the house with its site and gives the impression that it is a natural extension of the landscape.

A box window over the sink and a skylight directly over the island flood the kitchen with light. The rough stone of the fireplace and hewn timber mantel in the family room contrast with the more polished beams and millwork in the kitchen.

While metal door and windows in the family room draw in natural light, the luxurious window treatments allow for a more intimate setting.
View Portfolio