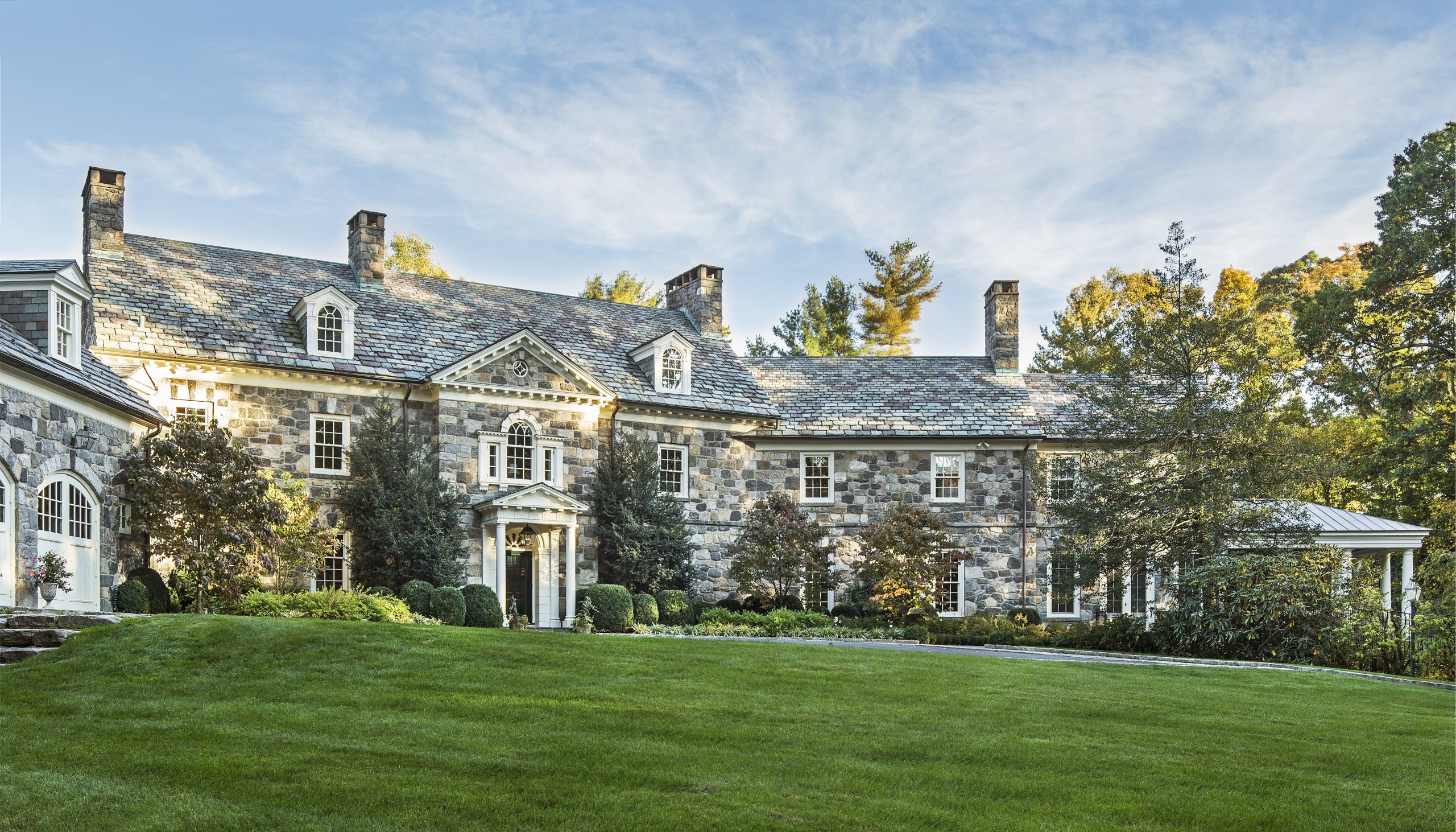 A Modern Interpretation of the Georgian Style

As one of the oldest building materials, stone is incredibly versatile. Its range of shape, texture, color, and character gives it a unique quality and palette with which no other material can compare. The walls of this substantial Pennsylvania Dutch Colonial house, built in 1924 inGreenwich, Connecticut, are composed entirely of thick multi-variated stone, unlike contemporary houses that use a thin stone veneer attached to a wood stud wall. The owners requested three major modifications to their historic house originally known as Wishing Woods: to update the kitchen, breakfast, and family room configuration; to revamp and refresh the interiors, including the trim and moldings; and, most significantly, to renovate the sunroom and garage wing of the home extending at an angle to the southwest. This portion of the project proved to be the most complex since the program required adding abasement and sub-basement underneath the terrace stretching above the garage off the sunroom. During construction, Wadia discovered that the south westerly side of the house was sitting on a solid rock ledge. So as not to disturb the existing house, it was necessary to carefully split and remove rock through various methods while reinforcing the structure to prevent the stone foundation walls from moving.

The terraces on the back side provide a graceful transition from the house to the lawn. The hues of the thick stone of the facades have a lovely decorative quality.

The new curved end wall of the living room features framed and paneled openings that lead to the entry hall and wet bar. The painted dentil molding under the crown nods to Georgian and Colonial design.

The stone detailing of the new sunroom blends seamlessly with that of the older section.

The new pool house , proportioned and detailed to look as though it has always been part of the property, contains an open dining area and barbecue as well as a wet bar and powder room.

Designed for entertaining, the seating area in the pool house has a fireplace and a ceiling-mounted heater to make it comfortable on chilly evenings. Both the dining and seating sections have unobstructed views of the pool and landscaped rear yard.

The aesthetics of the project were equally challenging because the new slate roof and stone veneer of the sunroom addition had to perfectly match that of the existing house. Ensuring that the colors and textures matched was a difficult task on top of overseeing how the stone was laid so the grout pattern and color blended seamlessly with the existing stonework. The exterior trim details lean heavily toward the Georgian: the ornate cornice supported by modillion blocks; a central west-facing Palladian window; the entrance portico with an architrave and fluted triglyphs; and the front door framed by subtle wood quoins. At the same time, subtle details such as the protruding stone band course—a rustic element that delineates the first and second floors—and the rubble lintels above the windows and the circular surround on the round window above the front entry are carried through to the new exterior terraces and pool house in the rear yard.

Inside, Wadia carried the ornate detailing of the existing rooms into the renovated areas of the reconfigured floor plan. As the first room encountered upon entry, the foyer is richly paneled and features a lovely crown-and-base configuration. For all of the openings off the foyer, Wadia integrated semi-circular or elliptical arches into the wall paneling and pilasters, capped by carved and fluted wood keystones. In the renovated dining and living rooms, new paneled jambs, denticulated moldings, and geometric ceiling trim accentuate the space. 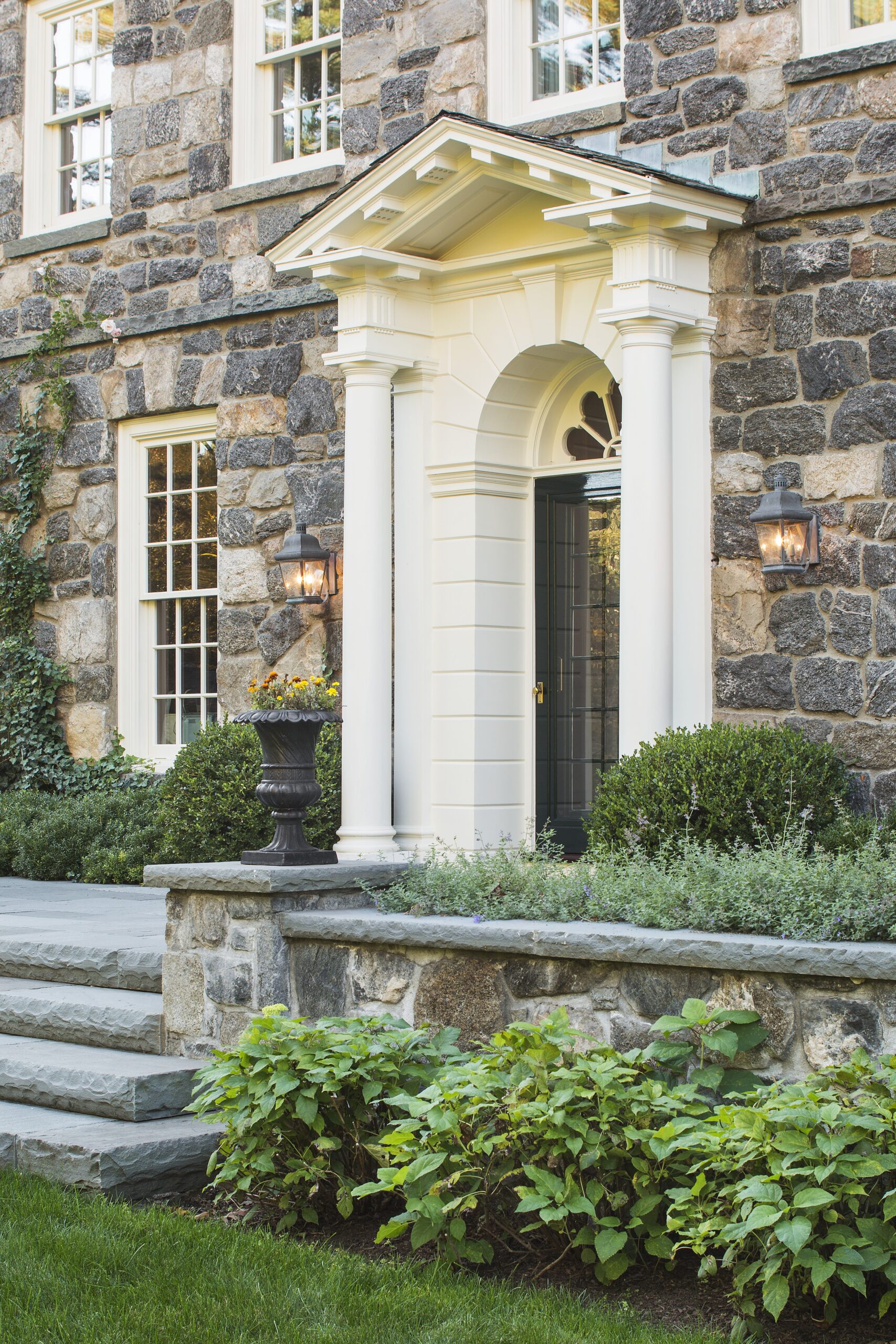 The rear portico mixes design elements from the front entry with playful details such as the heavily delineated lines of the rustication. Thick solid bluestone steps lead from the terrace to the back lawn and planting beds next to the house soften the look of the stone. 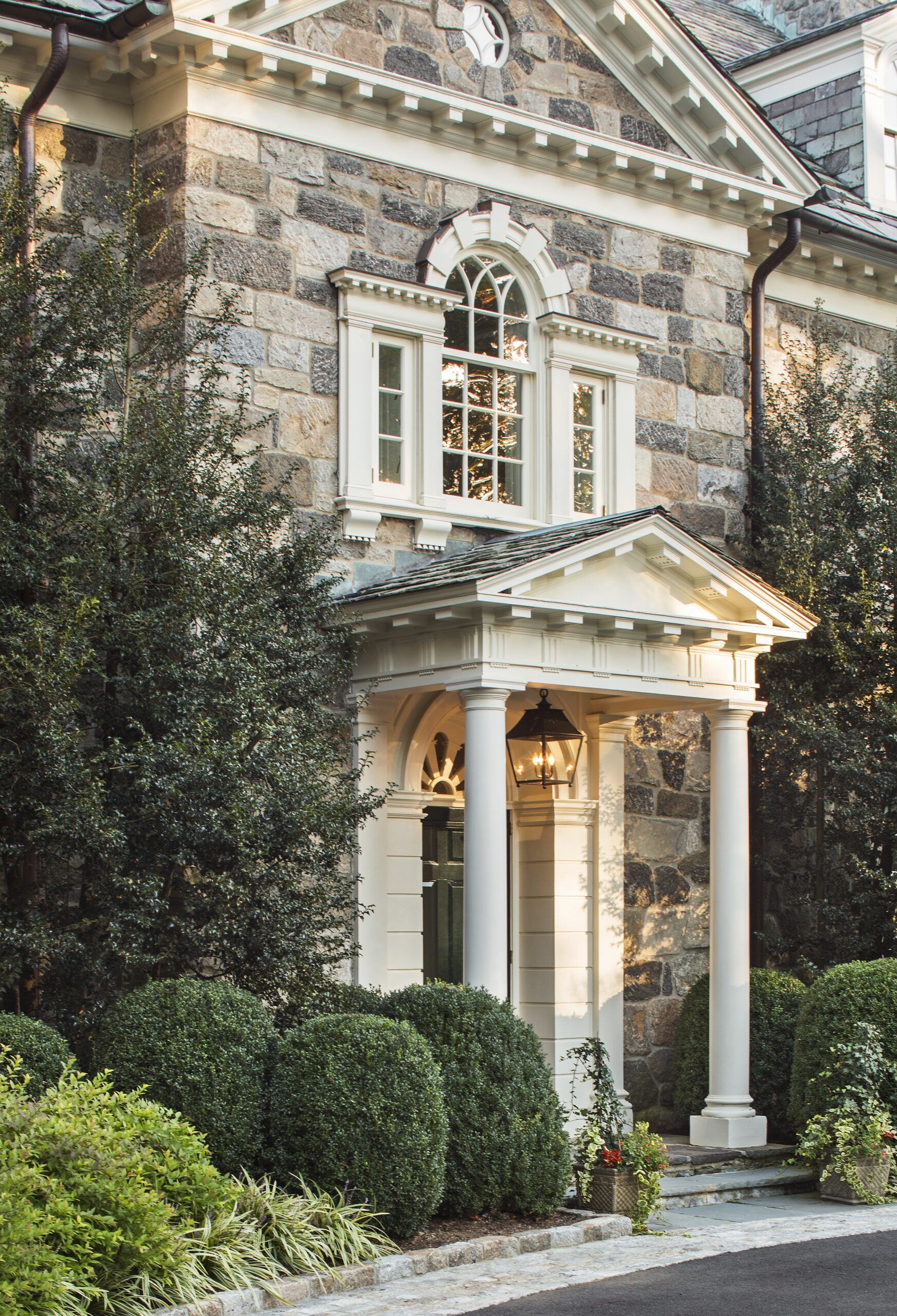 The intricate wood detailing of the front portico and Palladian window is echoed in the roof facia and carved modillion blocks. 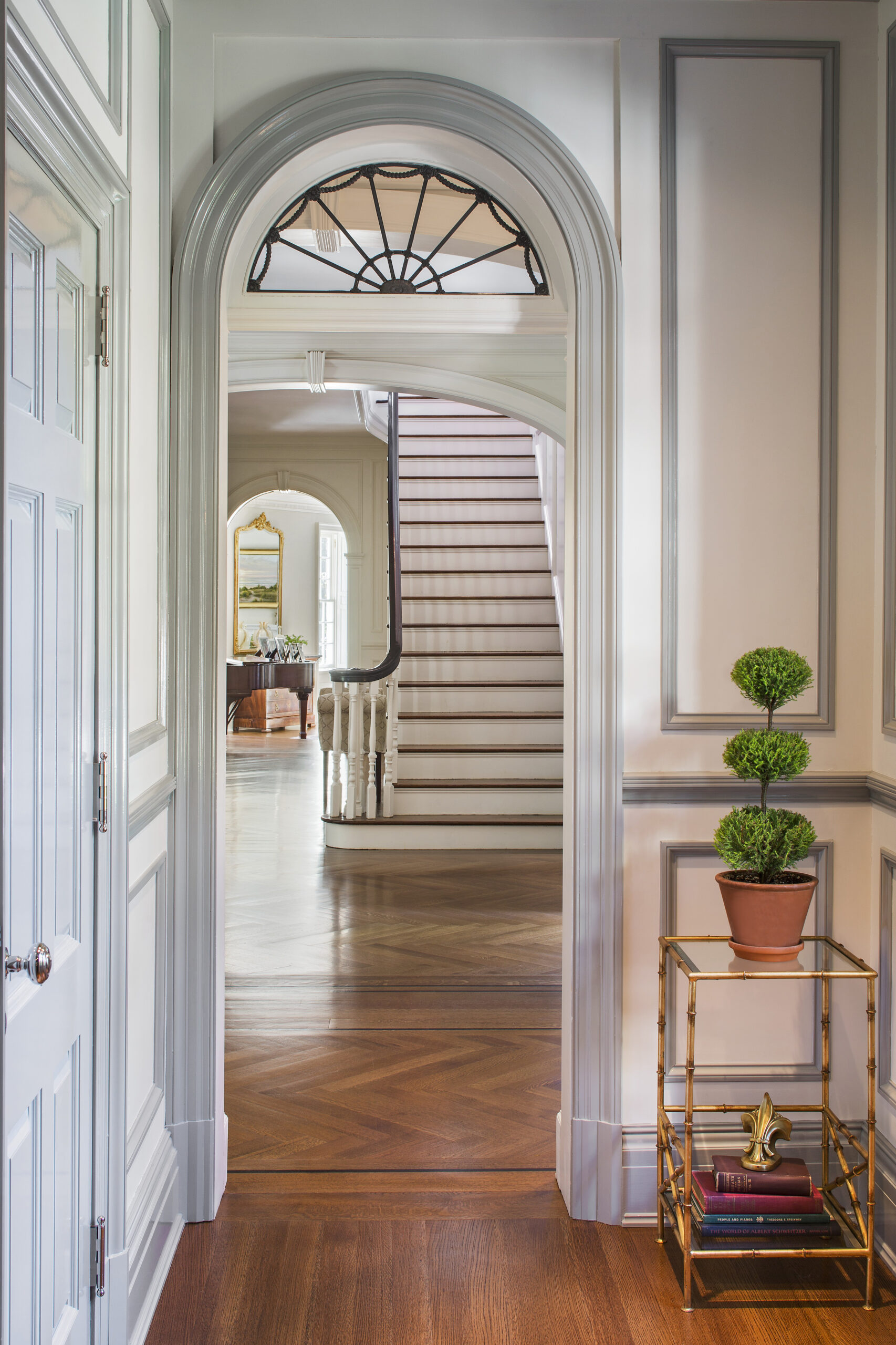 The casings are painted a contrasting gray to accentuate the profiles of the cased opening and wall panels.

Since Wadia also carried out the décor, the architecture, the furniture, and the crystal chandeliers work seamlessly together. The updated kitchen wing in the northern portion of the house received a simpler and cleaner overhaul while the less formal connecting breakfast and family rooms were designed to capitalize upon the available sunlight. Off the kitchen, the existing terraces were expanded across the rear east facing façade to the new sunroom where they neatly tie into the new pool area. Plantings soften the impact of the stone of the house and retaining walls that delineate the elevation changes between the terraces and rear lawn. The new pool house, proportioned and detailed to look as though it has always been part of the property, contains a wet bar and powder room and creates another dining and lounging option to the terraces immediately surrounding the house. In the planting beds, climbing plants and splashes of seasonal color stand in contrast to the open rear yard reserved for the simple beauty of its large, gently rolling, uncluttered lawn.

The elliptical opening of the stair hall is defined by pilasters and a carved wood keystone that blends with the casings and trim of the entrance hall. 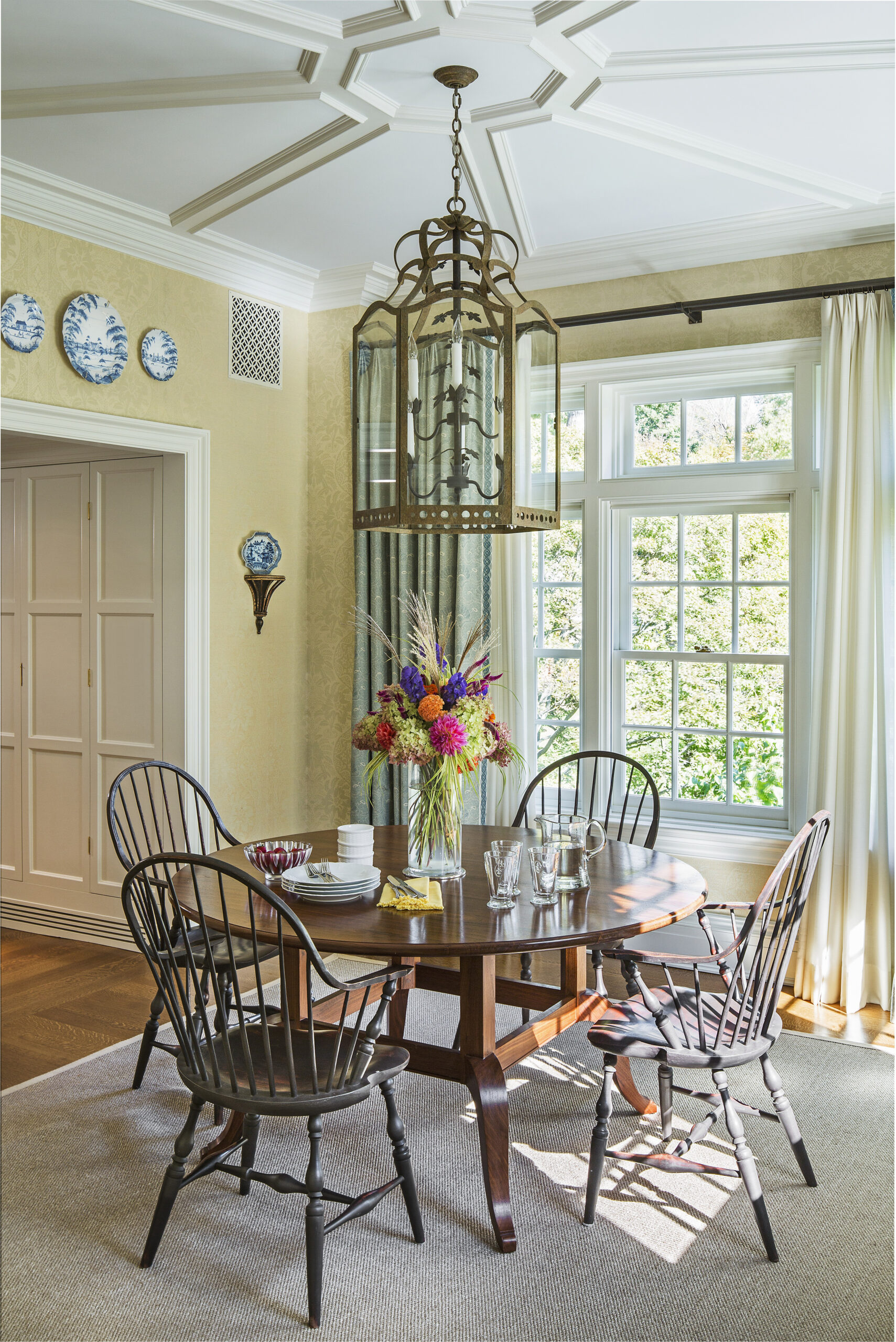 The octagonal ceiling in the breakfast room highlights the hanging lantern-style light fixture. 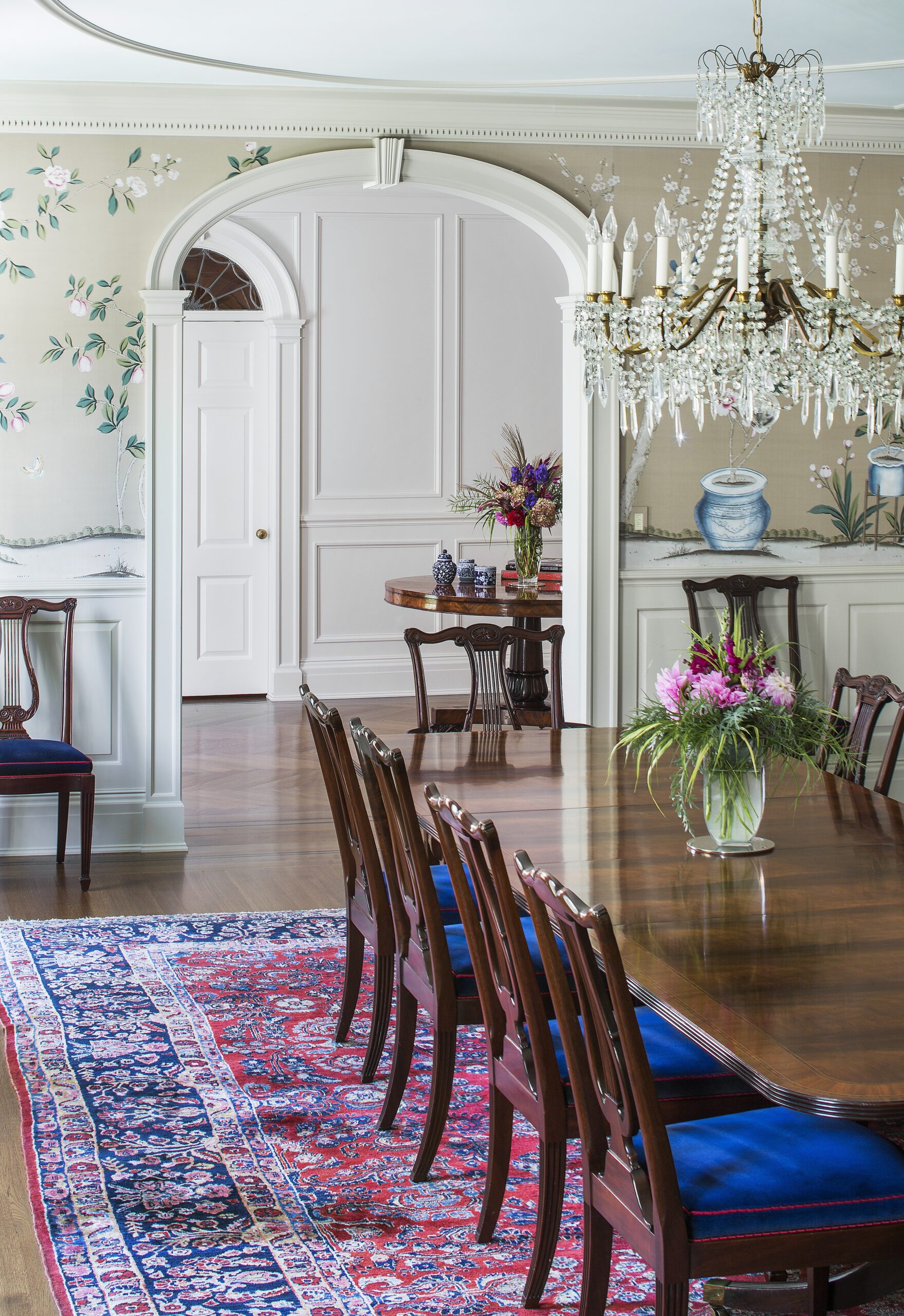 The dining room has a rounded plaster ceiling and a wainscot that follows, without duplicating, the entry hall panels.