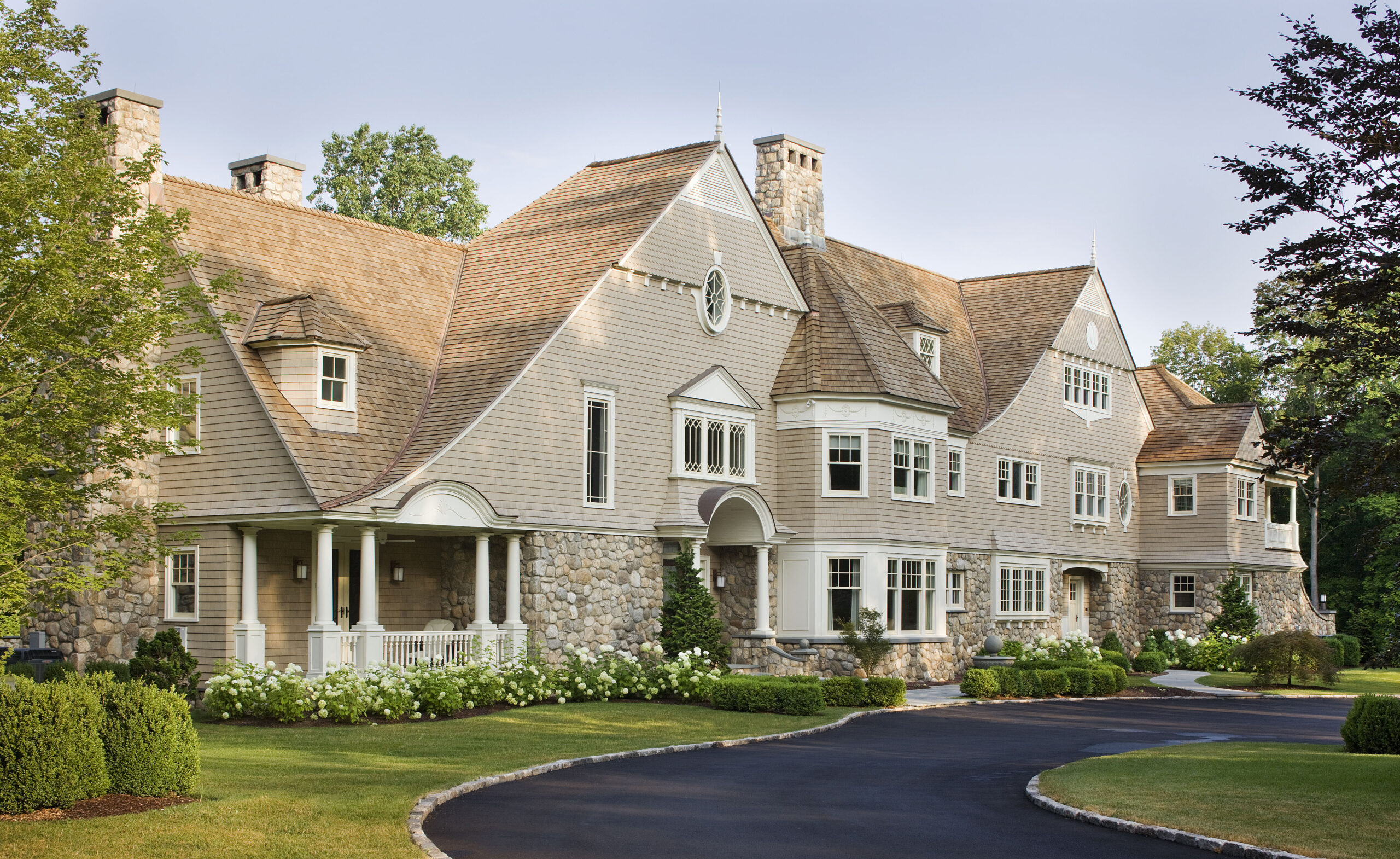 A Confluence of Inspirations

Initially the Shingle Style was most prevalent in summer resorts along the Eastern Seaboard in the 1880s as a rustic yet refined architectural style that blended Victorian taste and Colonial Revival influences. As the masters of this style, McKim, Mead & White were supreme at blending the indigenous and the exotic to create an entirely new American architectural approach that was inspired not only by this country’s colonial past but also by the architecture of Japan, the Middle East, Normandy, and England. Their great Isaac Bell house (1883) in Newport, Rhode Island, absorbed and transformed a host of influences into something beautiful, textured, and uniquely American. Today, this style continues to be relevant and reinterpreted to suit modern-day needs. 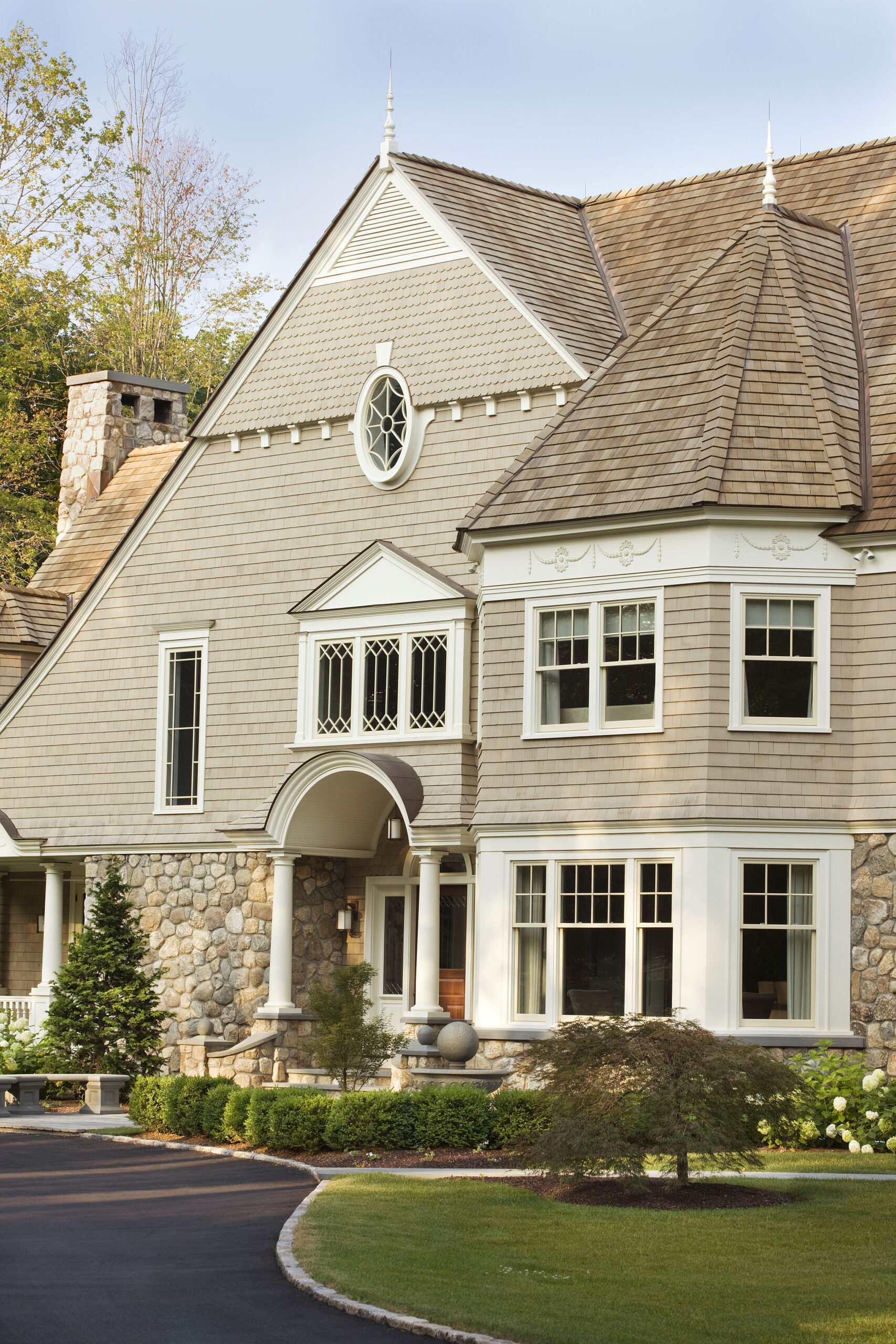 On the entrance front, the variety of shingle textures and stone add depth to the facade. An arched porch with diamond paned windows above announces the location of the front door while another small porch extends off the library. 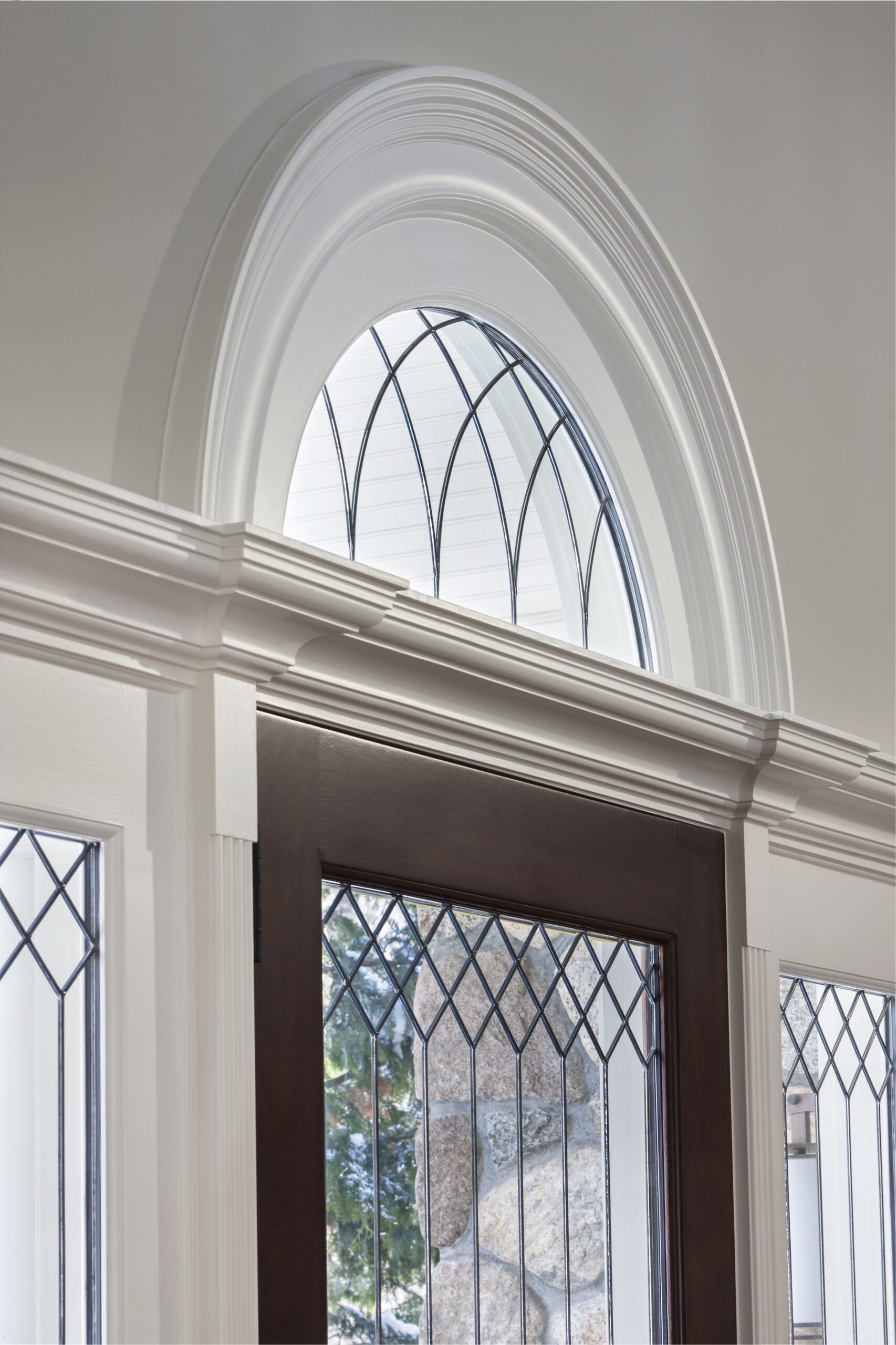 The arched transom above the front door 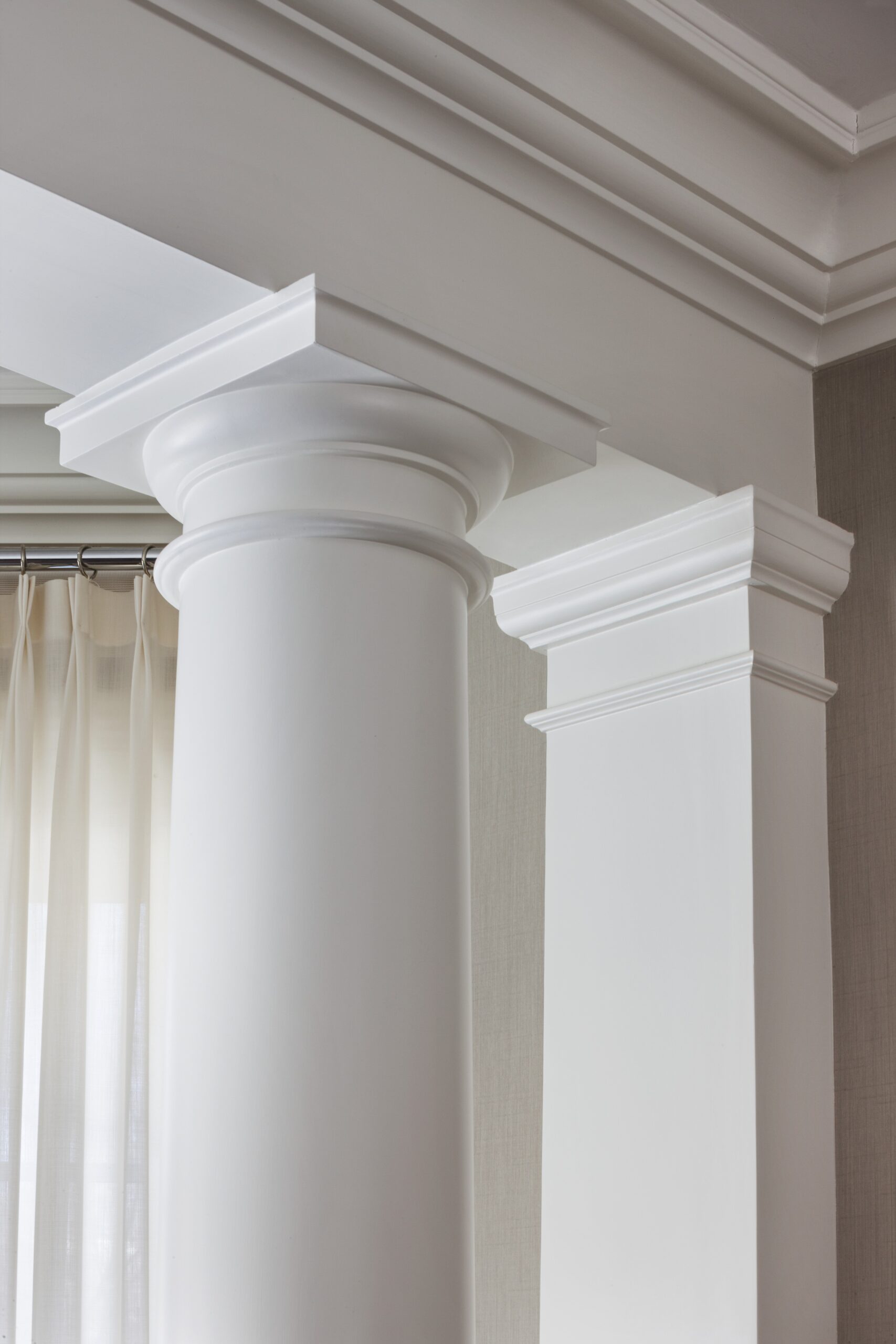 Columns flanking the entrance to the dining room. 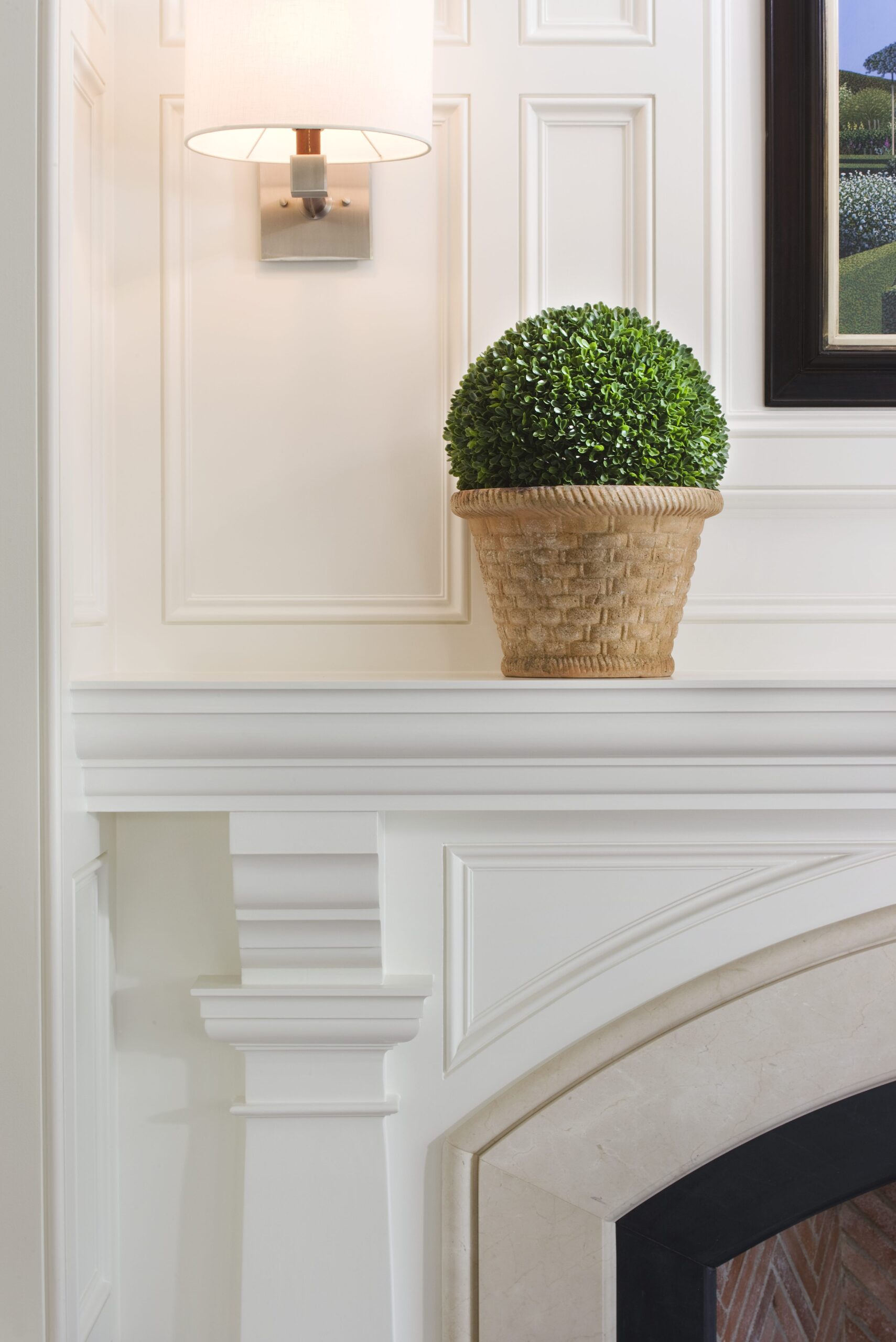 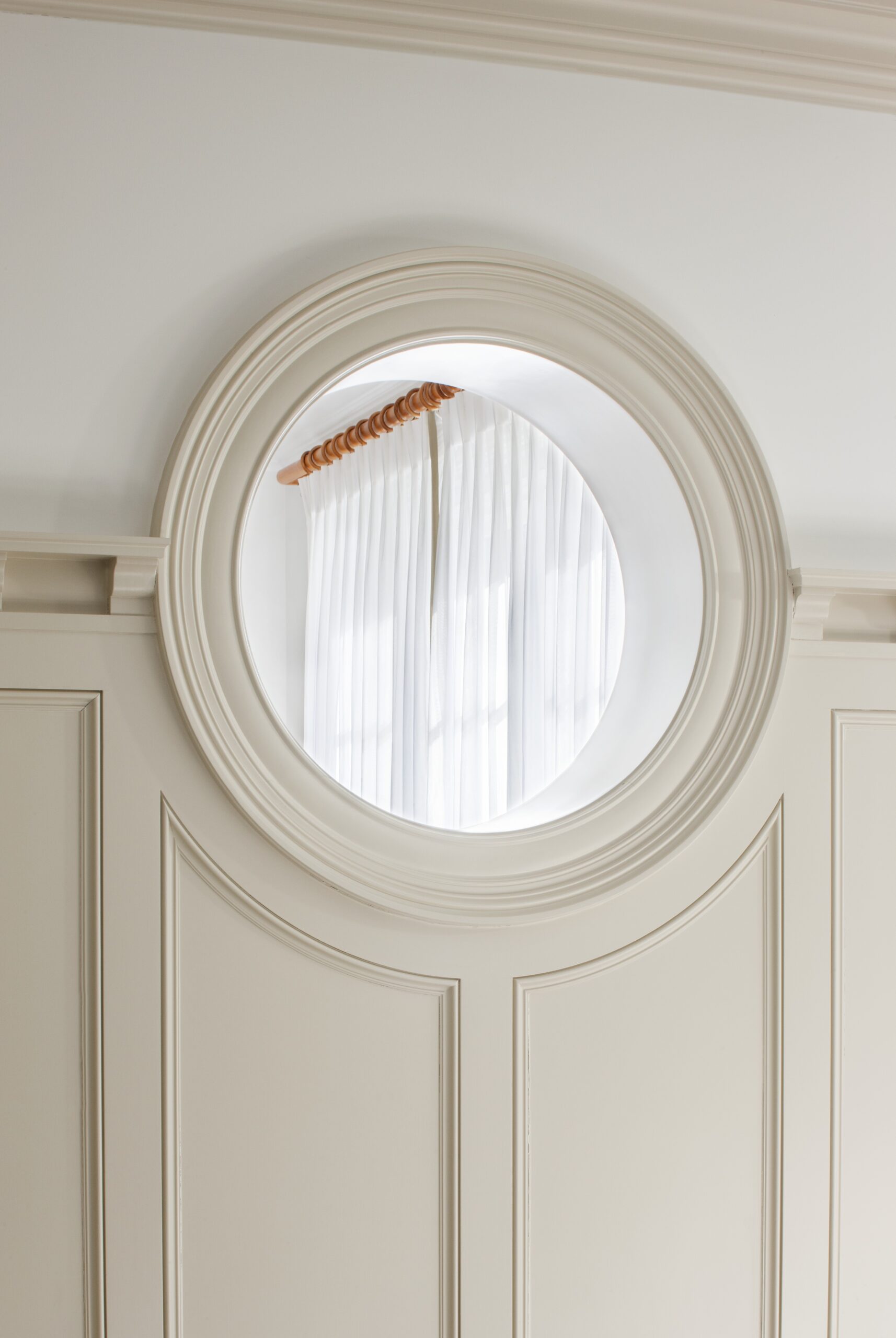 An interior window between the family and breakfast rooms 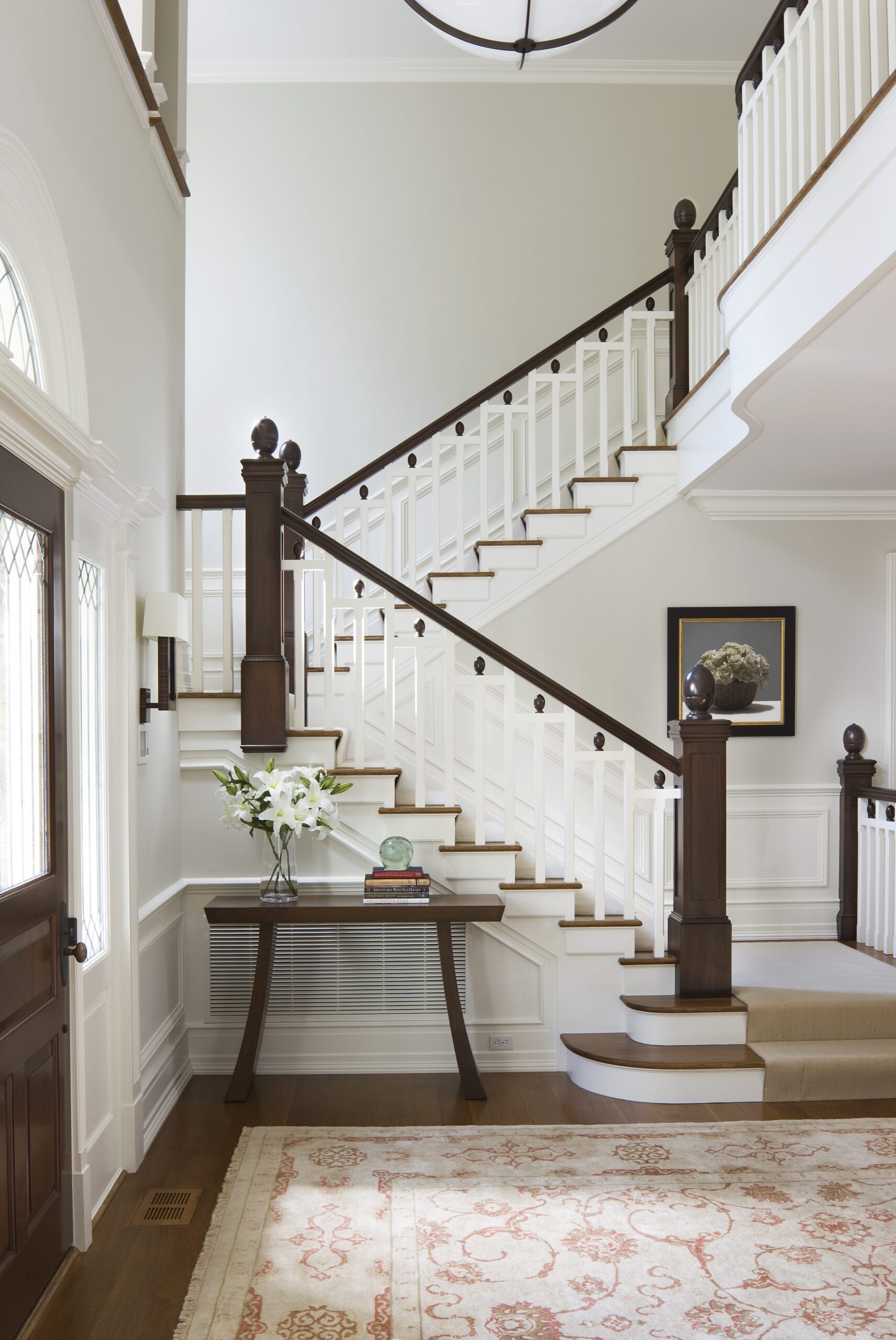 On the main stair, the mahogany rail and acorn-shaped details contrast the white square posts with chamfered edges. 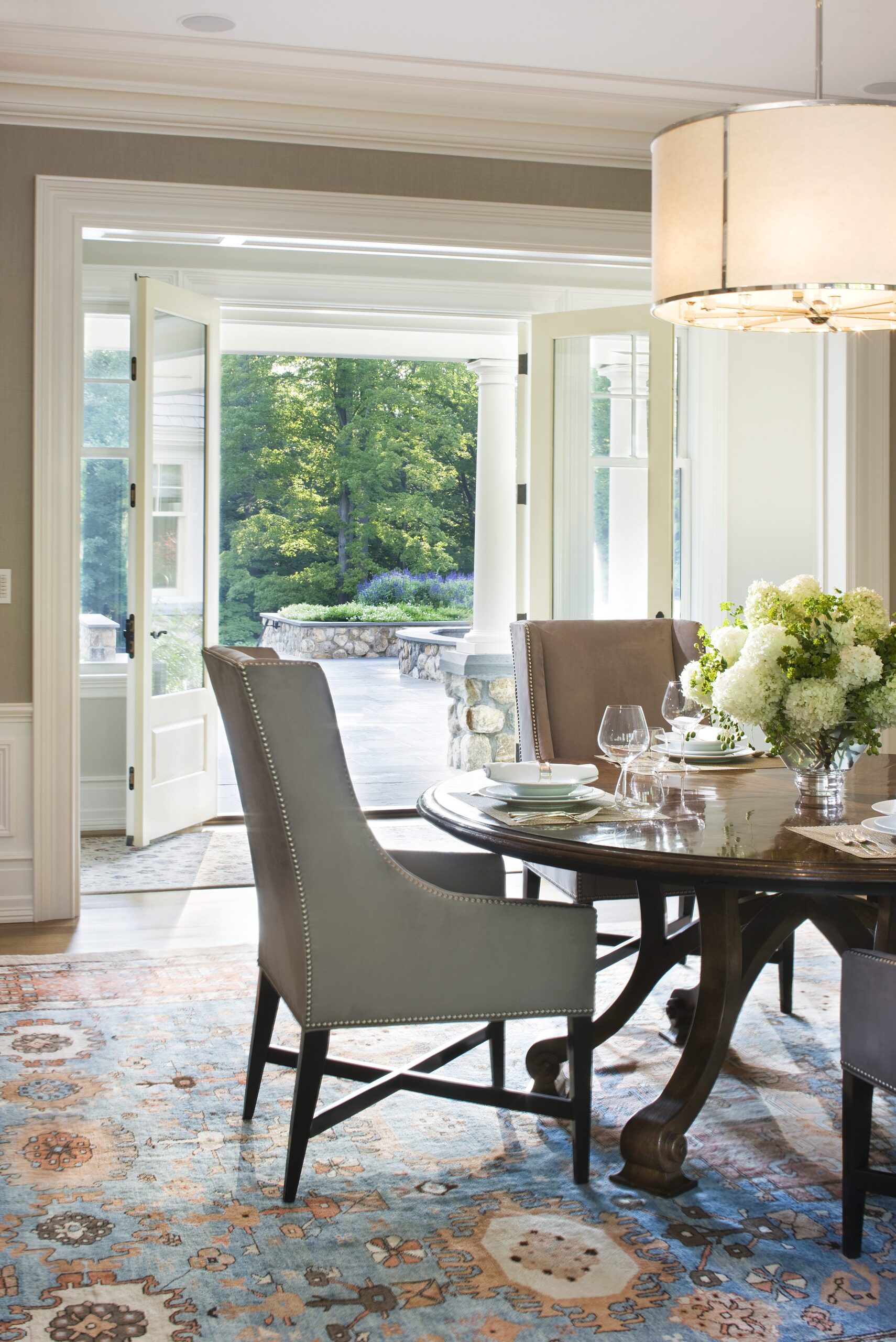 The narrowness of the house allows the dining room to have light and views to both the east and west. 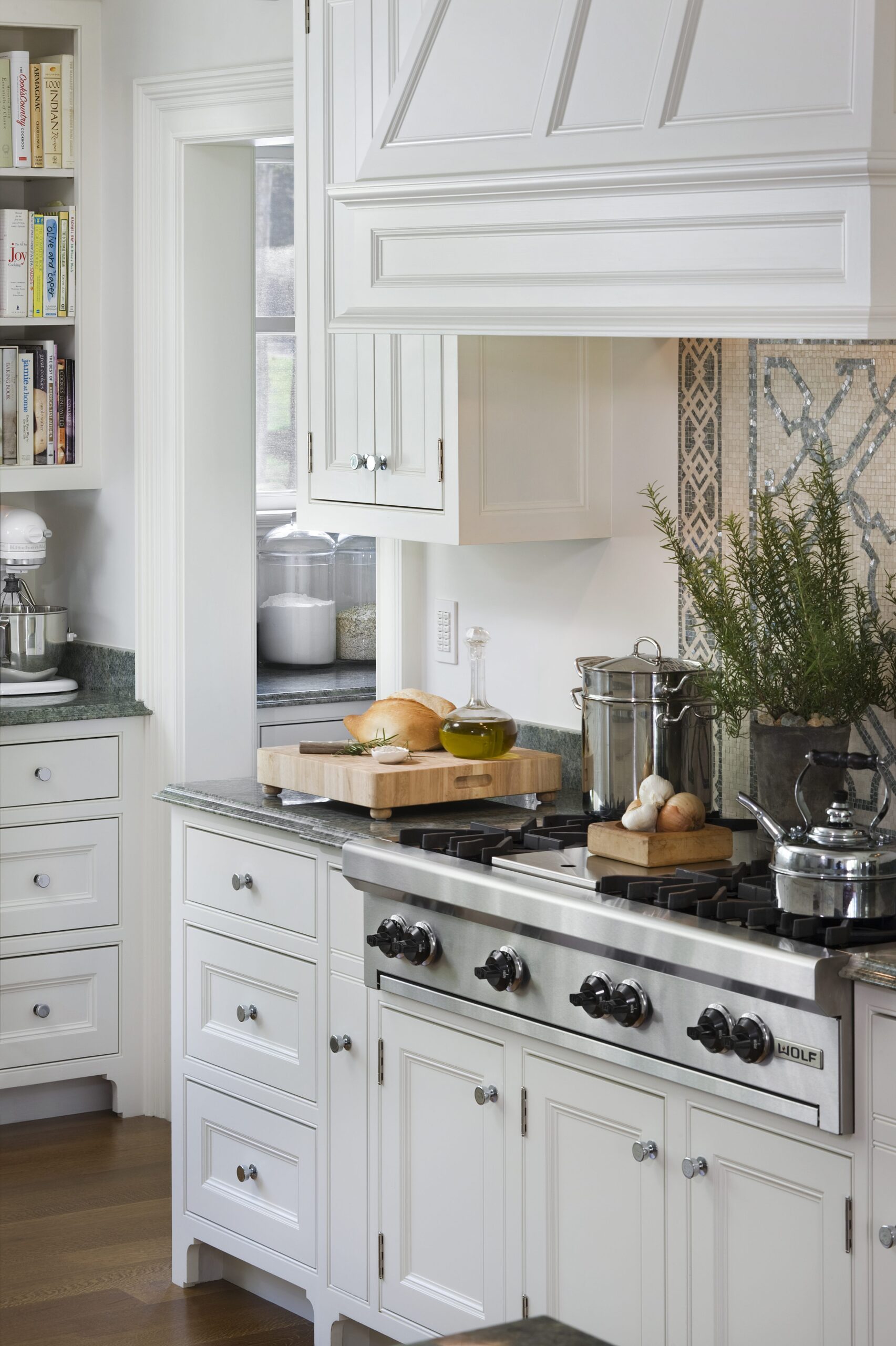 A pantry opens off of the main kitchen area. 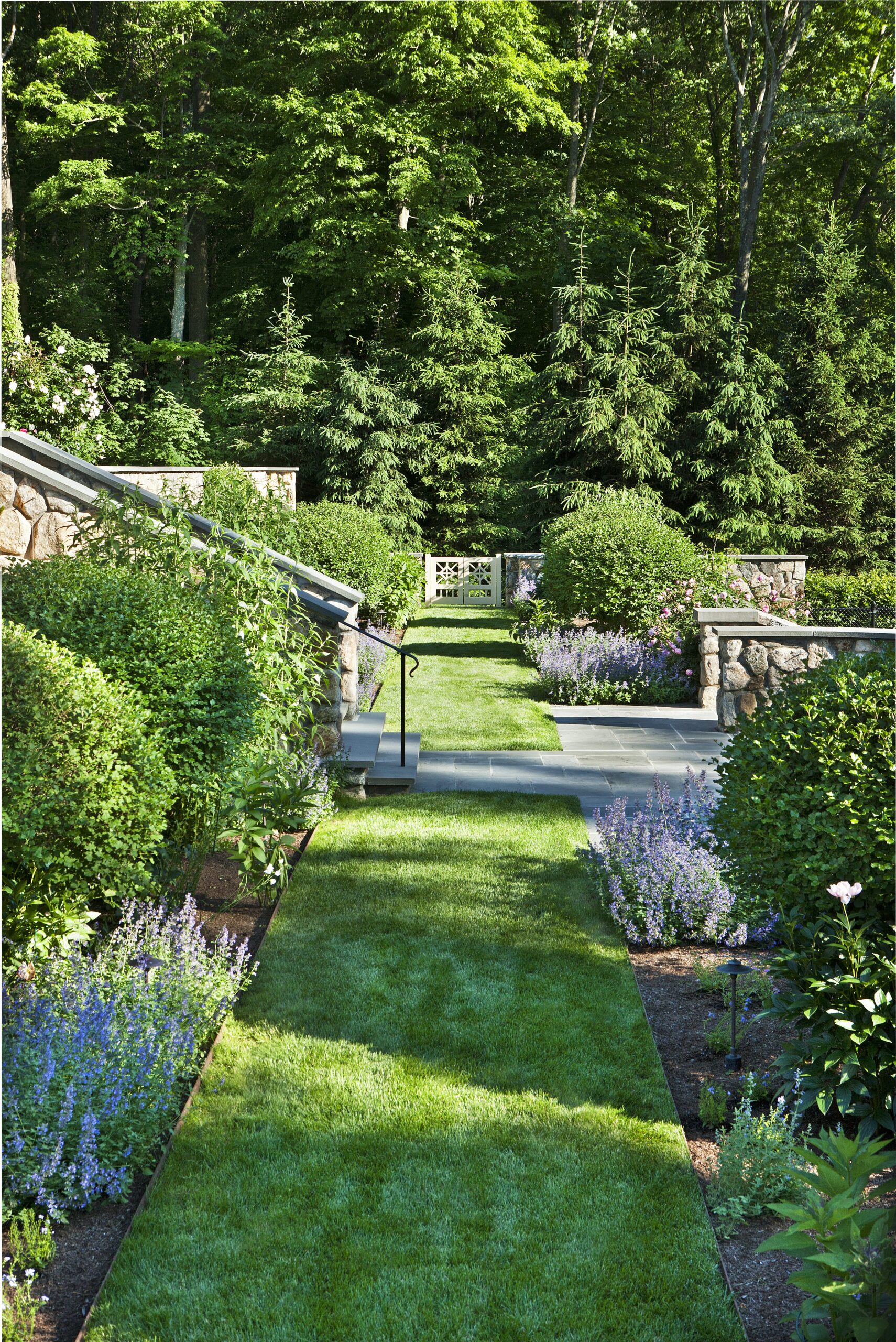 A grass path connects the various sections of the lower terrace. 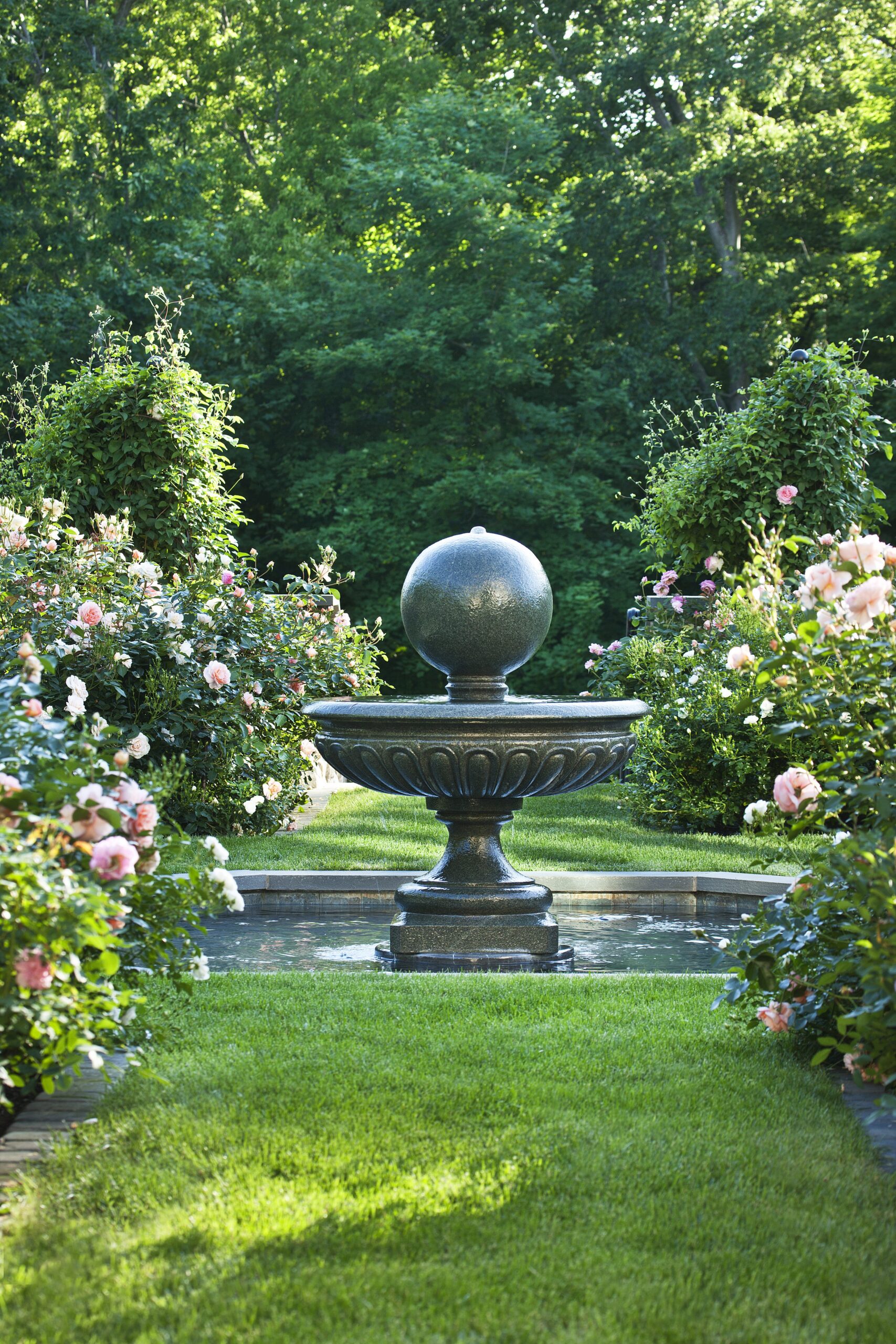 A fountain and octagonal pool marks the center of the rose garden.

Set on the crest of a west-sloping ridge in Fairfield County, this expansive Shingle Style house has a long, relatively narrow plan that Wadia Associates designed to take advantage of the site. With the long side fronting the road, it has a strong street presence. Wadia Associates tempered its size with two gables, each of a slightly different personality—a design technique used by architects such as C. F. A. Voysey at Moor Crag (1898), his seminal house in England’s Lake District. Separated by the shallow octagonal bay of the dining room, the southern gable houses the main entrance; its delicate and more pronounced details—an arched porch and leaded glass windows—suggest access to the public rooms of the house. The roof sweeps down to a side porch off the library. Meanwhile, the simpler and more rustic northern gable provides entrance to the mudroom and kitchen area. Upstairs, two small north-facing sleeping porches—formerly a must-have in the days before air conditioning—create a lookout over the yard from the children’s bedrooms. At the same time that the rhythm of the façade serves to downscale the rambling length of the house, the fieldstone base, window groupings, leaded glass, and dormers add that texture and depth so vital to the Shingle Style.

Due to the narrow footprint, many of the rooms have two exposures, letting in both morning and evening light. A long north-south running gallery connects the individual rooms, including the veranda overlooking the western view, enabling a casual interaction between the spaces. To fit the clients’ lifestyle, Wadia Associates designed the interiors to be informal yet elegant, with simplified details to harmonize with their more transitional furnishings. Throughout, profiles and moldings are restrained and spare. In some spots, however, architectural elements are more robust: in the master bedroom, a columned entry vestibule and arched dormer window are incorporated. Other rooms are more luxurious. The master bath, for example, enjoys light from three exposures as well as a fireplace next to the tub.

To the west, the house opens up to a network of allées and outdoor spaces that work in tandem with the design of the house. Set on axis with various rooms—the library, living room, and gallery—the landscape unfolds in a series of terraces that step down the slope of the property into a tennis court at the base. While Wadia Associates designed the east-facing façade to feel sturdy and closed off from the street, the west-facing rooms are meant to enjoy their immediate connection to the outdoors. Areas for entertaining, dining, and swimming, outlined by fieldstone walls and embellished by fountains and plantings, lead to a charming rose garden centered on an octagonal pool also designed by Wadia. Visible from inside the house, this private outdoor oasis—part and parcel of the overall design—adds to the magic of this property.

Sited on a west-facing ridge, the entrance facade of this long Shingle Style house is composed of two gables which gracefully sweep down to the ground. The projecting octagonal tower of the dining room separating the gables is detailed with a frieze ornamented with delicate Adamesque swags.

The west side of the property steps down in a series of terraces toward a rose garden designed by Wadia.

In the living room, the mantel is set into a paneled recess while a low wainscot wraps the walls.

The master bedroom, divided into a sitting and a sleeping area, is centered on a large arched window; a columned vestibule connects to the dressing areas and bath.

The master bath has a gas fireplace above the tub.

A fountain separates the more formal parts of the terrace from the pool and play area. A second floor sleeping porch off of a child’s room looks out of the gardens.
VIEW PORTFOLIO