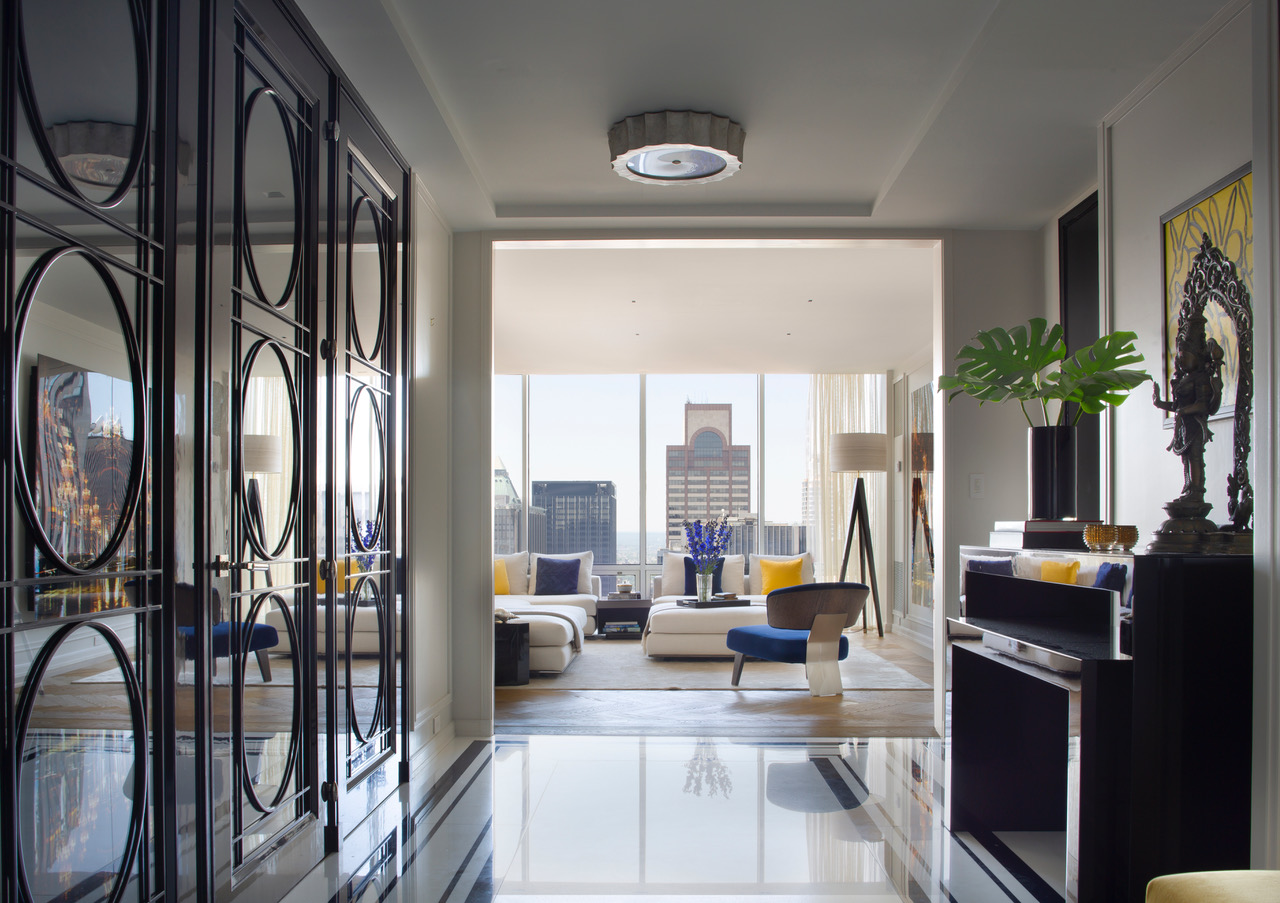 Once the family had outgrown their two-bedroom apartment in Olympic Tower (see page 340), they brought Wadia Associates on to renovate a second apartment in the same building. Fortuitously, two separate but adjacent suites on a higher floor had come on the market, providing a template for a much larger space. At one point, they had belonged to a movie star and subsequently a Saudi prince; a doorway internally connected the two units but the disparate spaces had never been formally connected. 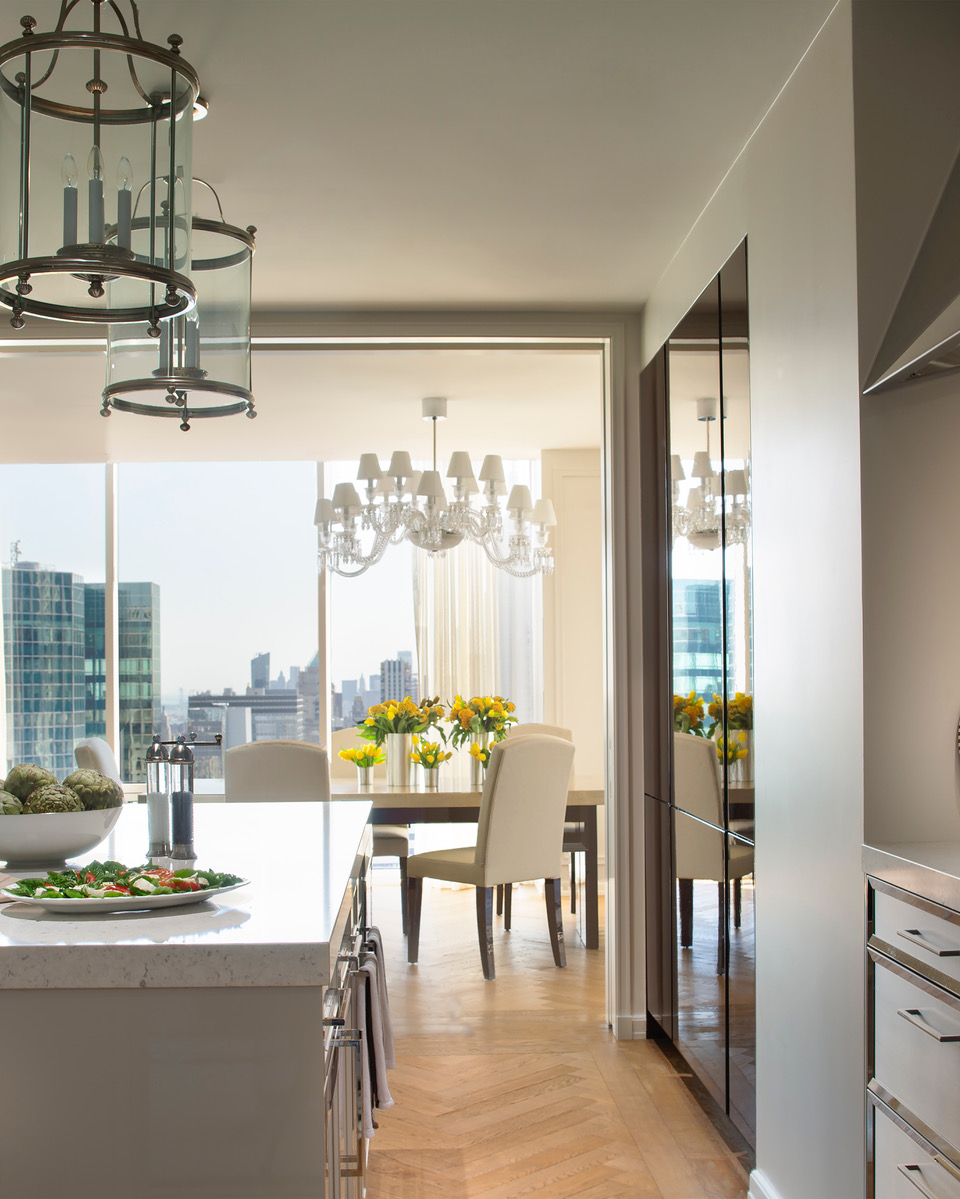 The kitchen is entirely open to the dining room, letting light into both spaces. When the owners entertain, hidden pocket doors can close the noise and bustle of the kitchen off from the guests. 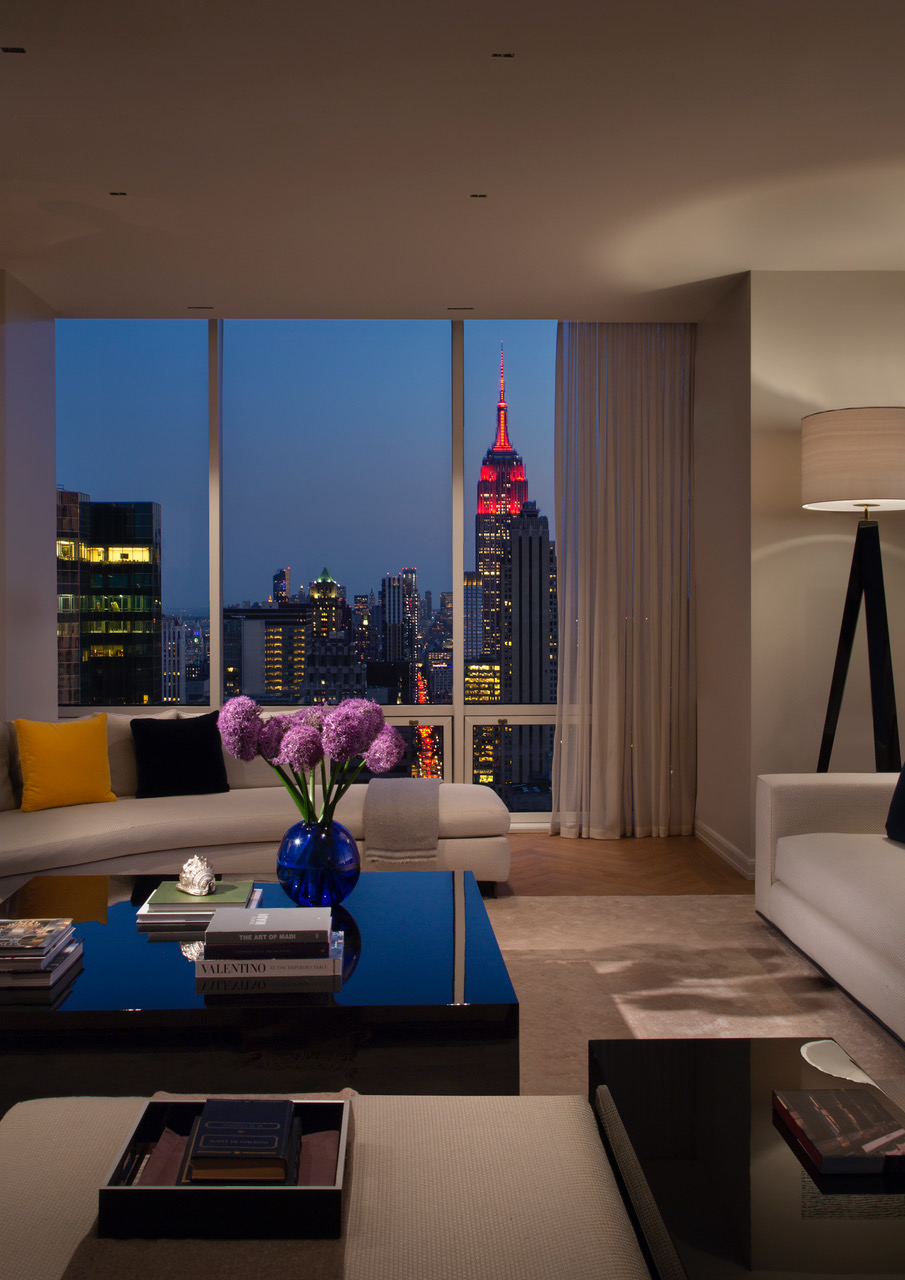 Highlighting an unobstructed view of the Empire State Building from the living room was an important factor in the design of the apartment. 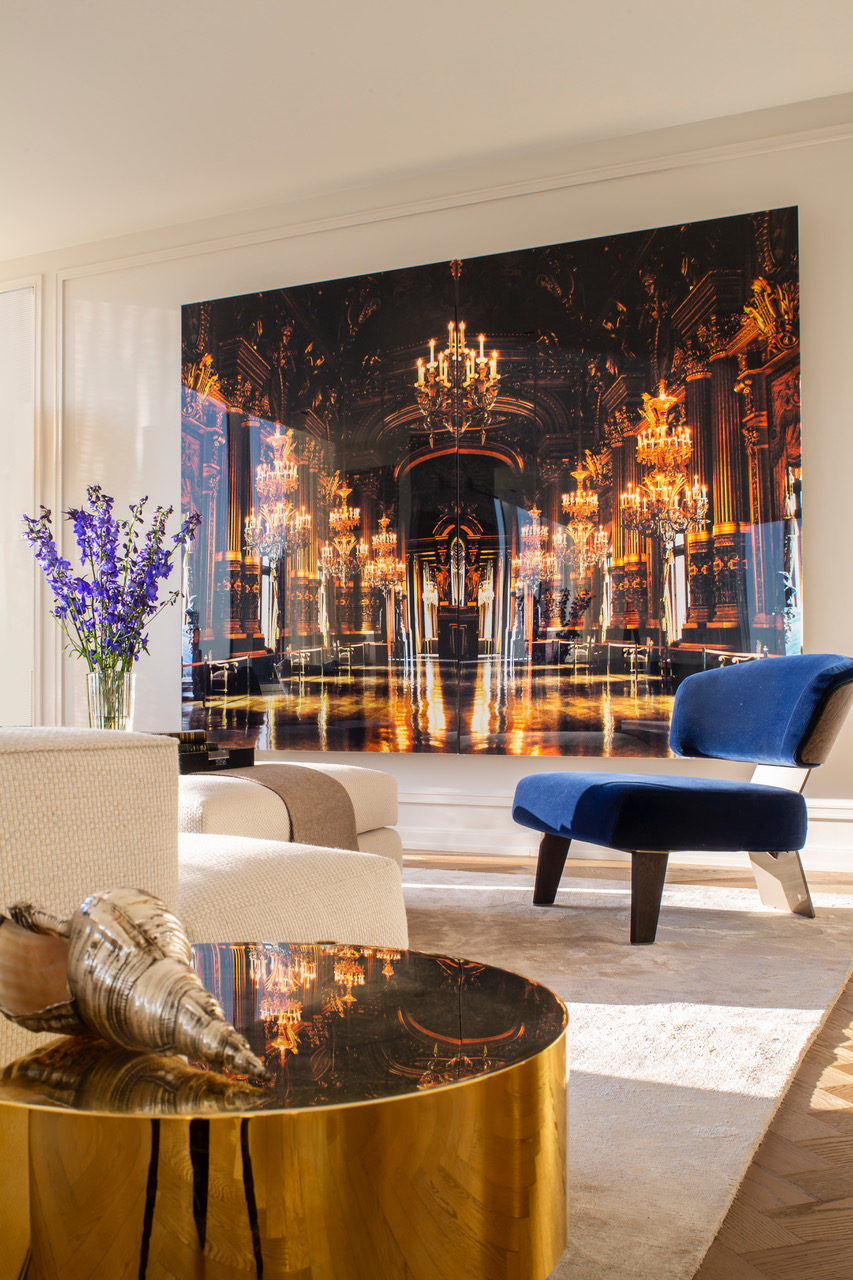 In the living room, the motorized panels of the photograph slide apart to reveal a television. 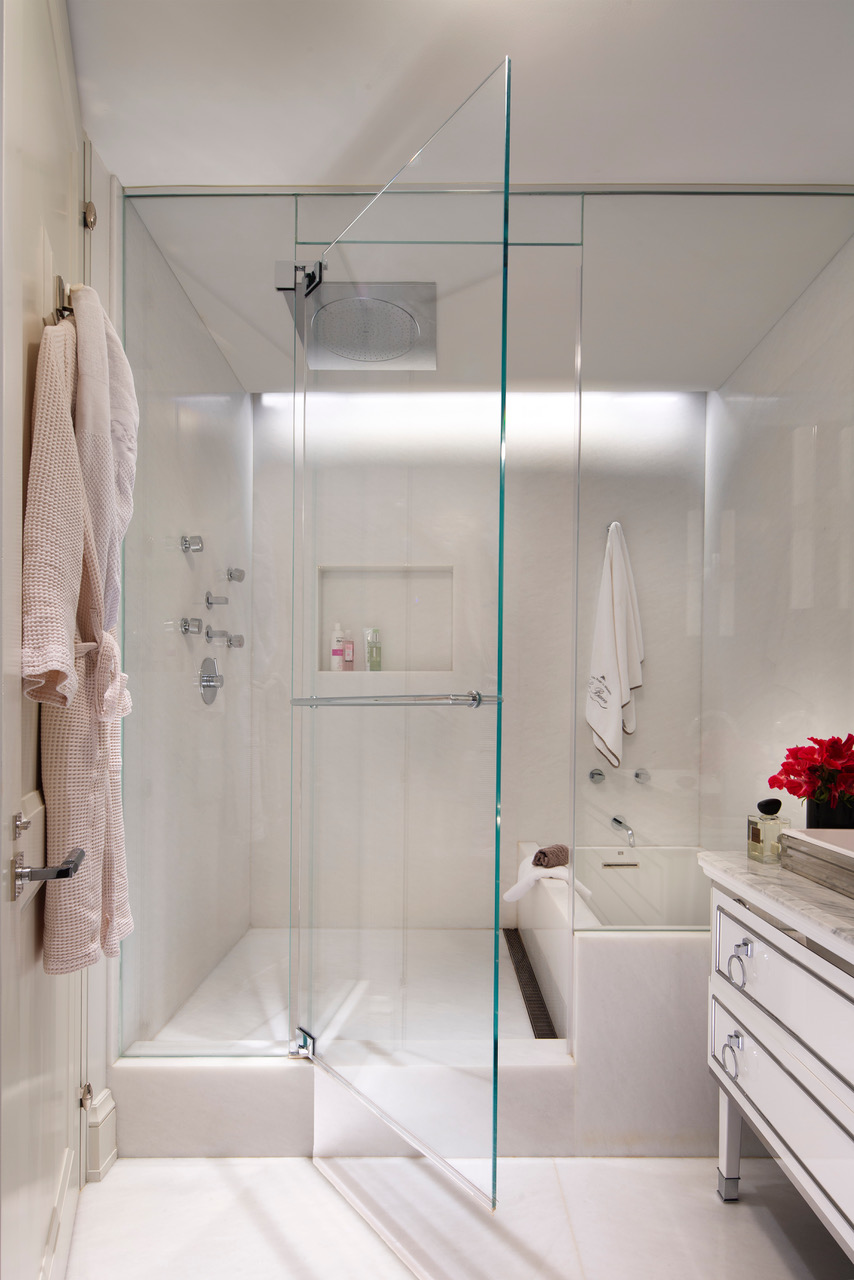 The custom master vanity with built-in flush linear lights floats above the book-matched slab floor. A strip light behind the mirror makes it appear to float off the marble wall backer. 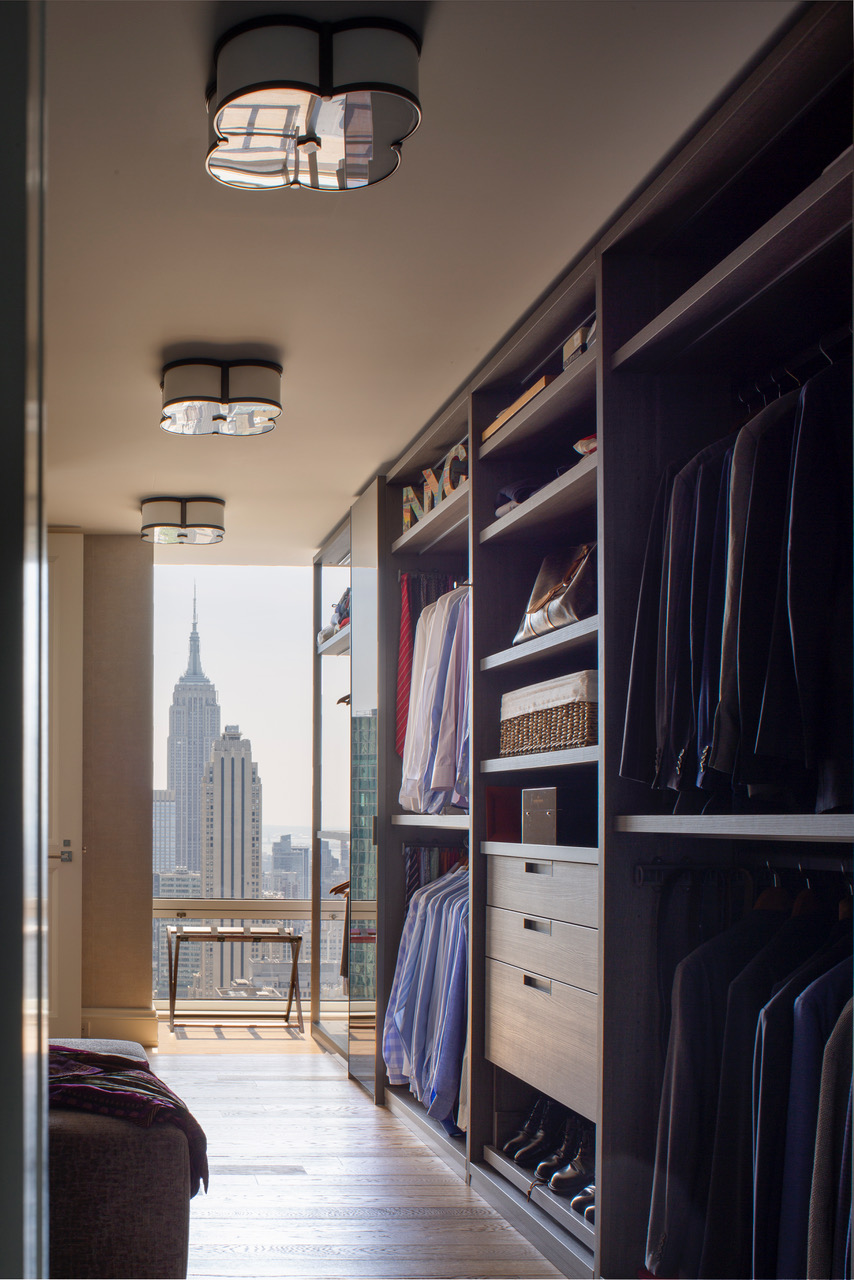 The design of the closet takes into account the view down Fifth Avenue.

Twenty floors higher than their existing unit, their new apartment possessed sweeping views down Fifth Avenue, from St. Patrick’s Cathedral to the Empire State Building, including the Freedom Tower and, on clear days, the Statue of Liberty, visible in the distance; however, since the finishes and details were outdated and the combined apartment had two kitchens, two masters, and so forth, the entire space needed to be reconfigured and refreshed. In contrast to the traditional style of their former apartment, the clients wanted something contemporary and chic. Wadia used moldings sparingly, designing them to be minimal and sleek, and placed an emphasis on the materials, articulating them cleanly with bold geometric strokes. Great pains were taken to maximize the ceiling heights and to showcase the floor-to-ceiling curtain wall—the apartment’s greatest asset.

Embellished with bold black-lacquered and mirrored panels and a black-and-white marble floor, the entry hall opens directly into the living room with expansive views of the New York skyline. Off the foyer, a hallway extends to the bedrooms. The dining room and sleek modern kitchen are separated by a pocket door, which can stay open for casual dining or be closed off when necessary for more formal events. Richly stained wood floors, highly polished nickel-framed millwork, and Baccarat crystal light fixtures work in sync with fine Italian furniture to create the perfectly chic apartment, floating over the New York skyline, about which the clients had dreamed.

A bank of custom black-lacquered and mirrored panels adorns one of the walls in the foyer while an opening into the living room frames the views.