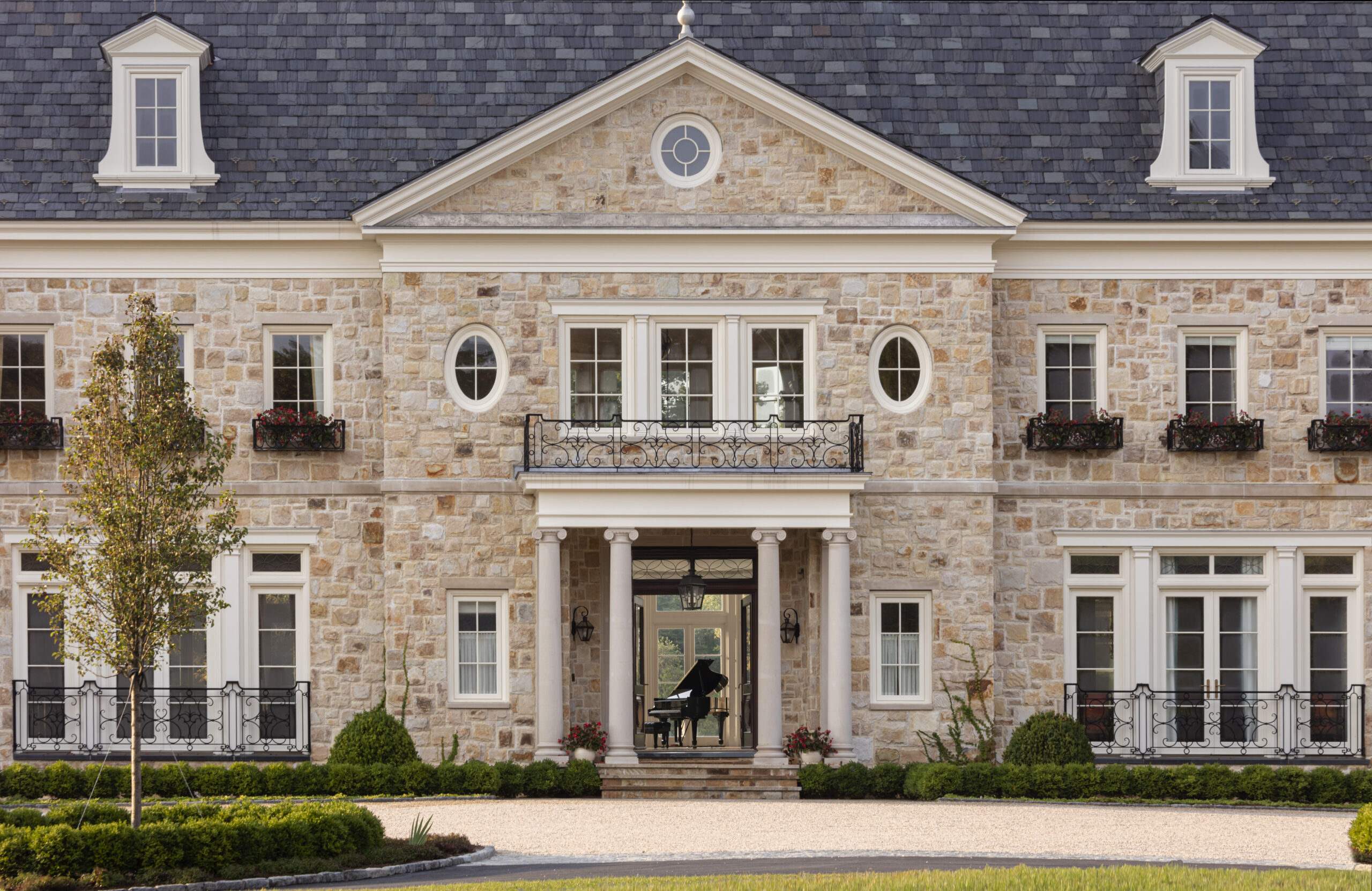 Set on an open park-like property fringed with trees, this house was inspired by the late-eighteenth-century classical manors of France and England. The front façade is oriented to the north; the narrow east façade fronts the road while the balance of the house extends back through the property to the west. Clad in a honey-colored South Bay quartzite with Indiana limestone details and a gray slate roof, the main block is centered by a gabled entrance bay with an Ionic porch between two octagonal bays anchoring each end. Wadia Associates composed this formal symmetrical section to hold the entertaining (or public) rooms of the house while the family spaces step down gradually in scale to the west, ending with a diminutive story structure containing the upper half of a basement-level squash court. Since the family  quarters fall to the back of the site, they are naturally more private. 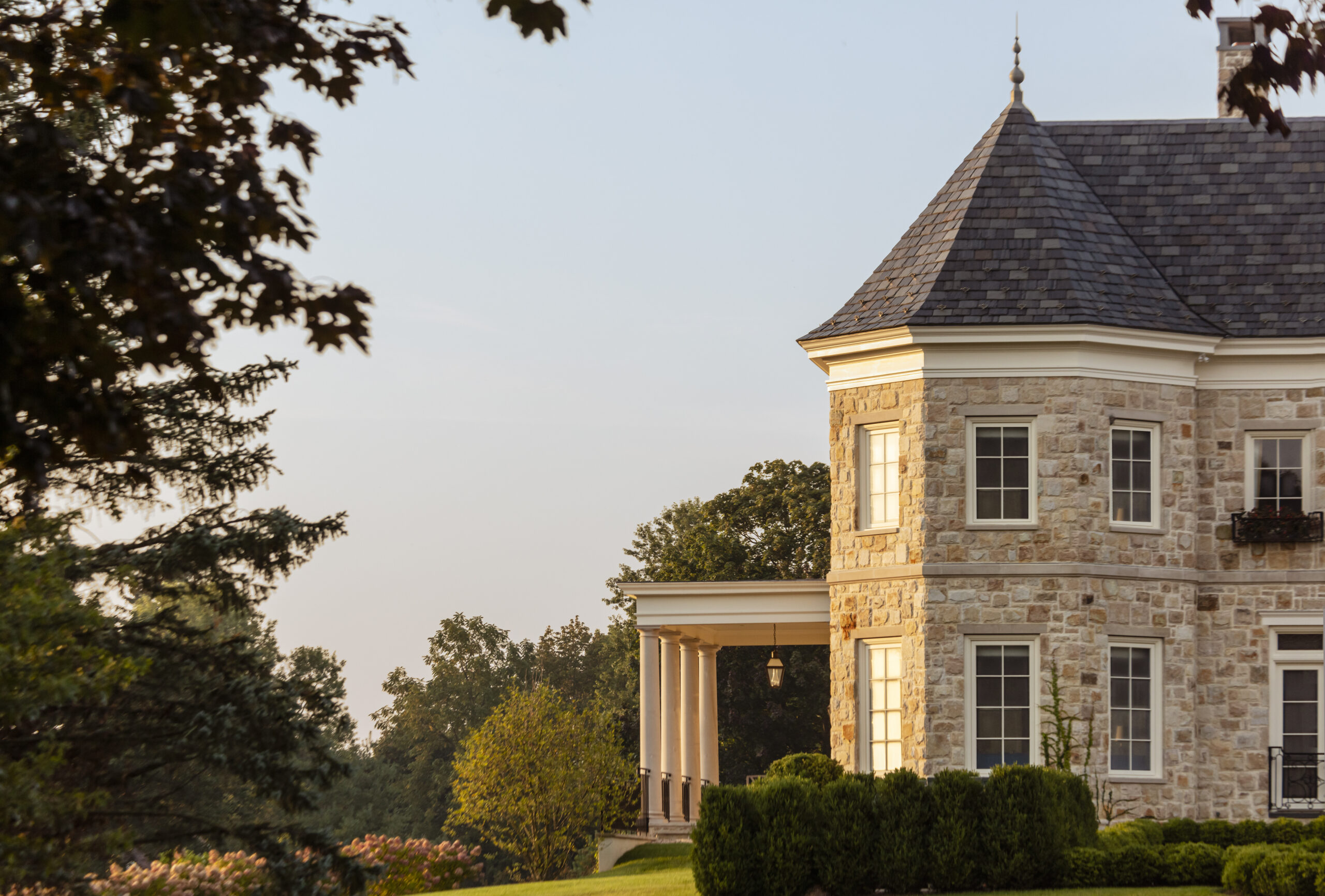 A porch off the east end of the house glows in the morning sun. On the first floor, the octagonal bay contains a window seat that is part of an entertaining space that owners refer to as a the "blue lounge." 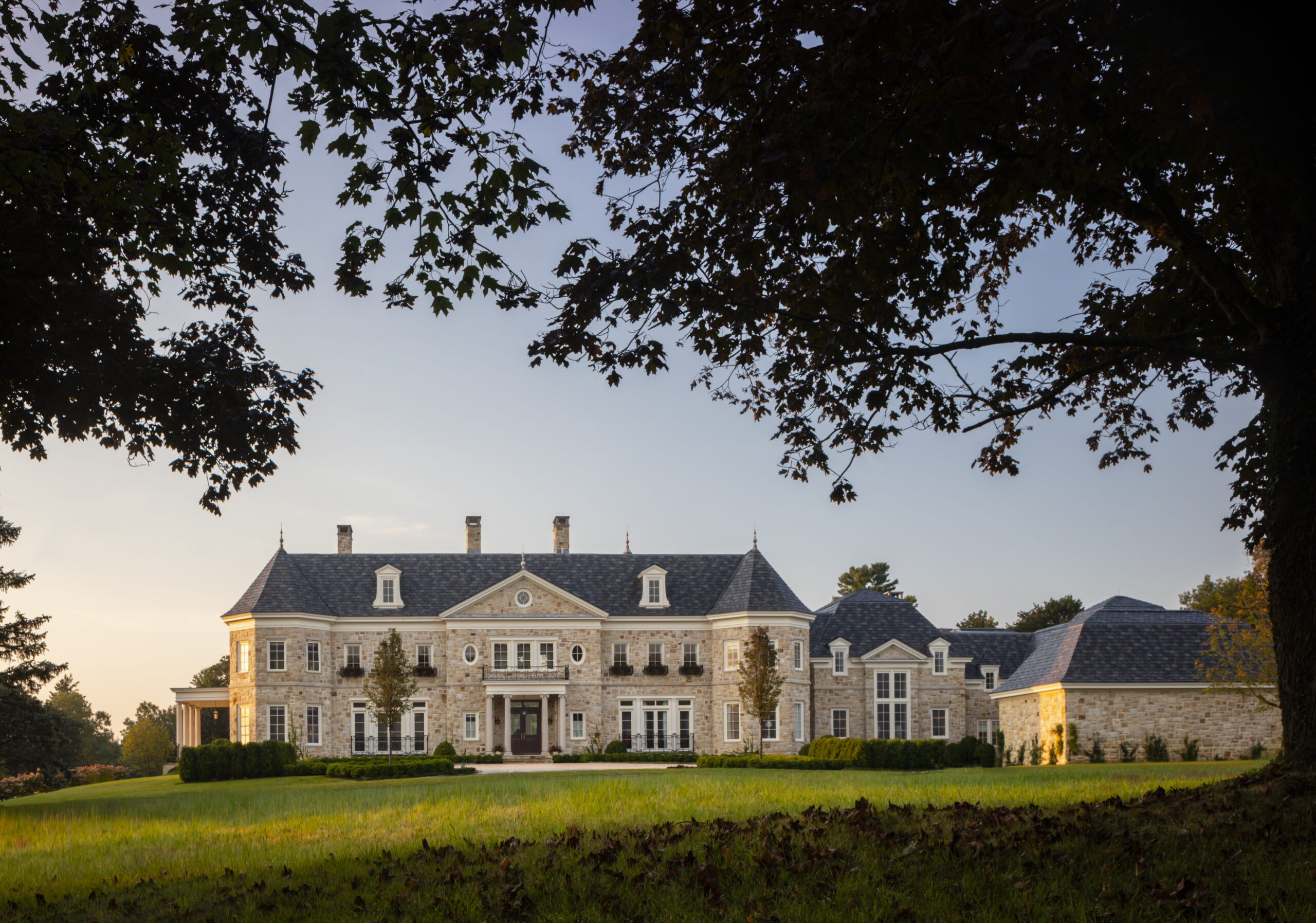 The house has a wide, open park-like site fringed with trees. It was carefully composed to give emphasis to the symmetrical main block of the house containing the entertaining rooms and to step down gradually in scale to the family spaces and finally to a basement level squash court to the west.

The design process differs for every project and, in this case, the clients—a couple with a large family—were very focused on how the spaces were laid out in relation to one another. There was extensive collaboration between the owners and Wadia Associates to achieve the right connection between all the rooms—a process that went through many refinements and revisions. One of the clients’ primary criteria was to have an entry that made an expansive statement while maintaining the privacy of the rest of the house. This brief led Wadia to design one of its most immediate and exciting entry halls. Inspired by the work of Sir John Soane, the late-eighteenth-century English architect who created mysterious effects with arches, curves, and light, this bright space opens in all directions.

Straight ahead, a double-height window bay bisected by a curving balcony brings light in from the south-facing rear yard. To the right, a white marble mantel anchors the room while a stair curves up to the left, and balconies with wrought-iron railings overlook the space from all sides of the upper level. The arched openings upstairs and the vaults of the ceiling create a dynamic balance, while the light from the large window floods the space with sunshine. 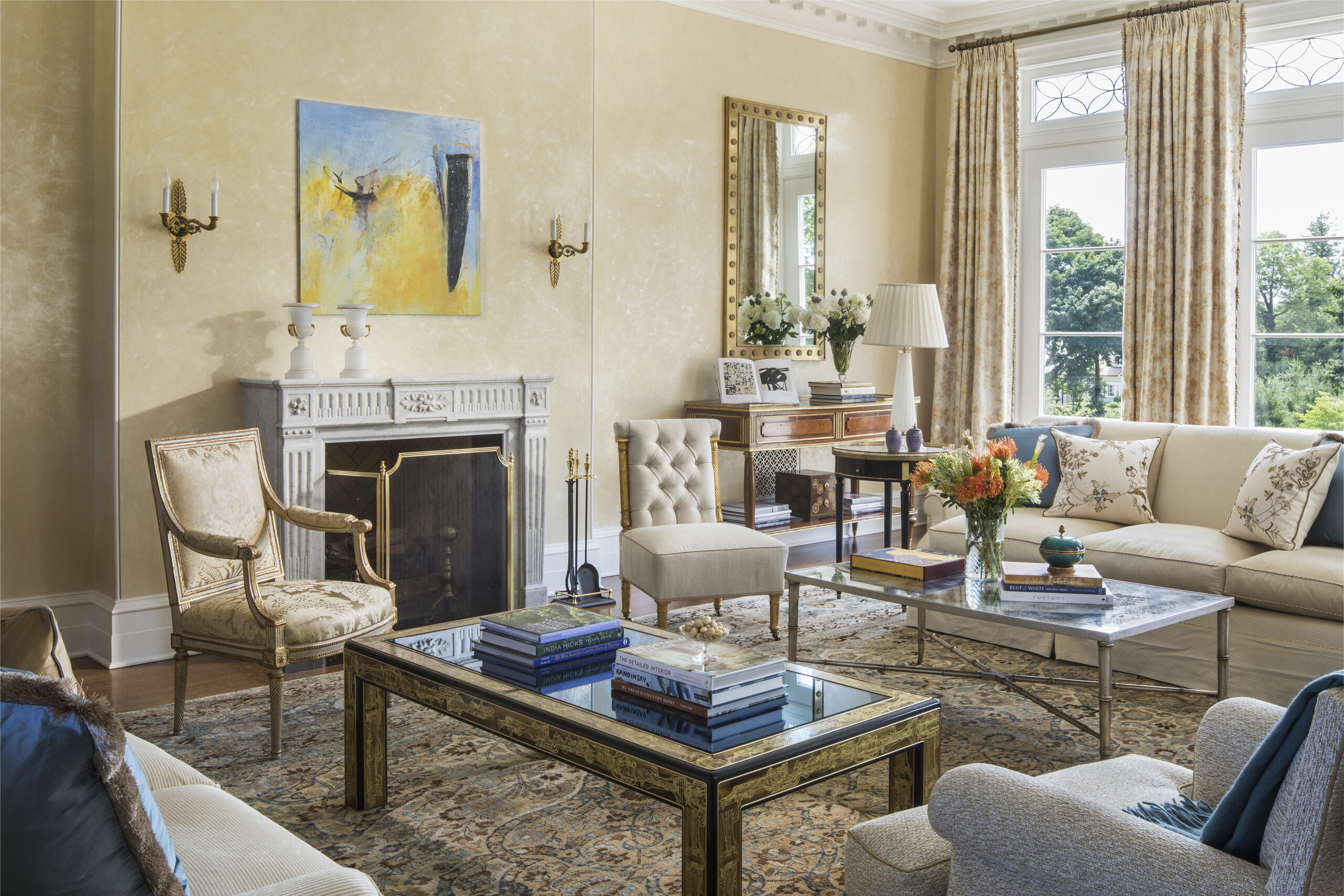 The transoms of the French doors in the living room feature a delicate oval pattern. 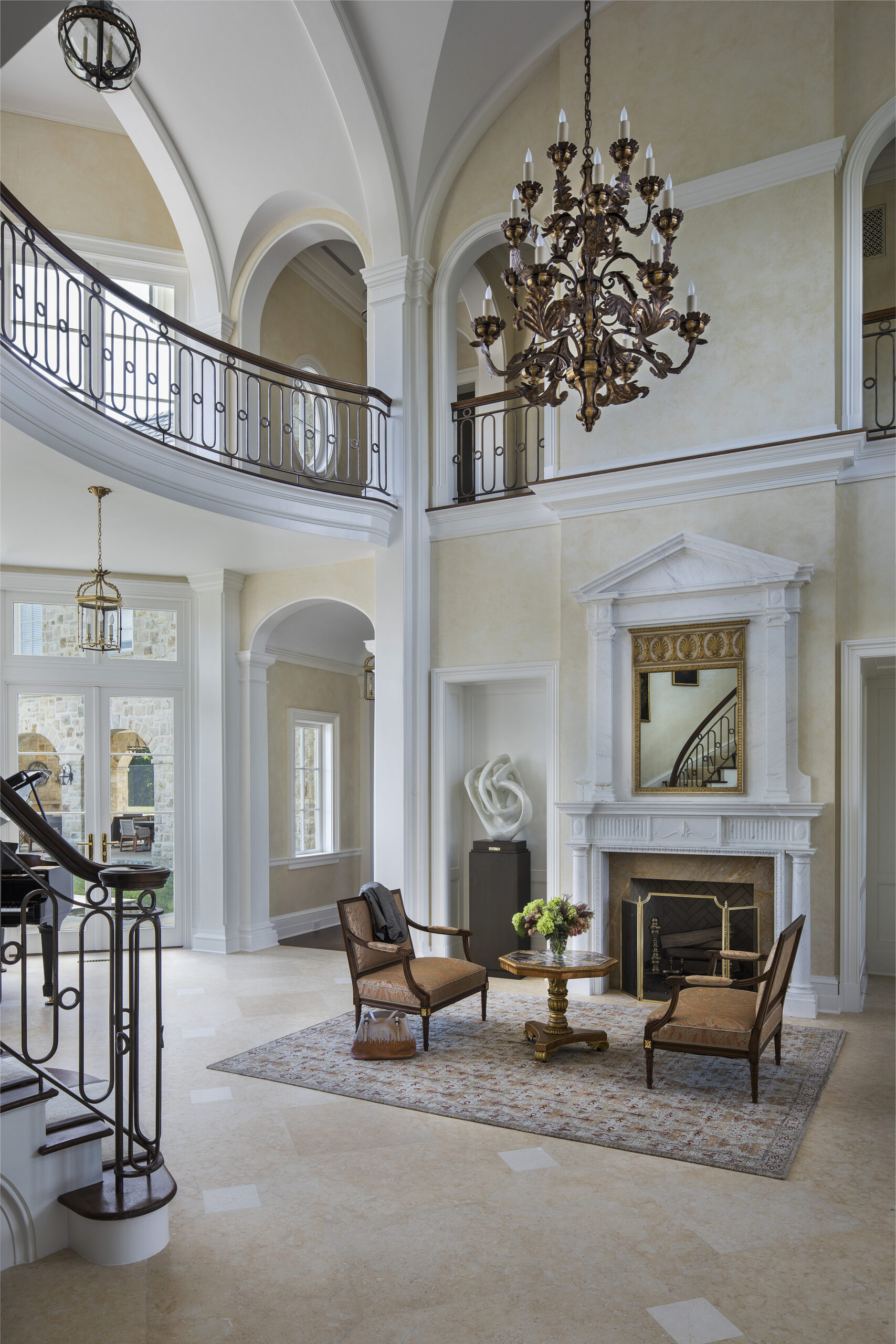 Following the client's wish for an impressive entry, Wadia associates designed a front hall with a vaulted ceiling inspired by the work of Sir John Soane. 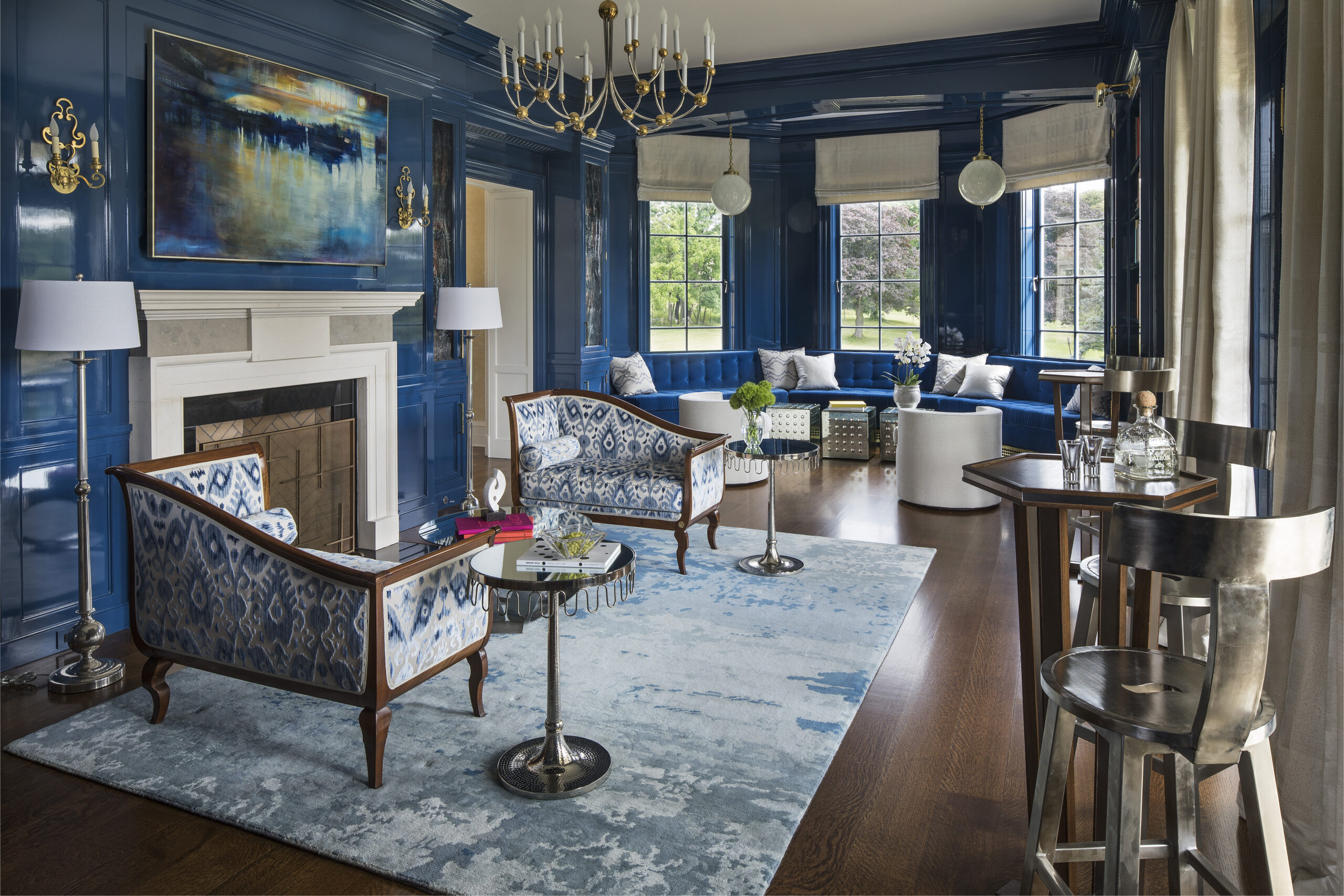 The color and the décor of the blue lounge was chosen by interior designer Cullman and Kravis. Originally designed as a library and office, the client suggested Wadia combine into one a spirited entertaining space. 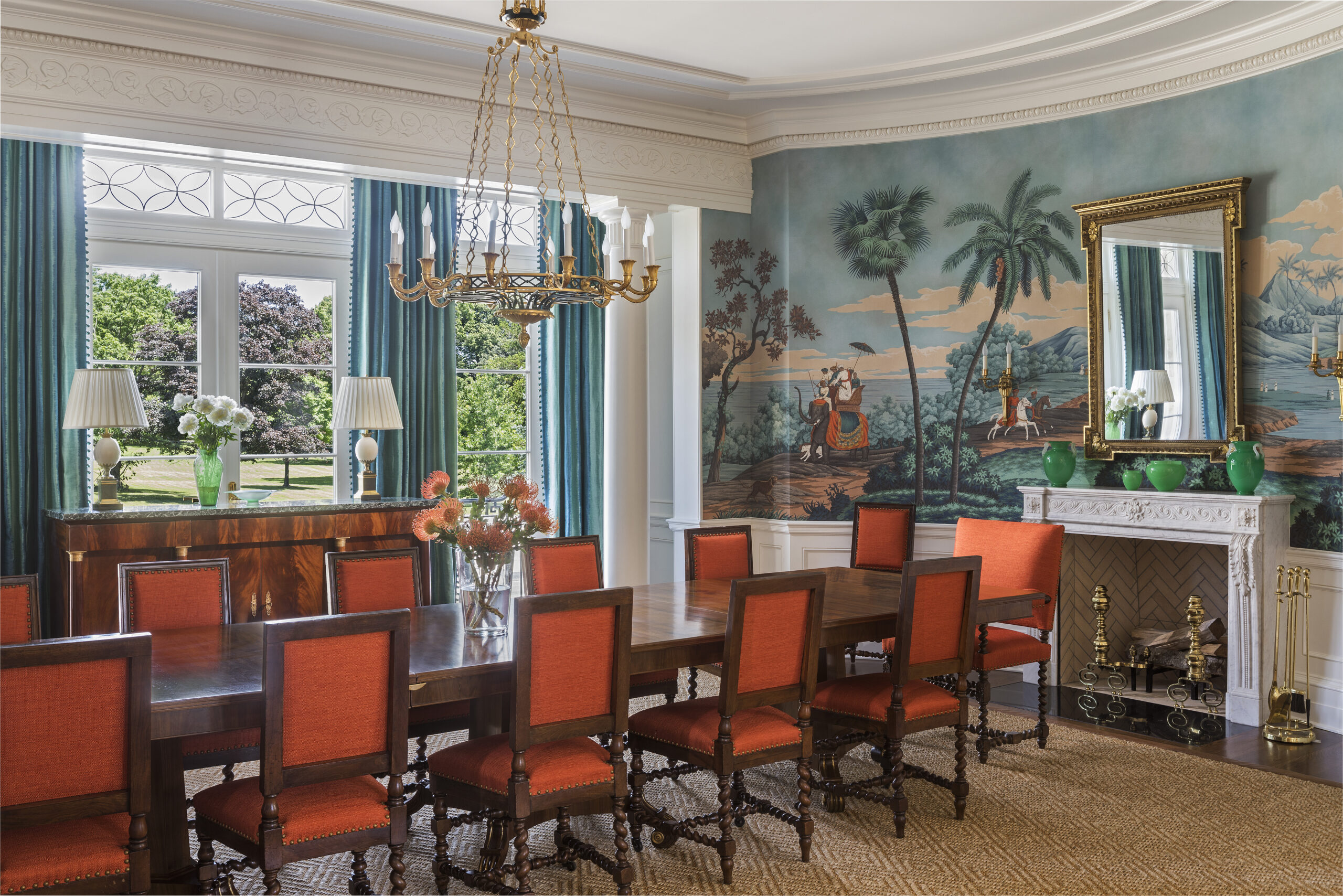 Scenes of India cover the two curved end walls of the dining room. With windows looking to the north, it is also open to a gallery on the south side. 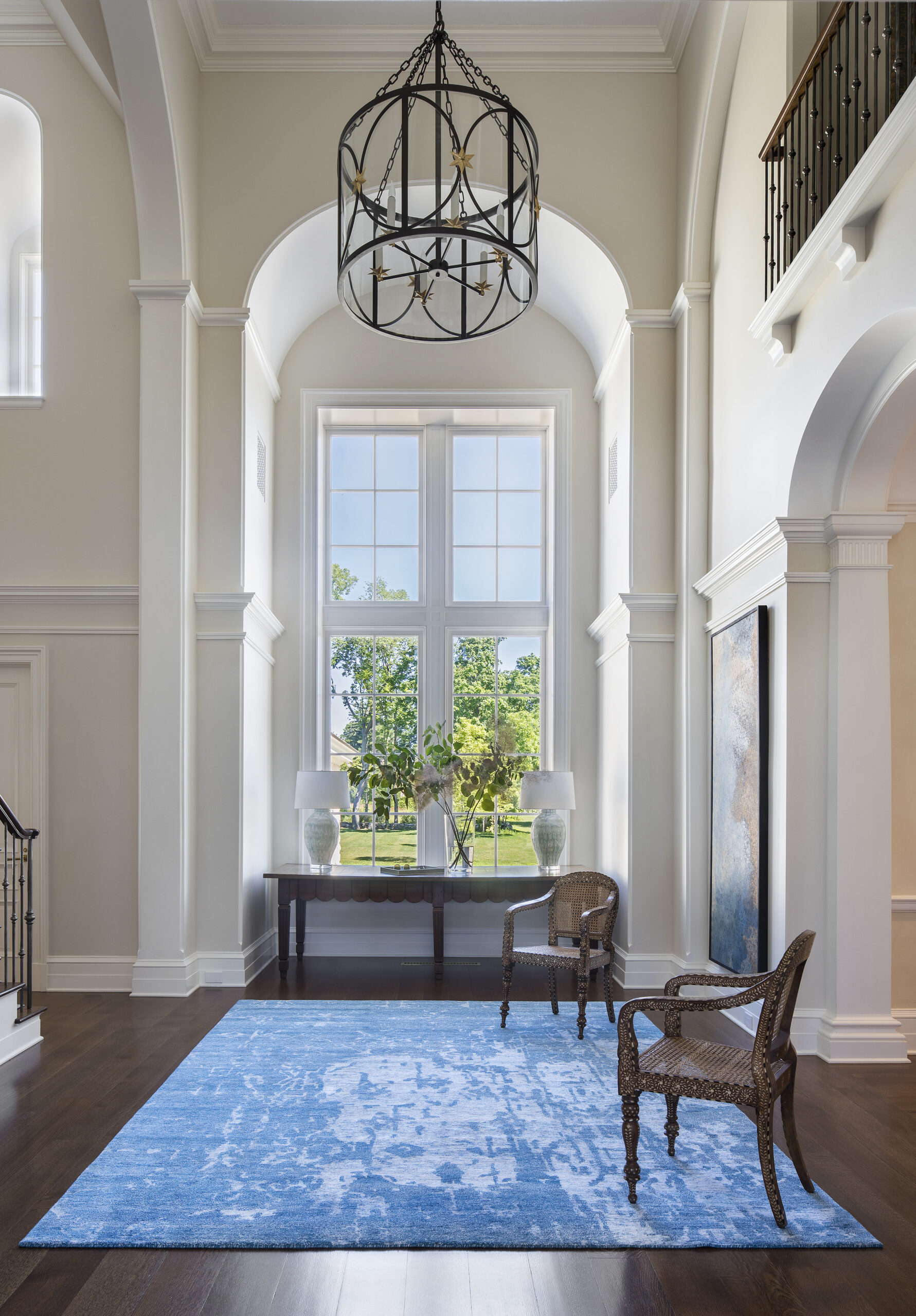 While simpler in design, the back-stair hall is just as exciting and interconnected as that for the front stairs. 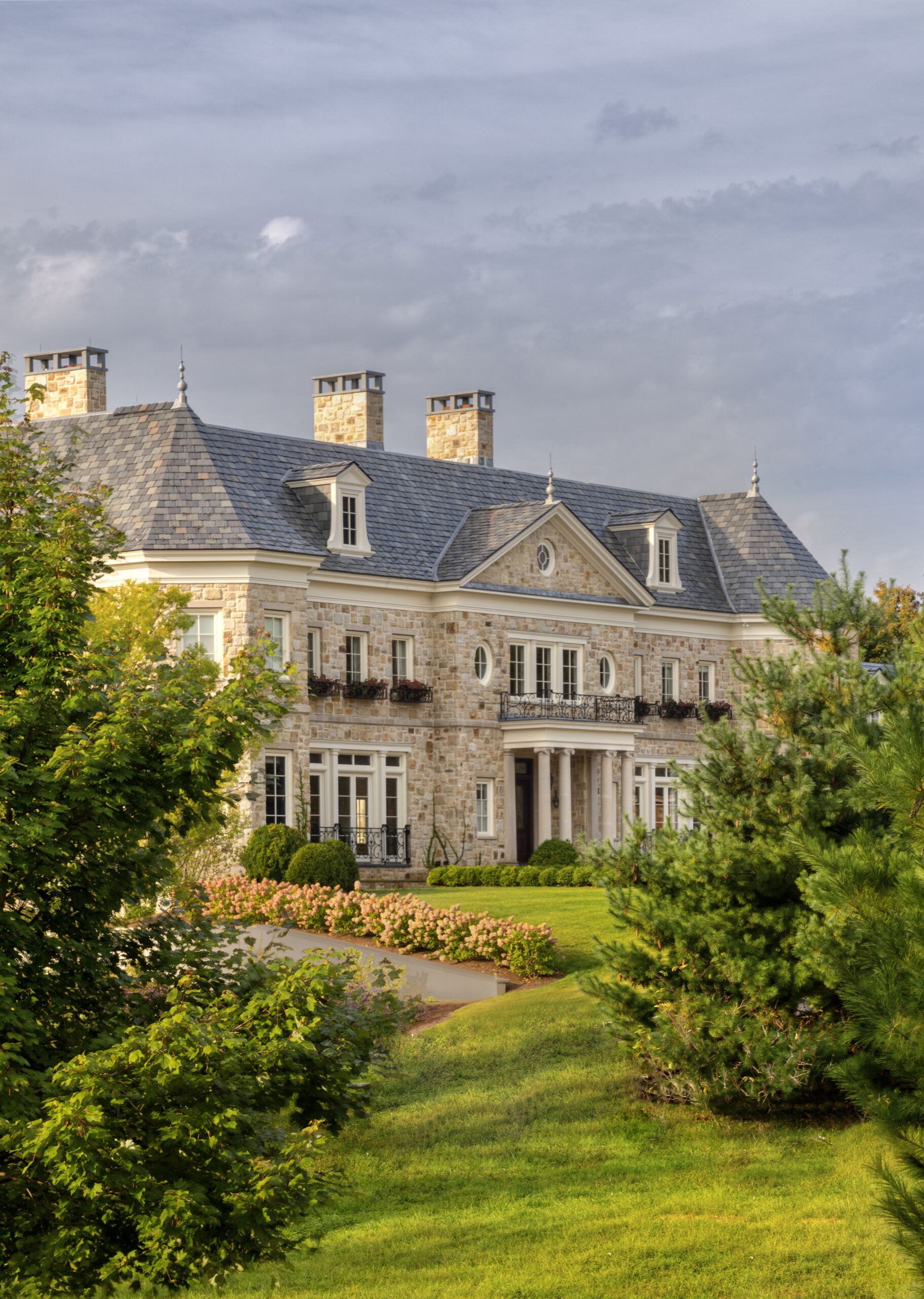 A corner view of the house as it is first seen from the entrance drive. 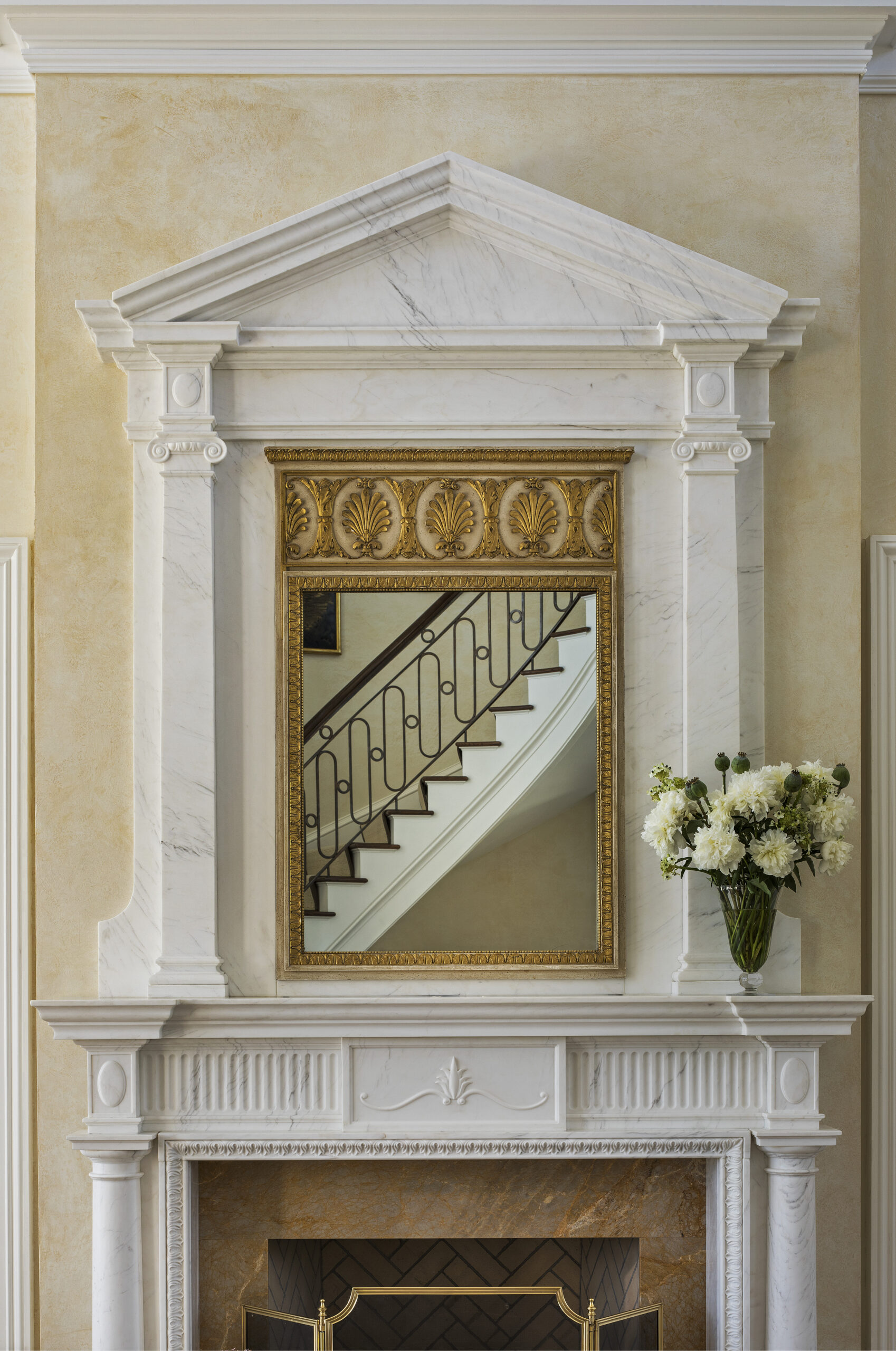 The white marble over-mantel of the entry hall fireplace was designed to hold an antique French mirror which reflects the curved stair on the opposite wall. 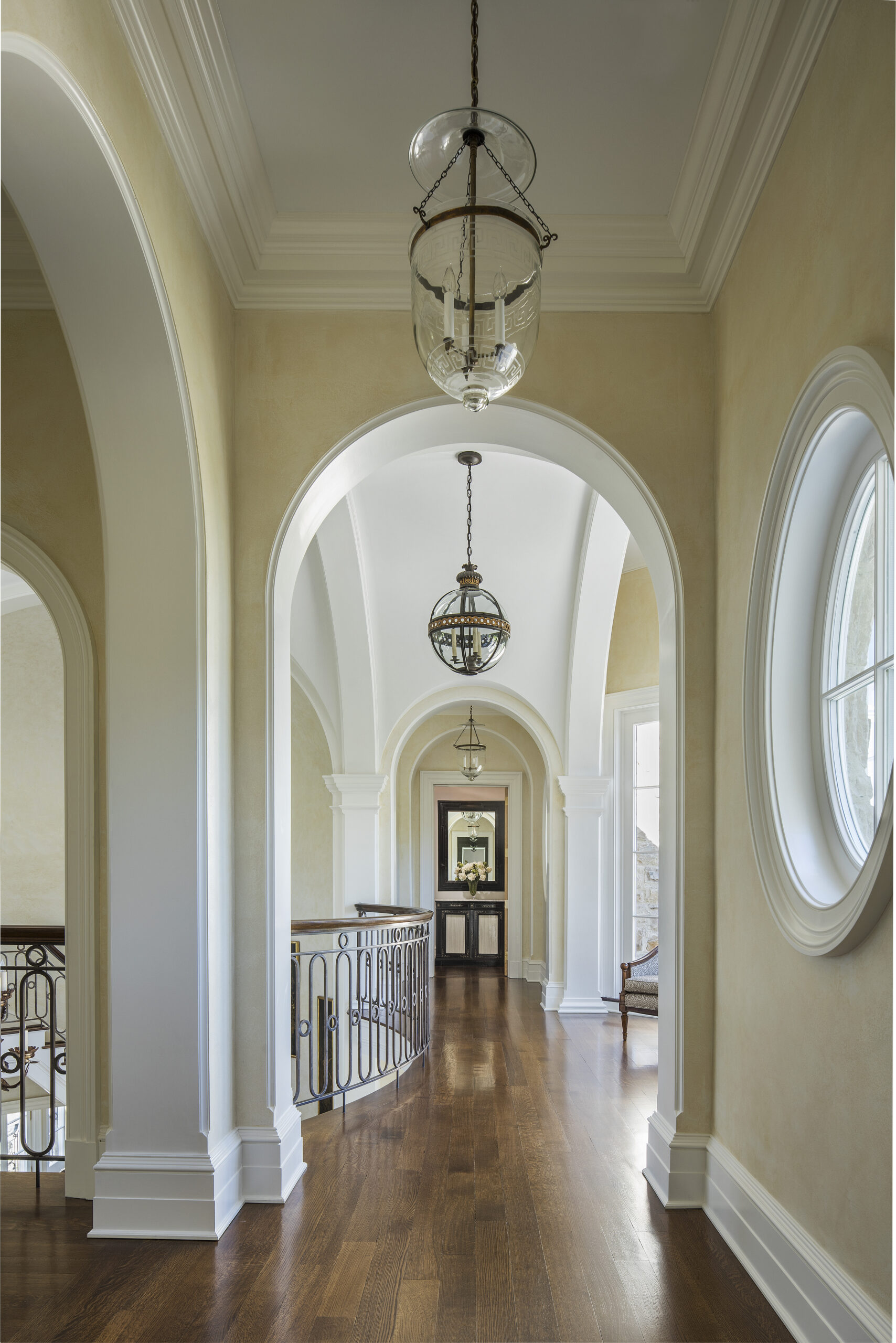 To the north of the living room, a stair to the lower-level wine cellar and game room curves down from an apsidal-ended gallery that accesses the blue lounge 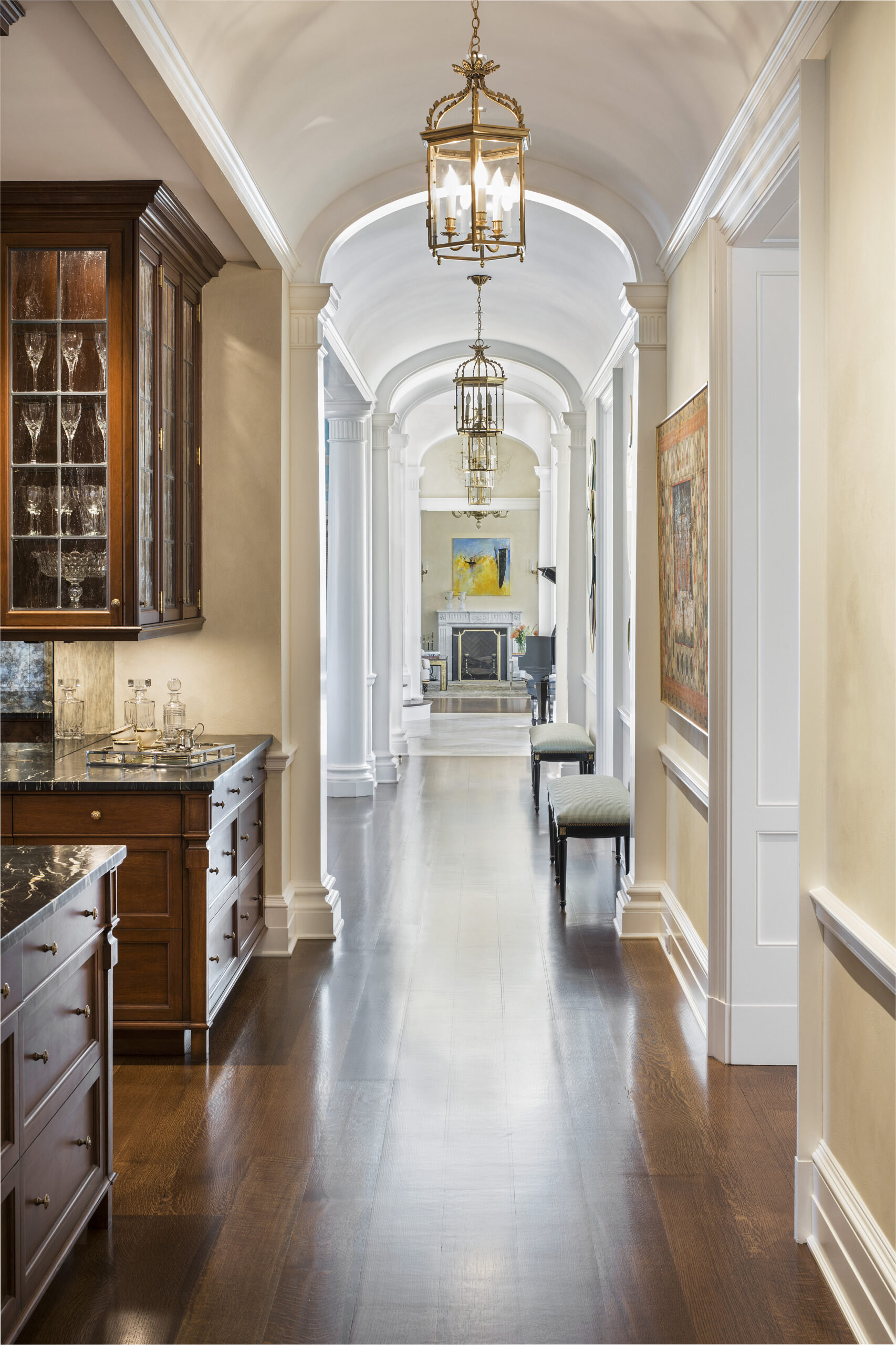 The primary axis through the house is delineated by a barrel-vaulted gallery of classical pilasters and arches centered on the living room fireplace. 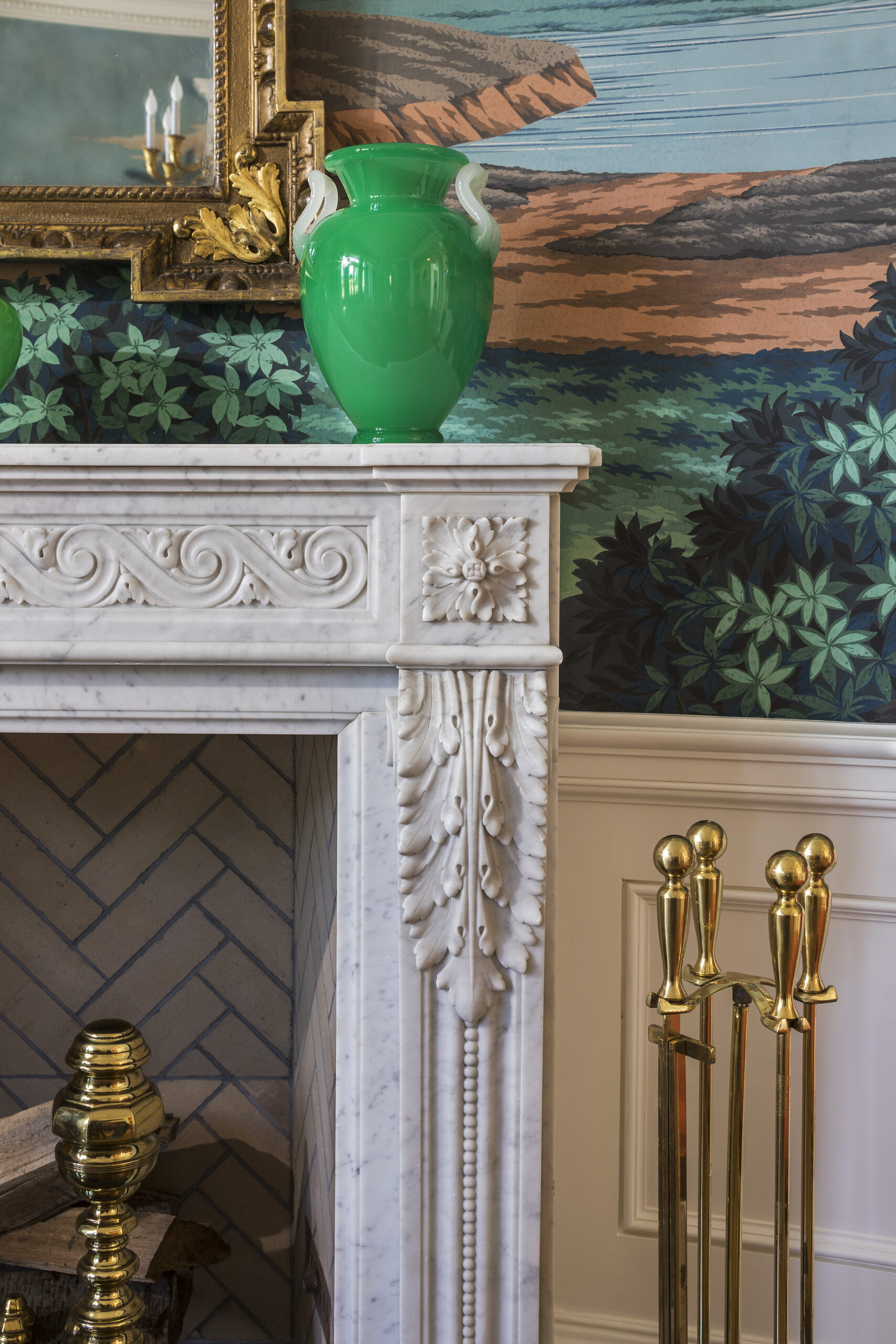 The carved marble mantel stands against the curved wainscoting of the room. 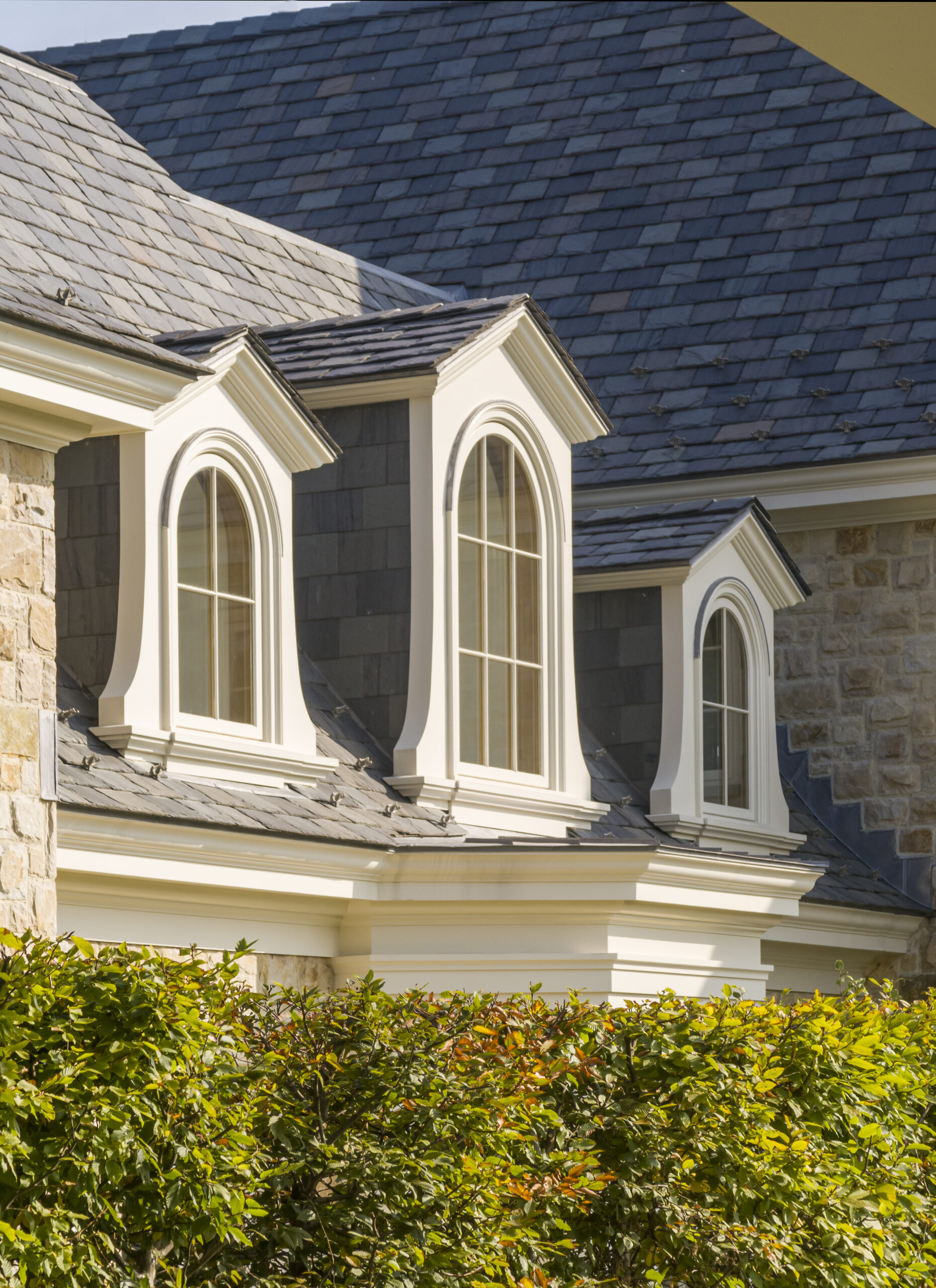 Three dormers let light into the upper reaches of the family room. 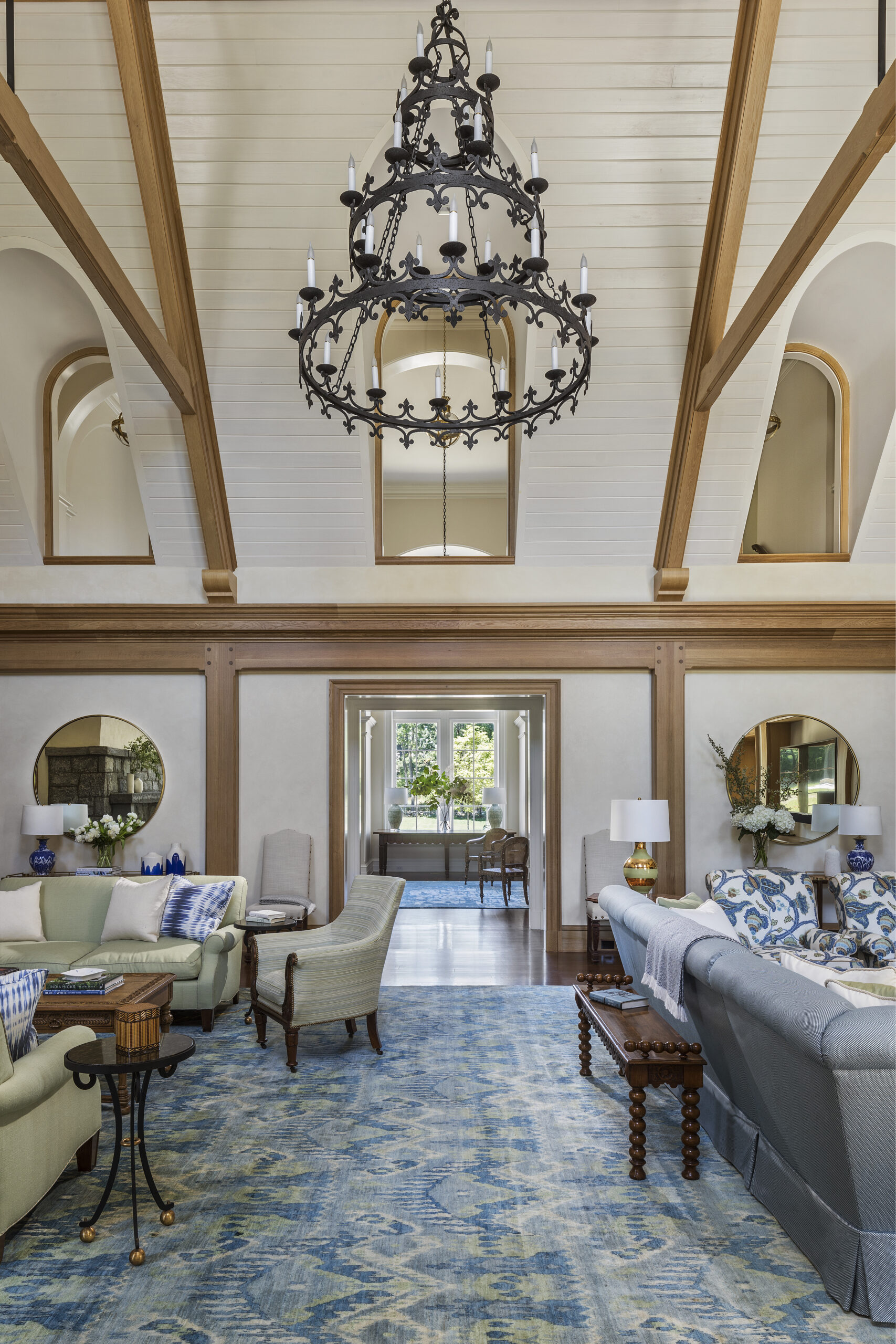 On the opposite wall, arches repeat the form of the dormers that give views down into the family room from a balcony leading to the children's room. Wadia designed this space to maximize the interconnectedness of the various family-oriented parts of the house. 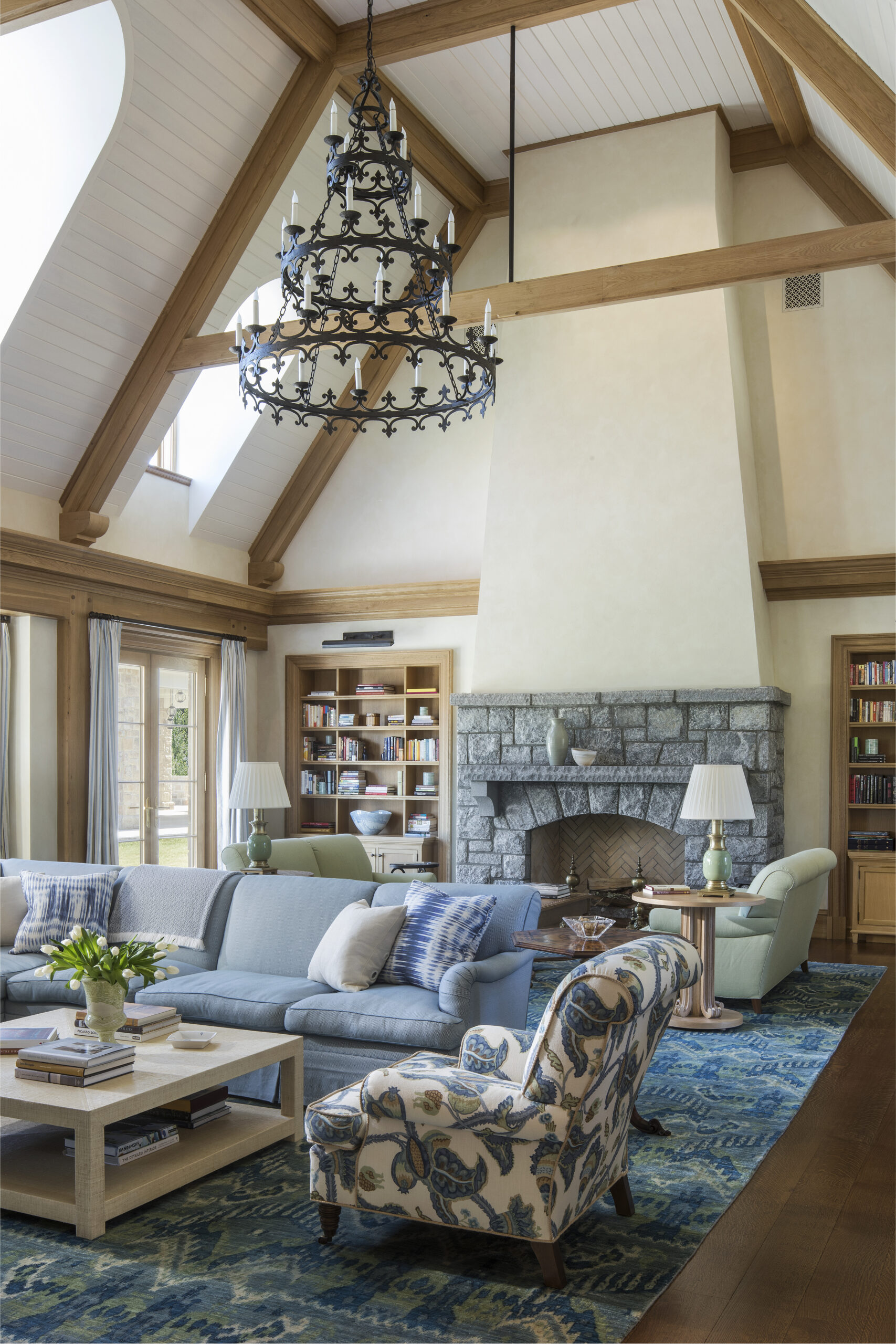 Inside, the dormers are set into the shiplap and wood-beamed ceiling. 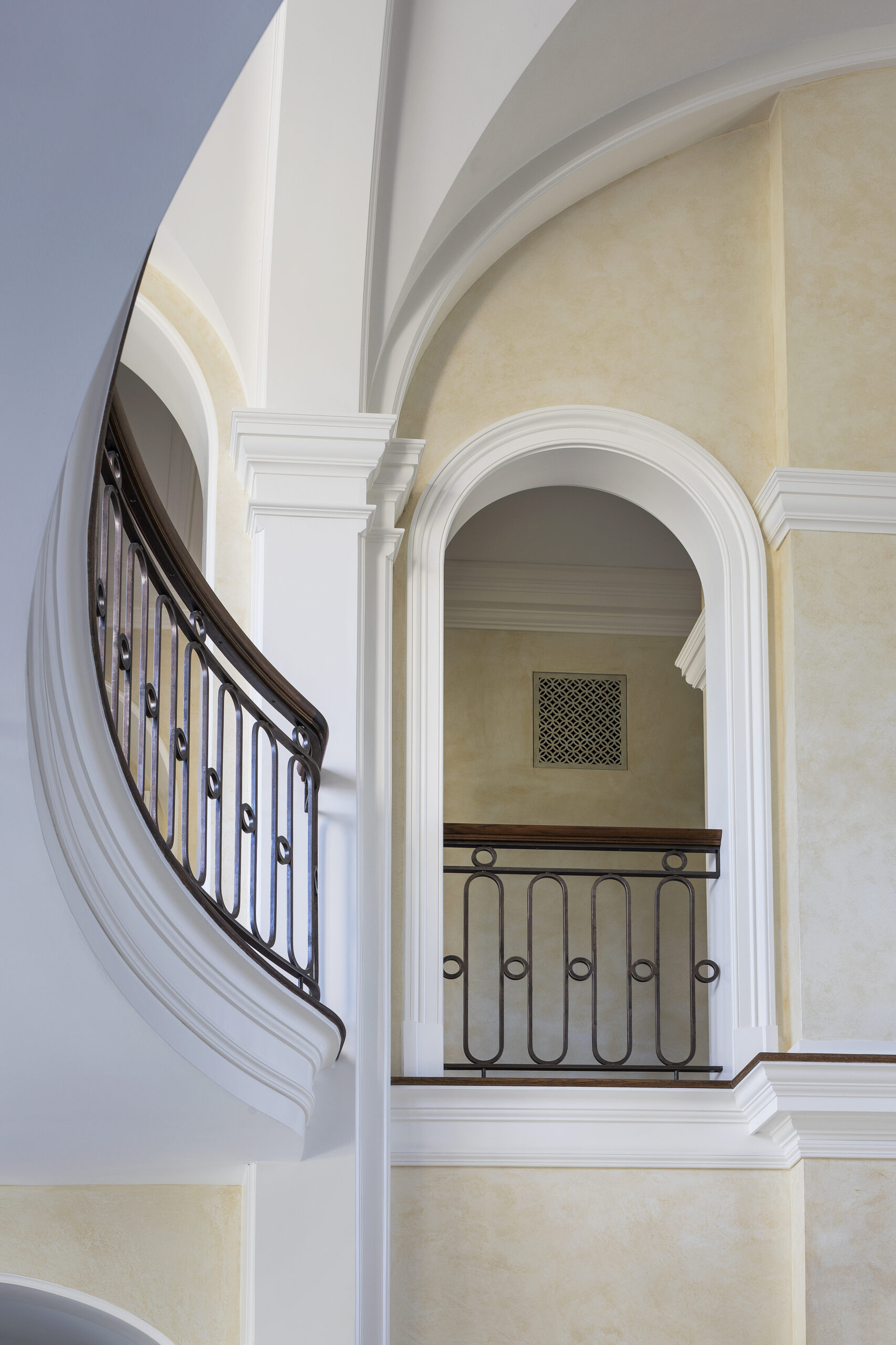 The arches and curves of the vaulted ceiling and balconies create a dynamic balance. 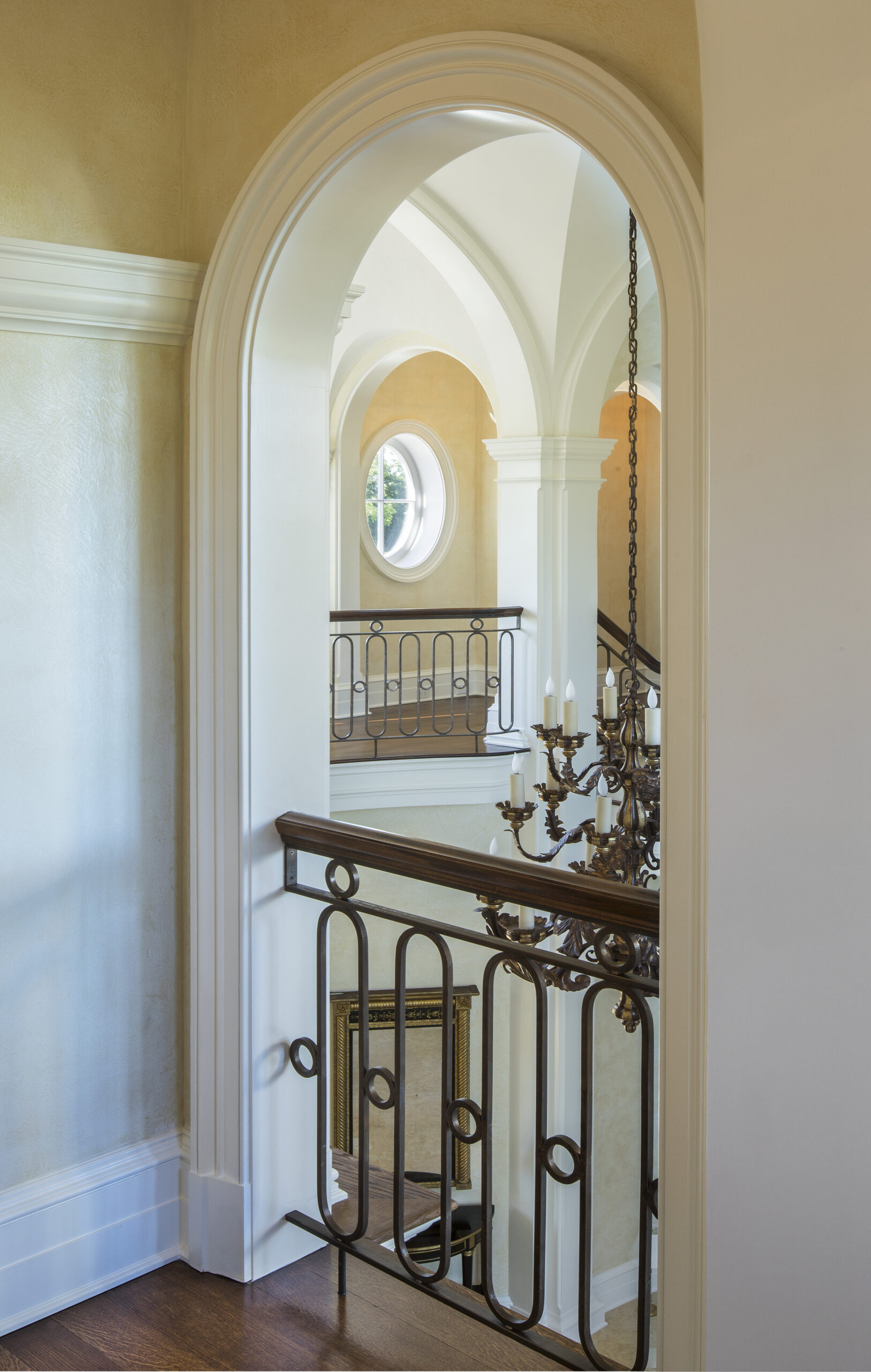 The views through the balconies create surprising moments. Here, a glimpse across the stair hall culminates in one of the oval windows on the north-facing entrance facade. 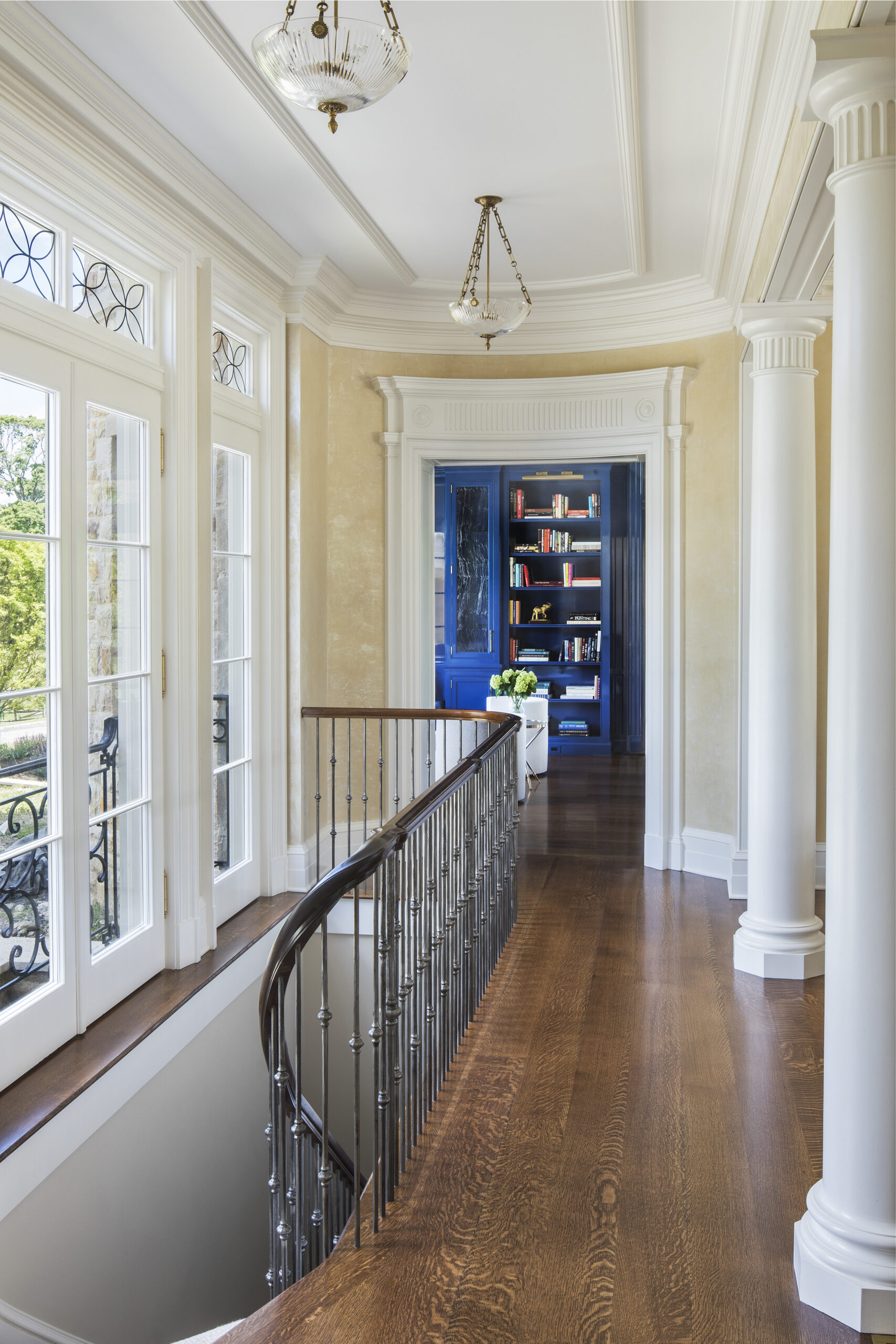 A second floor gallery crosses the stair hall and leads to the master suite.

The clients also put a lot of thought into how their children’s bedrooms should be arranged and felt that the family room should form the heart and soul of the house. To maximize the unity of the various family spaces, Wadia designed a timber-framed family room in white oak with shiplap ceilings and centered the room on a rustic stone fireplace. On one side, dormers draw in light; on the other side, arches that mirror the shape of the dormers provide views from a balcony leading to the children’s bedrooms, creating a strong feeling of interconnectedness between all the spaces. Throughout, Wadia sought to create a balance between classical themes and the openness requisite of a functional modern home.  In a quest to make each space unique, Wadia designed each room to have its own specific ceiling. A long gallery with a barrel-vaulted ceiling connects the house from end to end. Care was taken to open the dining room to this gallery, making this seldom used space a vital part of the family’s daily experience.

During the design process, Wadia created a core package of necessary design elements as well as a second package—priced separately—of embellishments, elements the clients hoped to add or Wadia thought would be important to include. During construction, Wadia scheduled decisions and helped the clients prioritize so they could judiciously add in what was most important without exceeding their budget. During this ongoing conversation, adjustments were made to the symmetry of the plan to provide an extra layer of privacy. A door was shifted off-center creating a quirky secret second entrance to the master suite—a charming addition that came about from the ongoing give-and-take between client and architect—a serendipitous gift of the design and construction process.

The pool is centered on an end pavilion, which connect to the pool house.

A dining porch extends off the kitchen.

In the square entry hall, the vaulted ceiling supported by four tall pilasters was inspired by the work of Sir John Soane. Surrounded by curved balconies off the second floor, it was designed to flood the entry with light and expansive views of the backyard through a two-story bay window.

The south-facing rear façade is anchored by the two-story bay of the entry hall and the octagonal tower containing the breakfast room.
View Portfolio