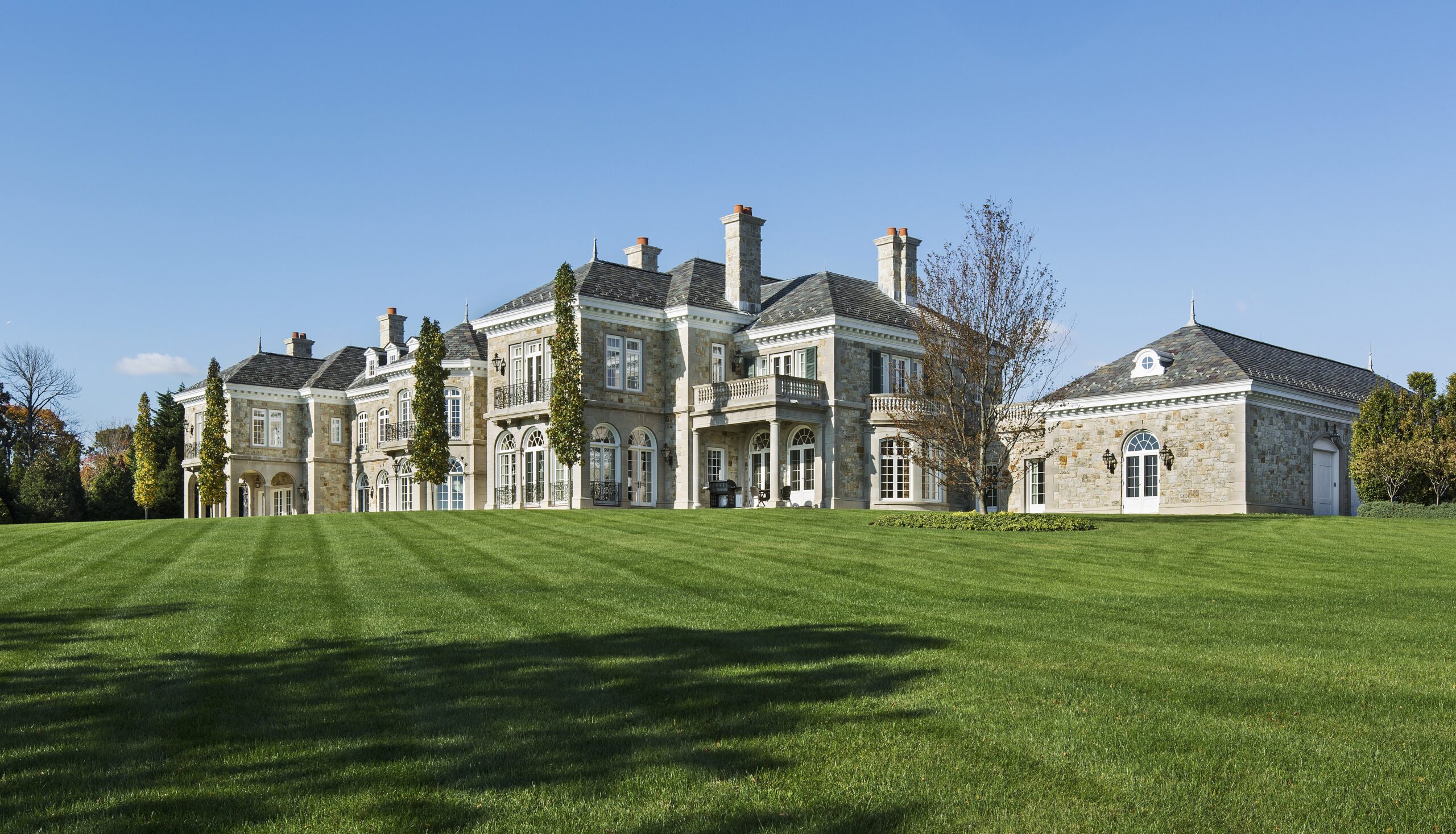 In the spirit of the golden country house era of the early twentieth century, this new shore front estate in Greenwich could very well have been designed by an American architect of that period who trained at the École des Beaux-Arts in Paris. At that time, architectural schools in this country were few and far between, and it was common for aspiring designers to study abroad. Upon their return, the lessons they learned in Paris were sought out for those wishing to display their culture and learnedness through their homes. For all intents and purposes, Beaux-Arts-trained American architects became ambassadors of taste. Like those architects working a hundred years ago, Wadia Associates also drew from a variety of historic periods of French classical architecture in the design of this house to create a modern-day equivalent of a hôtel particulier—a grand, primarily symmetrical house surrounded by a garden and approached through an entrance court. While the quoining, mansard roof, segmental arched dormer windows, chimneys, shutters, multipaned windows, and arched entryway recall the period of Henri IV in the early seventeenth century, the triangular pediment and the extensive use of segmental arched windows are reminiscent of the late seventeenth century—the age of Louis XIV. Mid-eighteenth-century landmarks such as the Place de la Carrière in Nancy also served as inspiration. As a variant, Wadia Associates used gray and gold fieldstone for the walls, which stand in contrast with the more polished limestone details of the bays, window and door surrounds, and quoins. Approached by a cobble drive framed by an allée of trees, this house would be just as much at home in park-like environs in France as it is on the banks of Long Island Sound. 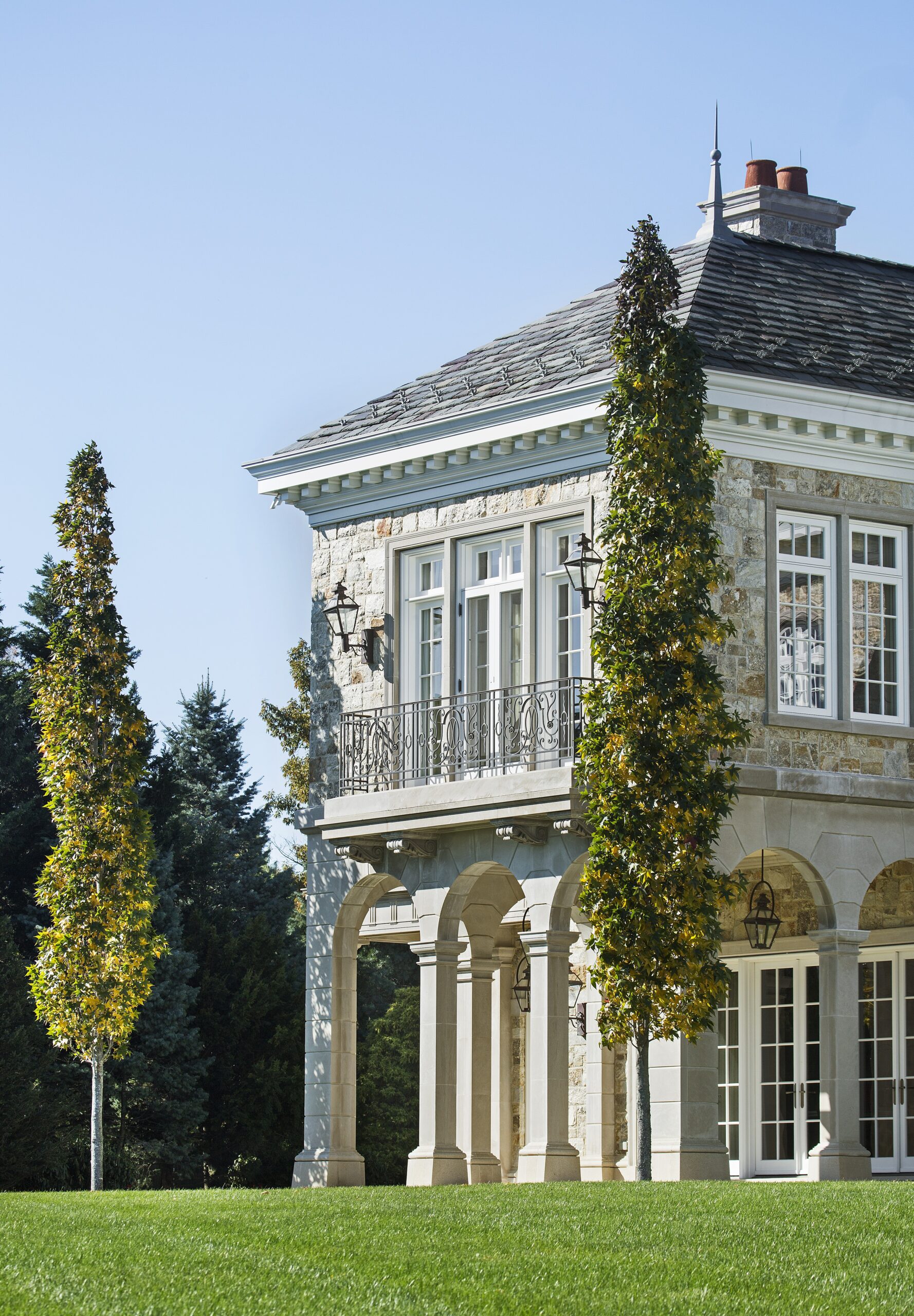 An arched limestone loggia extends of the library to the south. 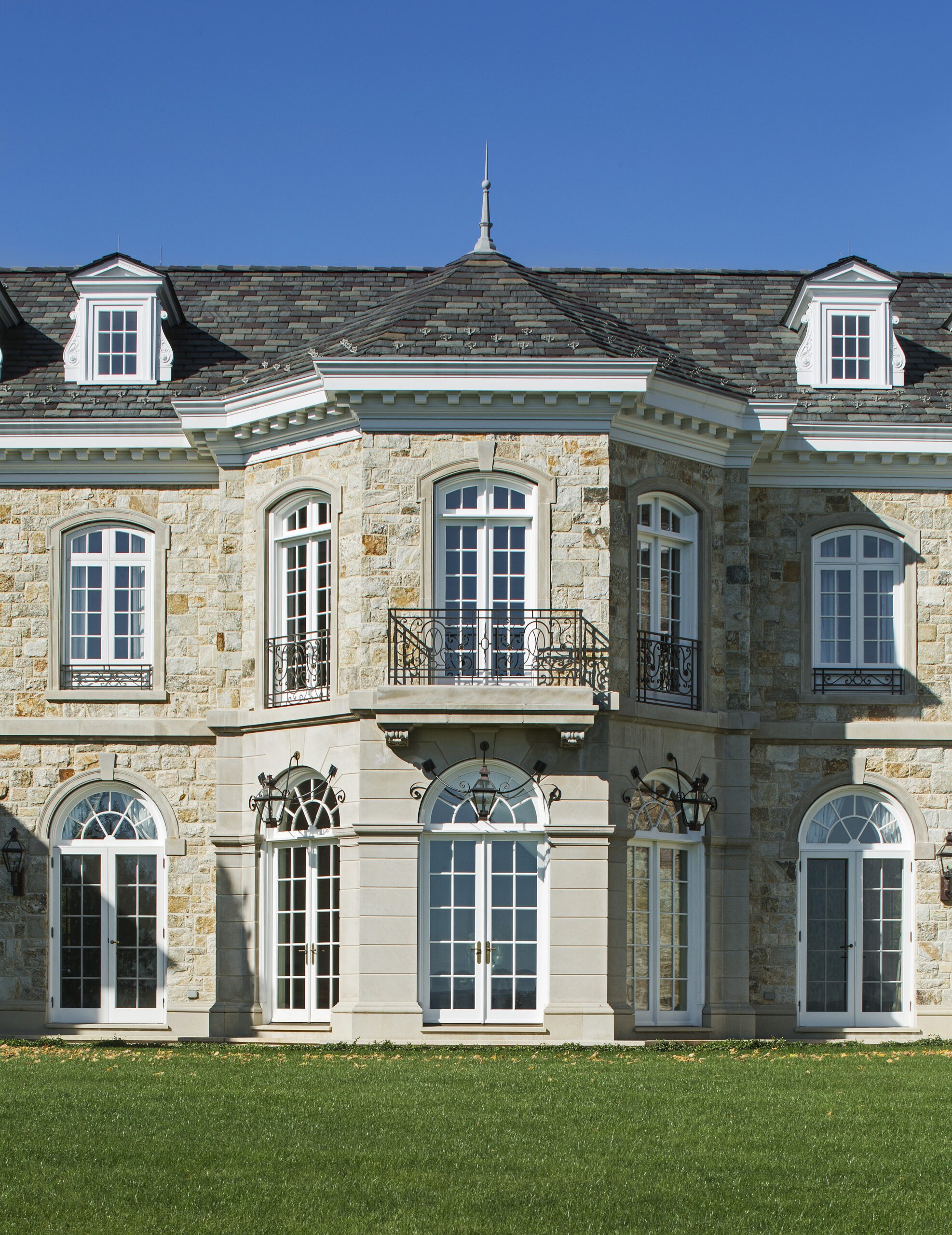 The center bay of the south facade is anchored by the volume of the rounded stair hall, articulated in rusticated limestone with band courses. 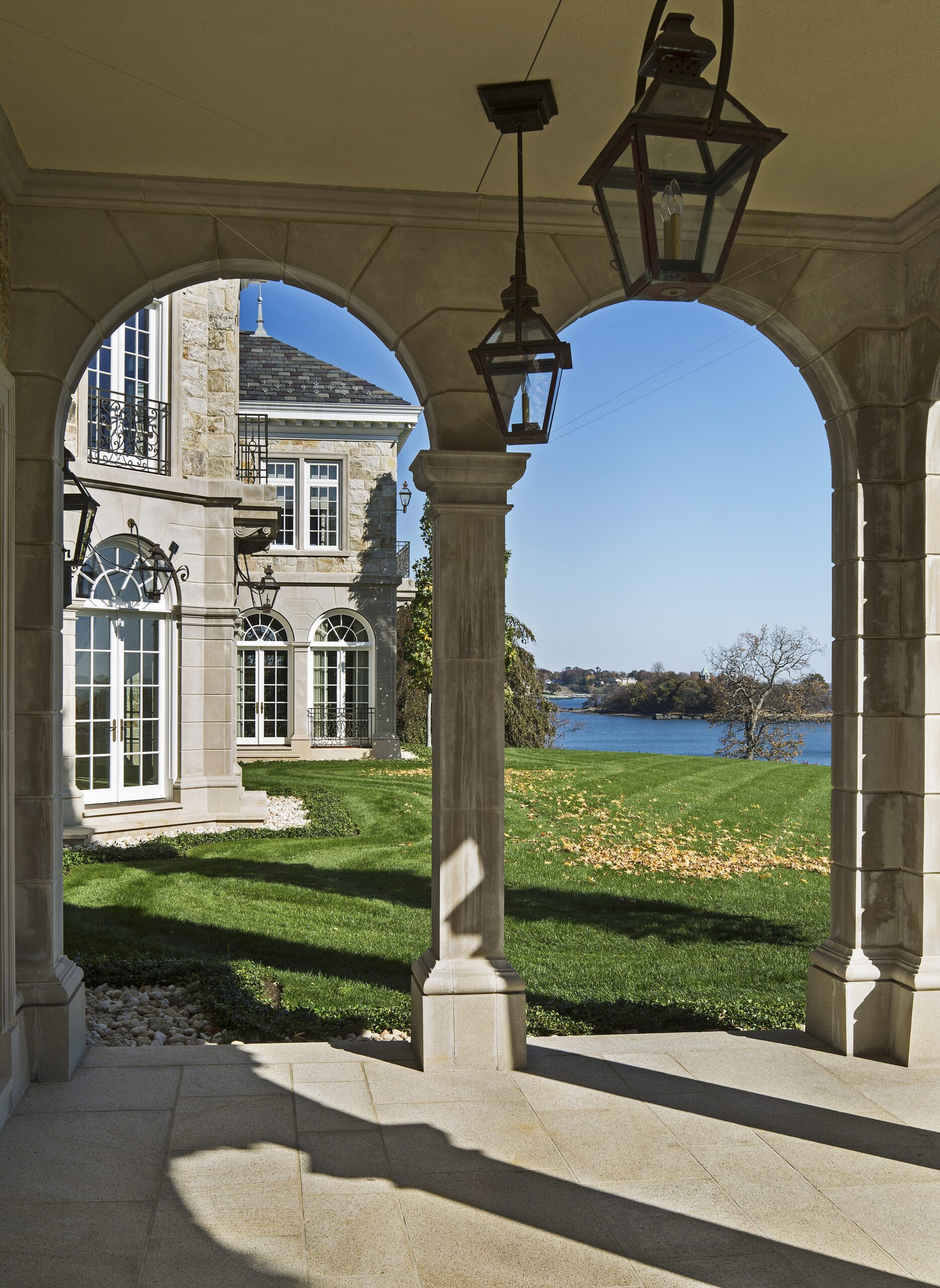 As a symmetrical house, the interiors unfold in a formal fashion, reinforced by a series of galleries and vestibules. The center entry leads into a broad rectangular entry hall, defined by a bold fluted entablature, Doric columns, and pilasters, that opens into a lofty double-height stair hall. Set in a bay, a voluptuous stair with scrolling metal balusters curves up the south wall. In plan, the house is divided into public and private sections accessed by vaulted galleries that run against the north façade; the west gallery leads to the living room, salon, library, office, and master stair, while the east gallery opens into the dining room before moving onto the kitchen, family room, office, family hall, and mudroom. As the only element that breaks the formal symmetry of the design, an arcaded garage with a drive-through to mask the garage doors encloses the entry court to the northeast.

In the early twentieth century, estate outbuildings were often carried out in a different style than the main house. Sometimes old farmhouses on-site were simply updated and incorporated; often a different architect was responsible for the outbuildings; and varying styles—from low to high—lent a sense of history to give the impression that the estate was developed over time, no tall at once. Here, this technique also gives this estate a story. The formal French design of the main house is modulated by the white-painted shingled gatehouse that Wadia Associates restored—an older farmhouse carried out with wavy and straight shingles, whimsical cutouts on the porch trim, and playful massing. As a remnant of the former estate on the property, a pre-existing stucco-and-half-timbered guesthouse was also completely renovated. Using the same stylistic language, Wadia Associates completely stripped and redesigned it to include more windows, French doors, overhanging eaves, and dormers, giving it a new lease. An intriguing mix of old and new, this expansive estate overlooking the Sound easily reflects and continues the storied era of country house building that transformed Greenwich and many other areas a hundred years ago.

On the south facade, the disciplined cut limestone details on the bays, window and door surrounds, and quoins play against the gray and gold fieldstone walls. A deep cornice with carved wood modillion blocks supports a thick slate roof in a blend of grays and blacks.

In contrast to the formal main house, the preexisting gate house, which Wadia renovated, delights in playful architectural details and massing.

New windows and French doors increase the amount of natural light in the redesigned guesthouse.