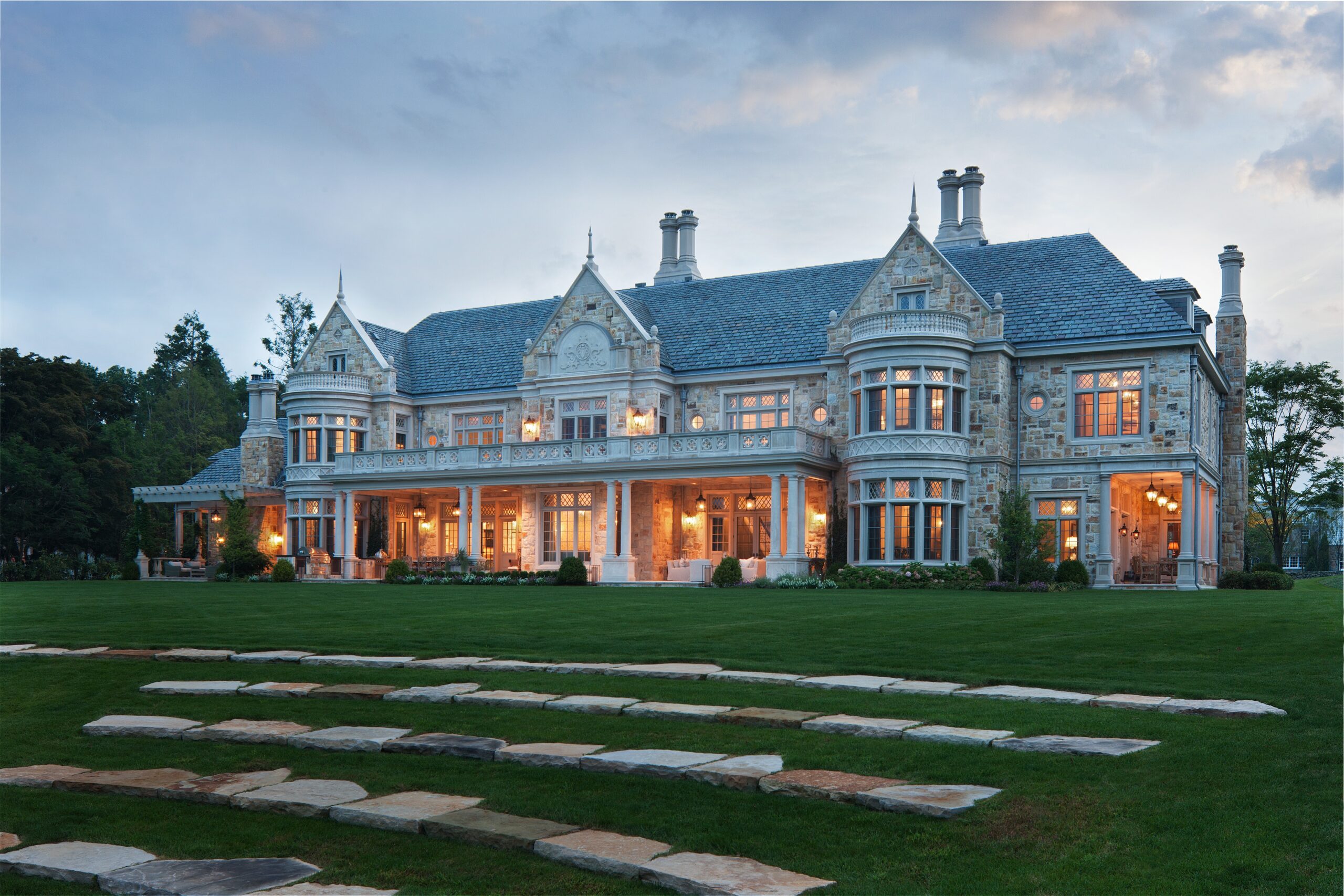 Named after King James I, the Jacobean architecture of seventeenth century England incorporated elements of Renaissance design with a freer and more fanciful touch than the Elizabethan style that preceded it, making liberal use of columns, pilasters, arches, and open parapets detailed with carved stone. Inspired by British landmarks such asCrewe Hall in Cheshire and Bank Hall in Lancashire, this new Jacobean house in Greenwich, Connecticut, borrows aesthetic ideas from the historic models and wraps them around a thoroughly updated plan for a modern family.

The rear yard gently rolls down to a sunken tennis court surrounded by planting beds.

At the head of the sunken tennis court sits a pool and open pavilion; its detailing echoes the rear terrace of the house.

The colors of the gold, brown, and cream fieldstone are complimented by the Indiana limestone while the curved front bays counteract the planar effect of the front gables.

This particular client had seen a conceptual design for a Jacobean manor in Wadia’s office that had never been built and, while they loved the elevations, they were not convinced by the corresponding floor plans.Rather, they were taken by a plan for a Georgian country estate that Wadia had designed years prior and asked if the various elements from the two very different designs could somehow be married cohesively. The result is a house that merges and subtly modifies the more formal Georgian floor plan and incorporates exterior forms and details evocative of the Jacobean style.

Like its precedents, it was important for the front and rear elevations to be predominately symmetrical, but the program modifications the client desired added an extra challenge. It wasn’t simply a matter of super imposing new façades on a pre-existing plan. Since the client wanted a much larger kitchen and breakfast room, Wadia had to find a way to incorporate more square footage into the plan without losing the basic symmetry of the rear elevation. To achieve this, Wadia pushed the dining room outward, making it the central axis point of the east elevation, and added symmetrical curved bays off the living and breakfast rooms to frame the covered porch in between. As a result, the main axis of the house subtly shifts from front to rear:the west-facing front elevation is centered on the entrance to the house while the rear is anchored by the dining room bay. 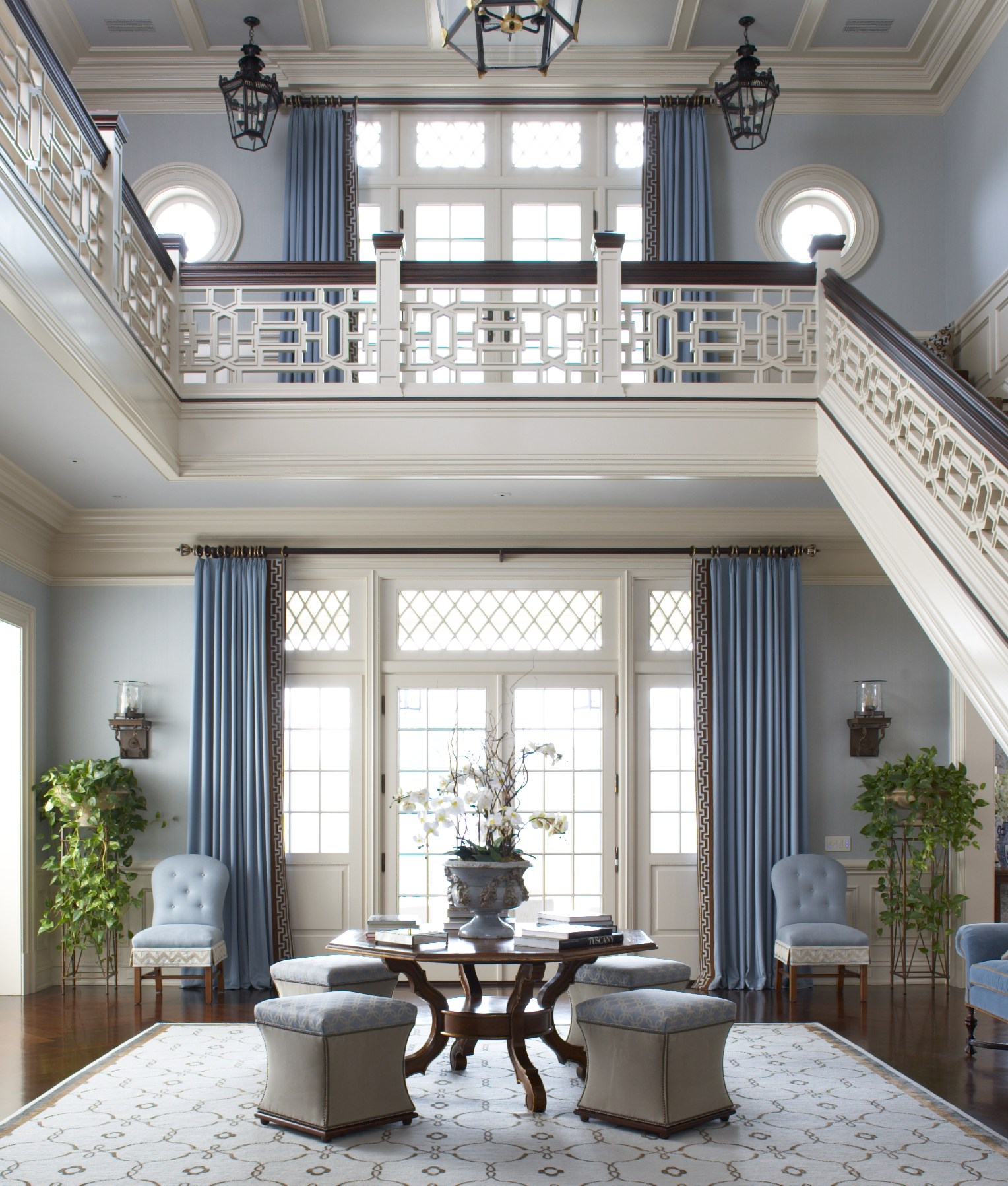 A dramatic first impression is created by the double-height entry hall with a stylized painted wood railing. 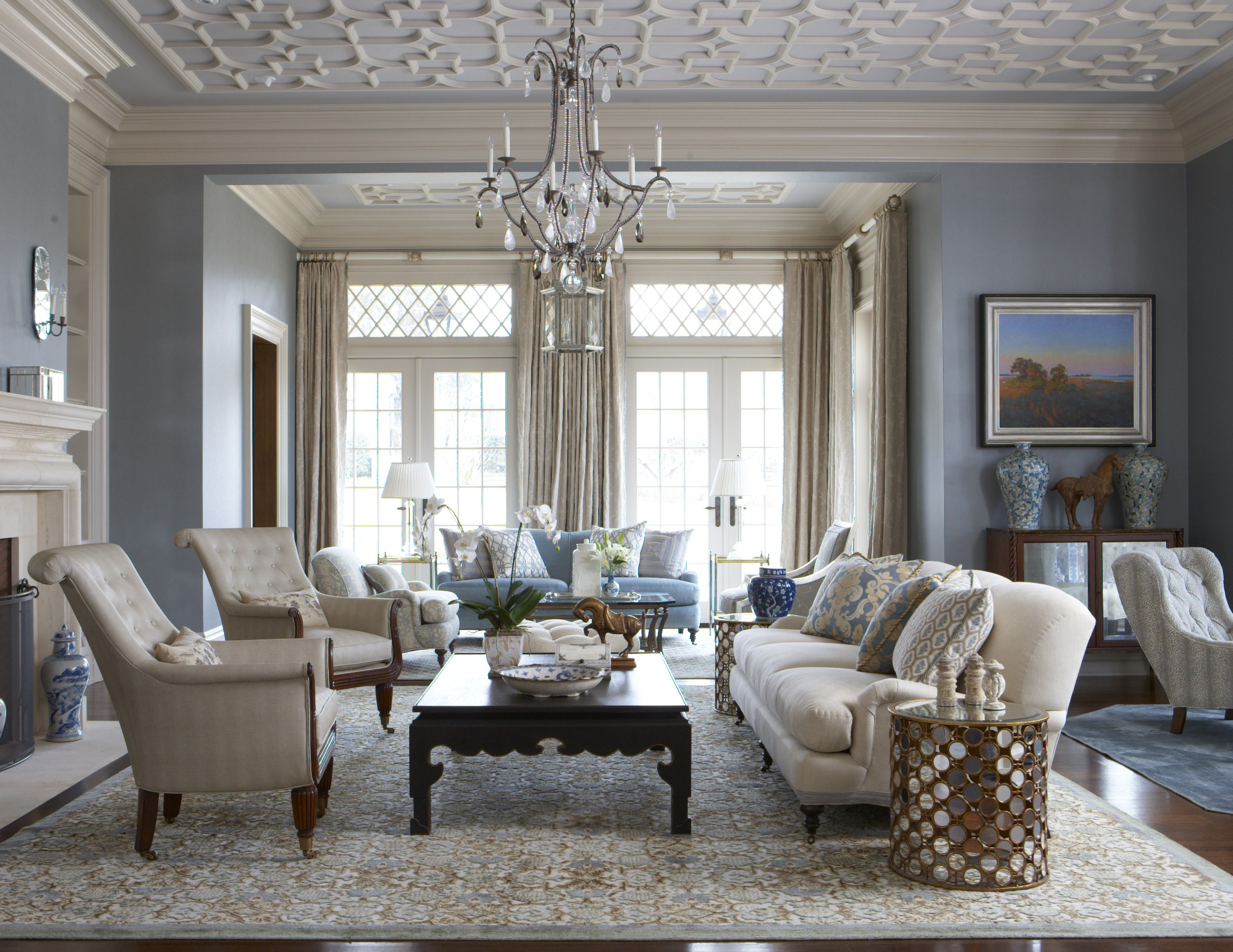 The large sun-lit living room has an elaborate plaster ceiling and floor-to-ceiling windows on two exposures. 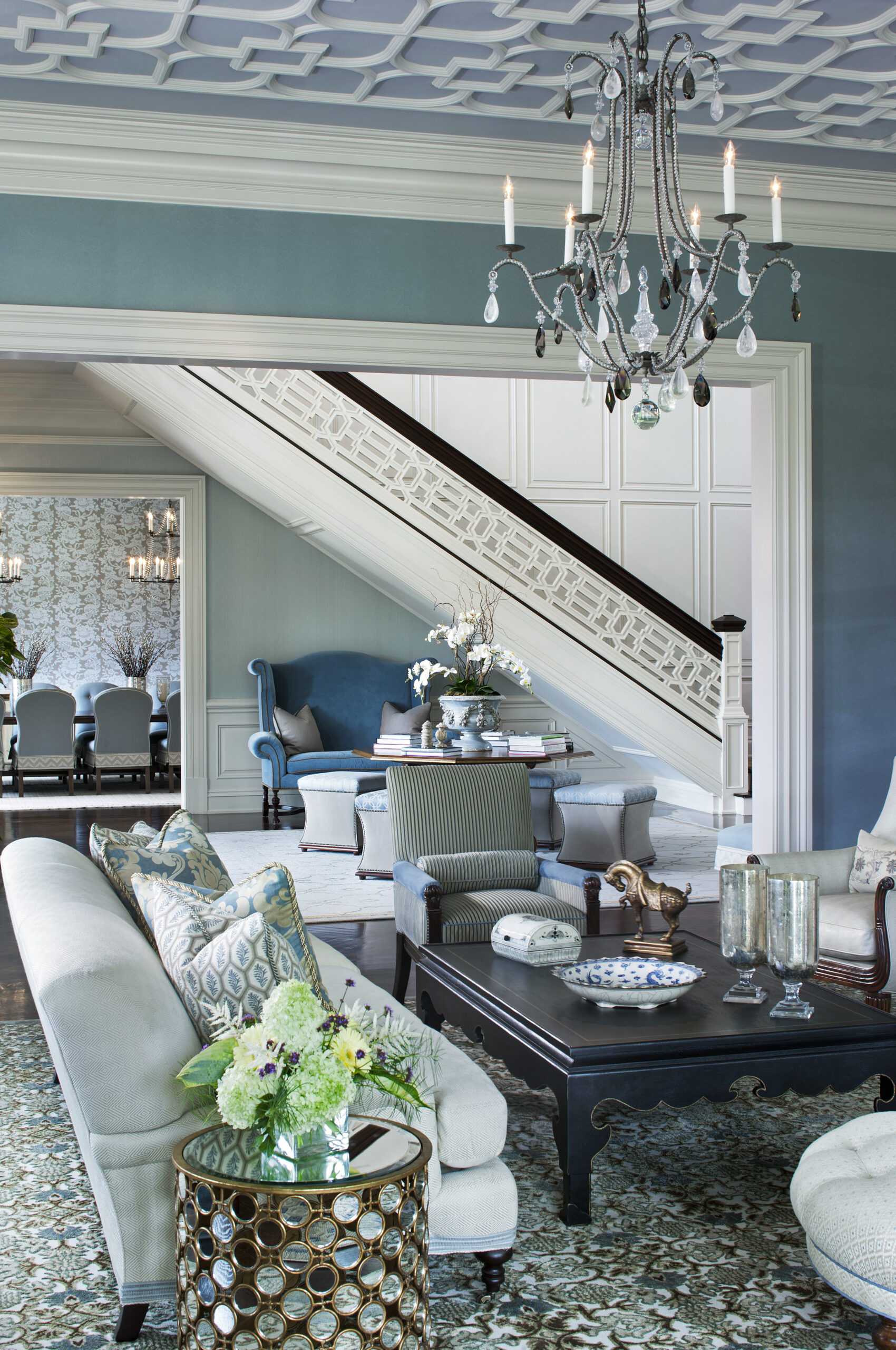 The living room, stair hall, and dining room are arranged enfilade, allowing for views from one space to the next. 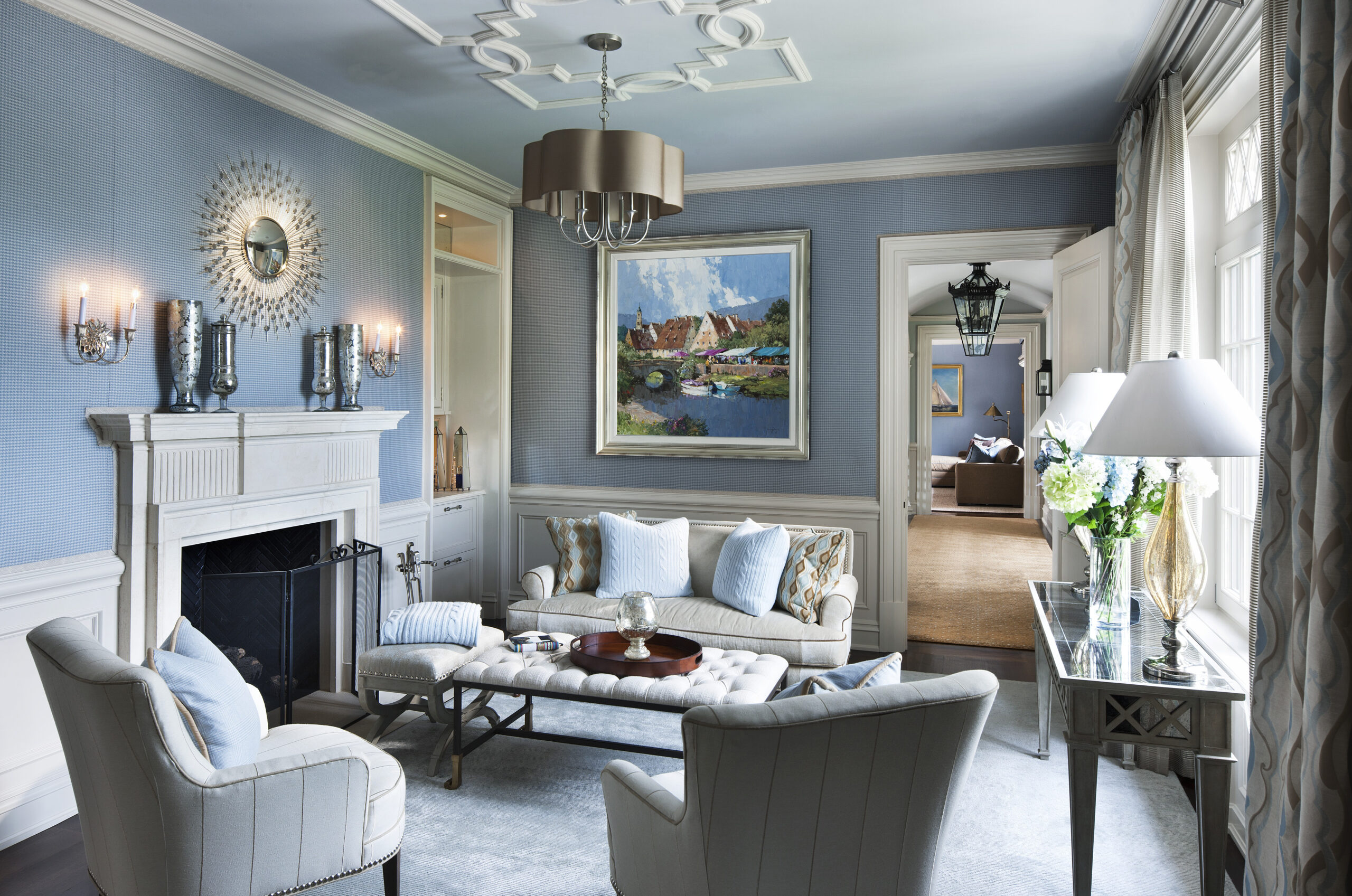 The focal point of the master bedroom vestibule is the finely carved mantel.

The solidity of the house is underlined by the extensive use of stone—as cladding, as detail, and as the thick graduated slate on the roof. On the exterior, the gold-and-cream-colored granite veneer and carved limestone are enhanced by the large punched openings of glass, articulated with a more typical muntin pattern on the lower window panels and more playful diamond panes above. As the thread tying the various elements of the façades together, a deeply carved limestone band course encircles the entire house, at some points weaving into the entablature of a side porch or the trim of the curved front bays and, at other moments, bowing outwards as the cornice of the rear covered porch. 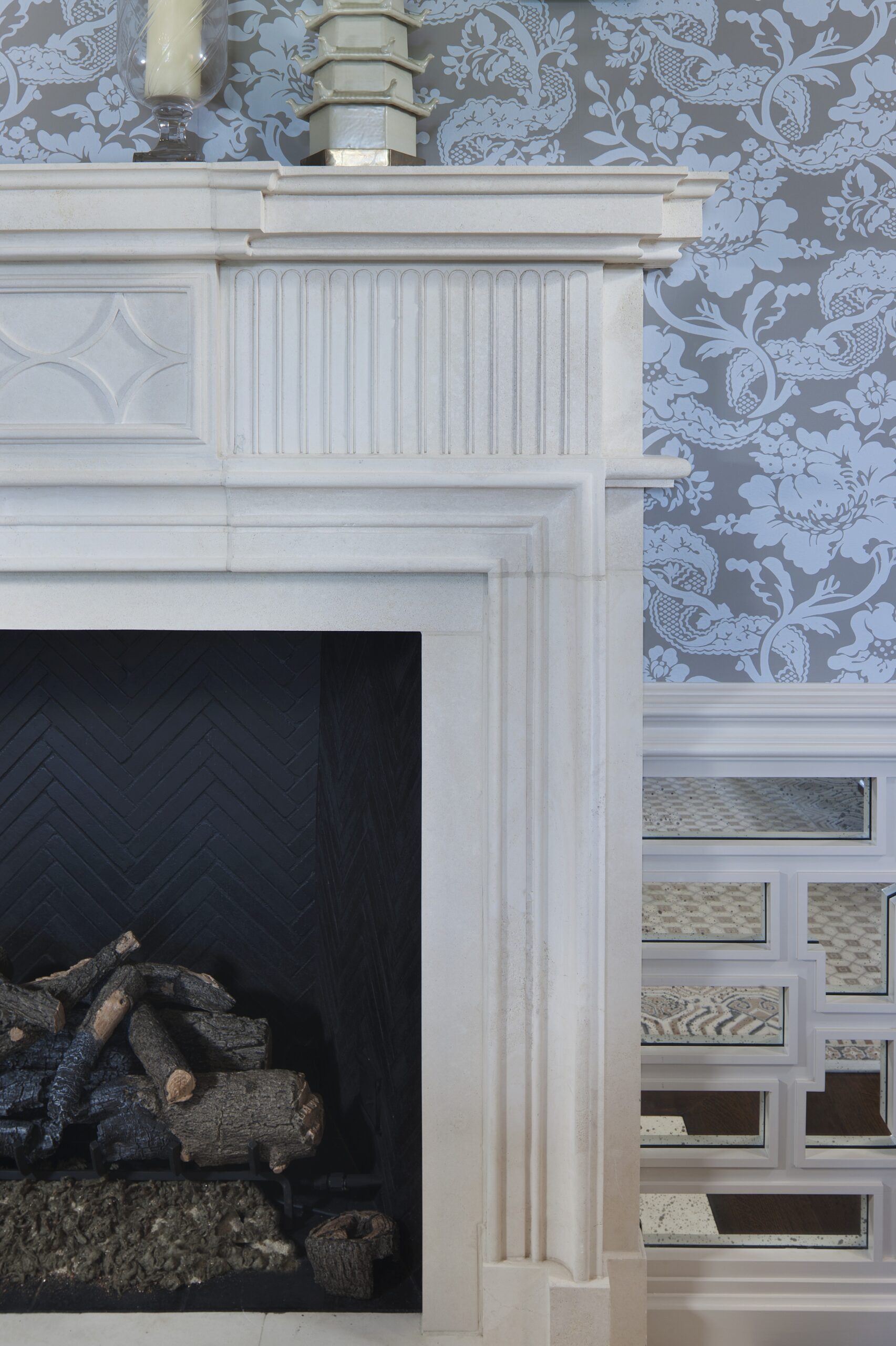 The carved stone mantel in the dining room is more Georgian in spirit. 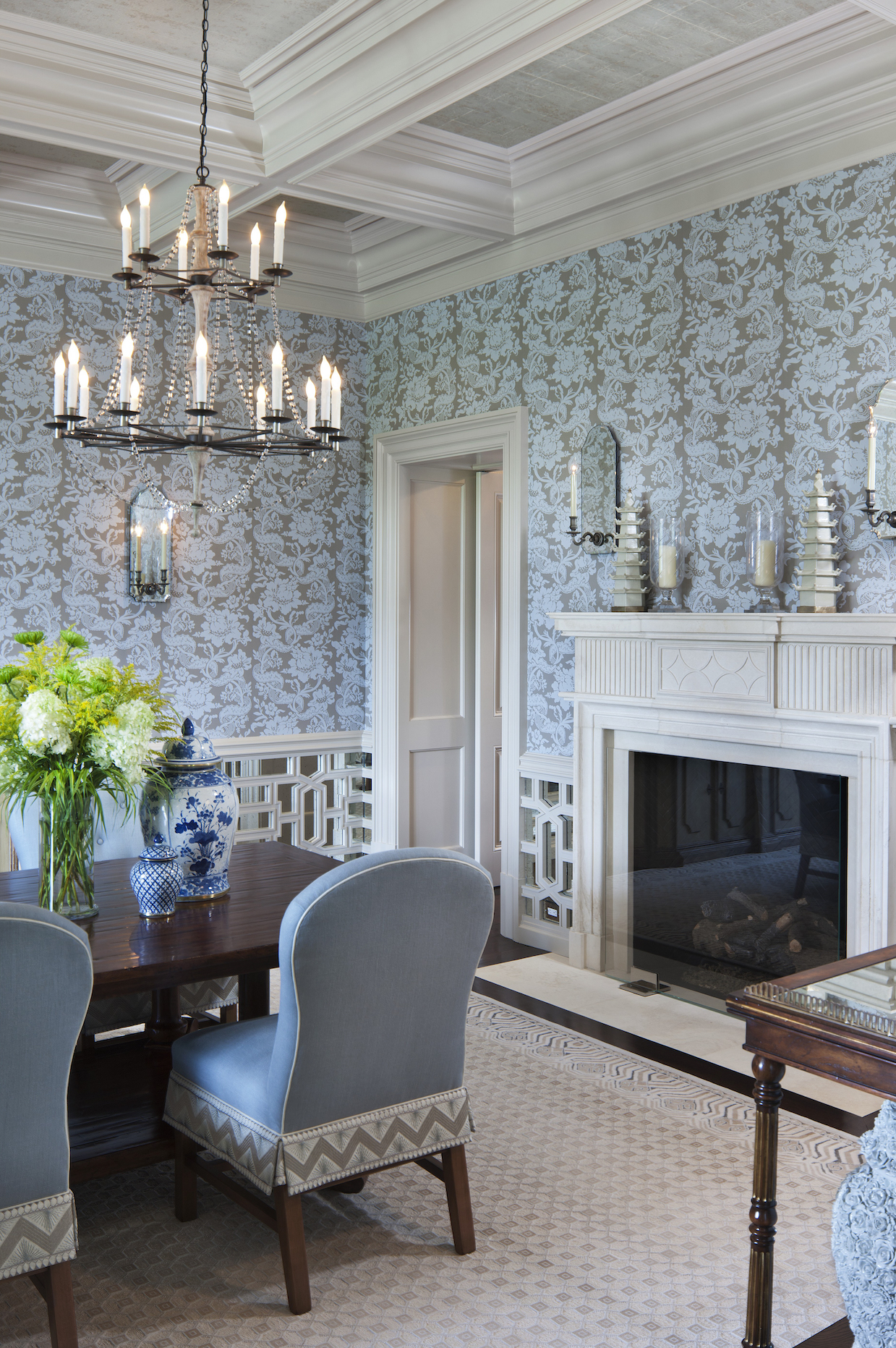 The mirrored backing of the dining room wainscoting, which echoes the design of the main stair, adds visual depth. 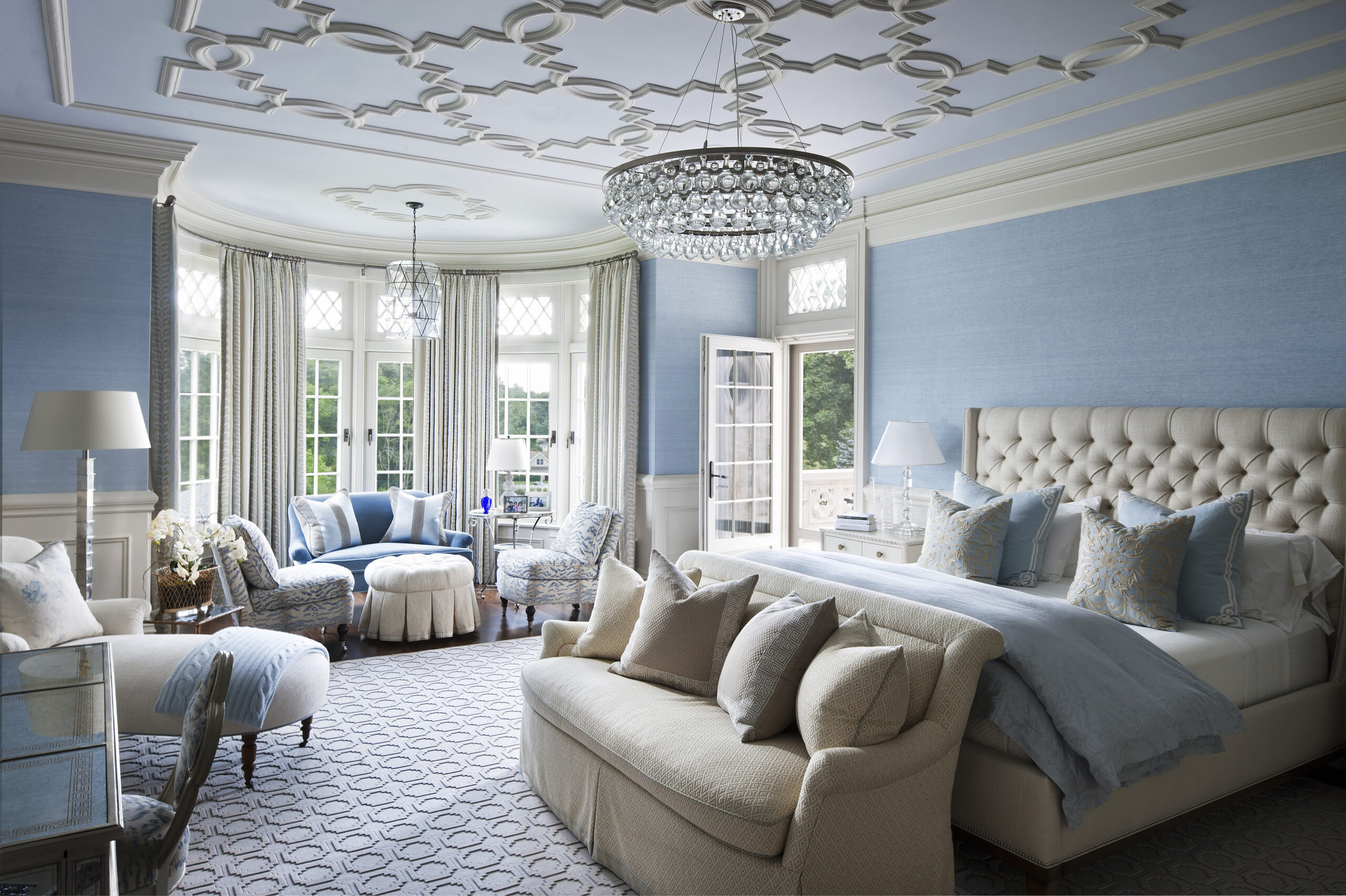 The master bedroom has a curved seating bay and a door leading out to the balcony. 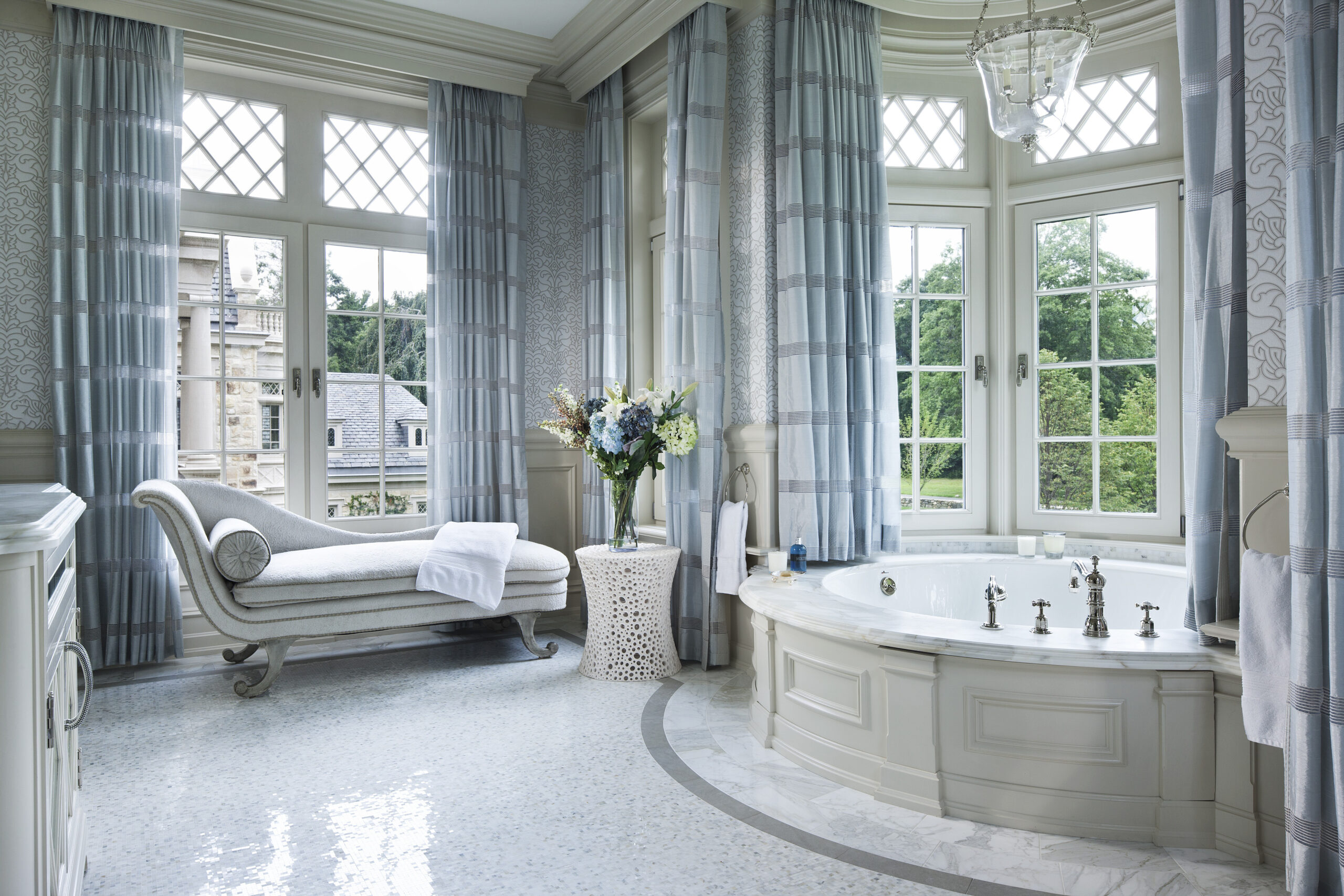 The soaking tub fits neatly into the curve of the window bay.

On the first floor, twelve-foot ceilings create ample height for the tall windows, French doors, and deep crown moldings. West-facing windows flood the primary hallway running the width of the house with light. The intersecting entry vestibule opens into a double-height hall with a towering ceiling and a wraparound stair accented by a Chinois-style painted wood balustrade. Large framed openings allow this space to spill into the living and dining rooms where French doors access deep covered porches on both the rear and sides of the house. Carried out in shades of blue and cream, a richly stained paneling, the sun-filled rooms are decorated with comfortable furnishings. Instead of the heavily carved and ornate elements of Jacobean architecture, the interior details are lighter and more stylized, in keeping with the lifestyle of its modern-day occupants. 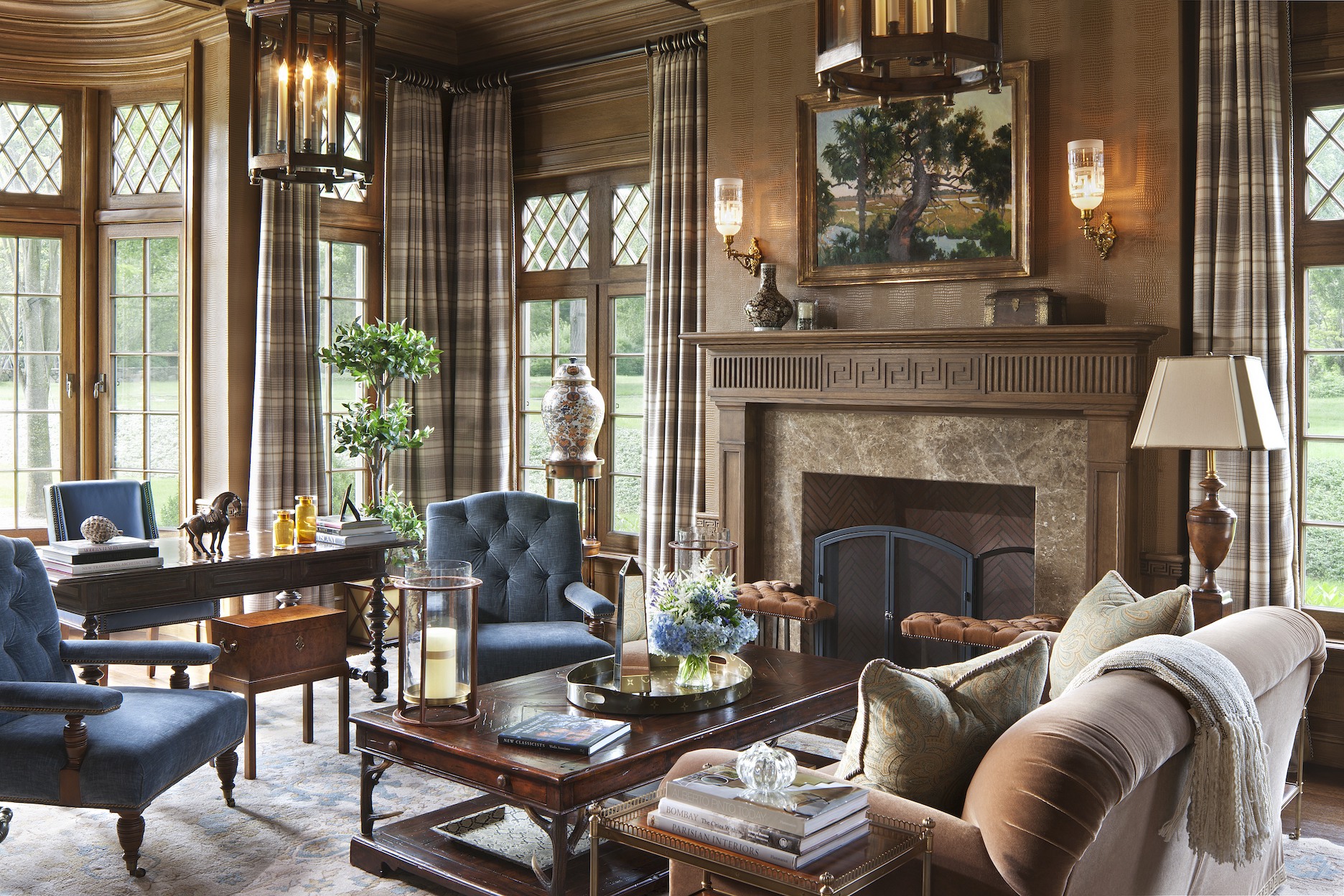 The warm and inviting library, which doubles as the husband’s office, is paneled in richly stained white oak. 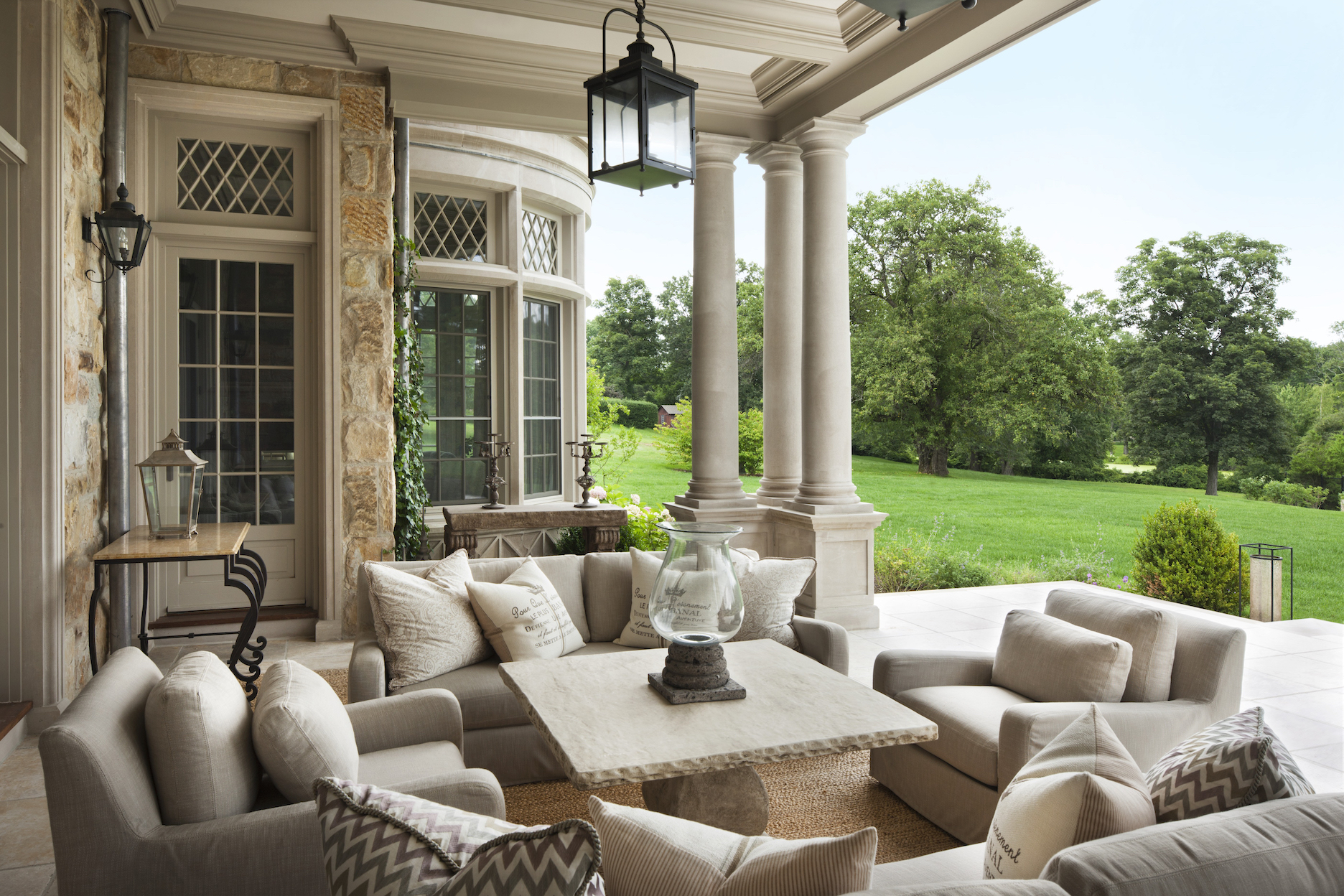 To the east, a covered stone terrace extends off of the entry hall and kitchen. Above, the bedrooms enjoy balconies and direct access to the outdoors 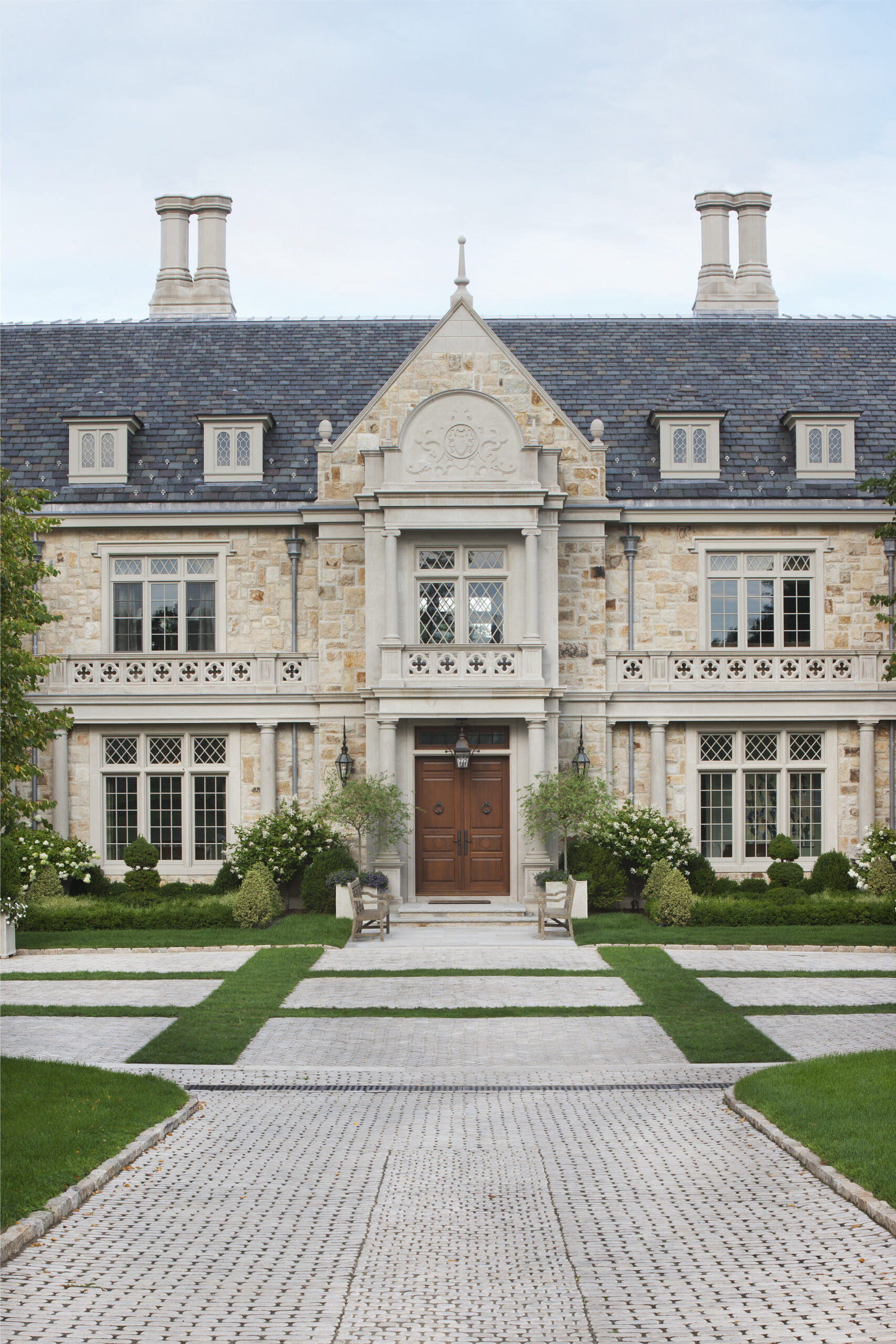 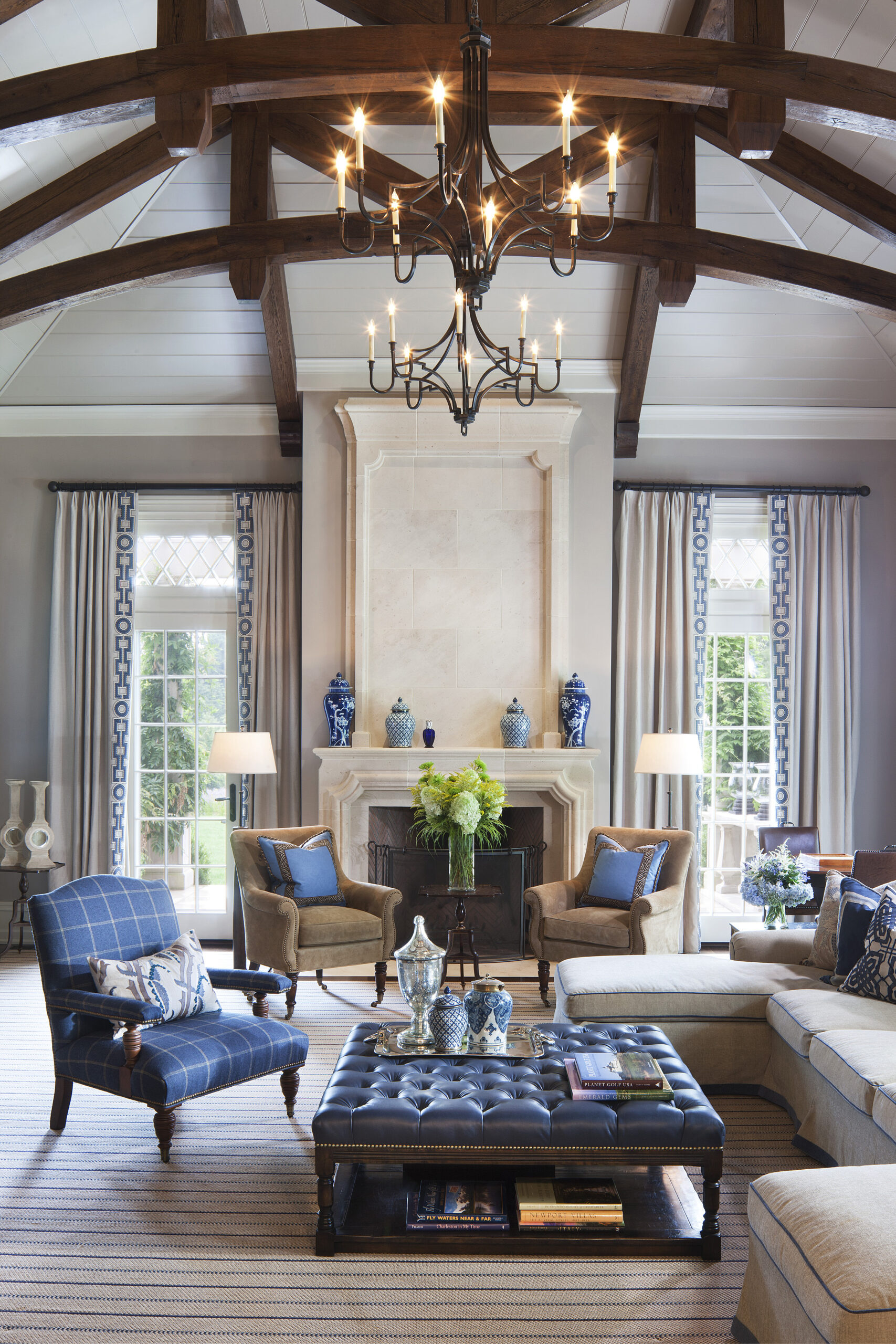 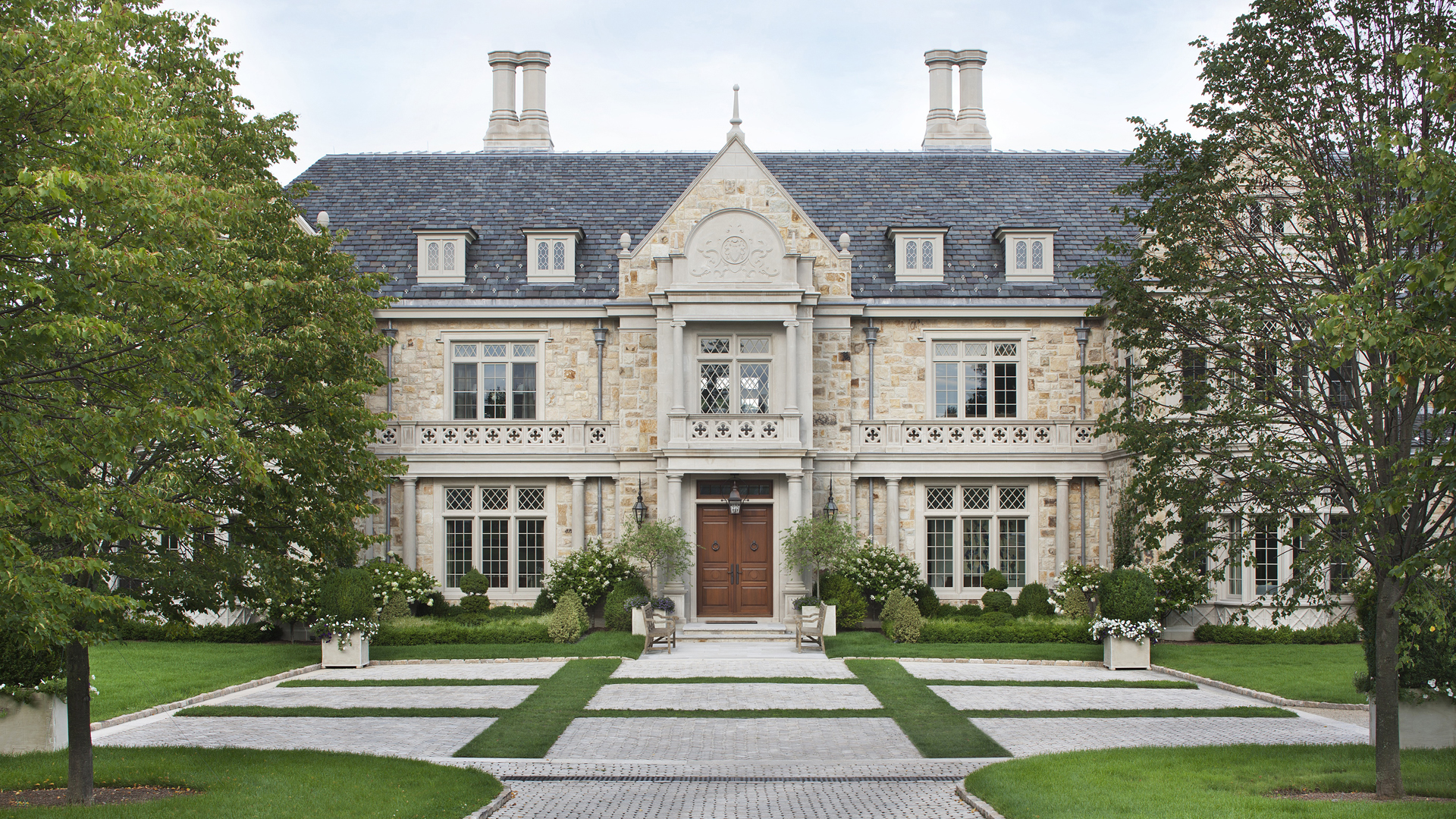 The formal symmetry of the house is established by the layout of the parking court, the front door, center gable and chimneys.