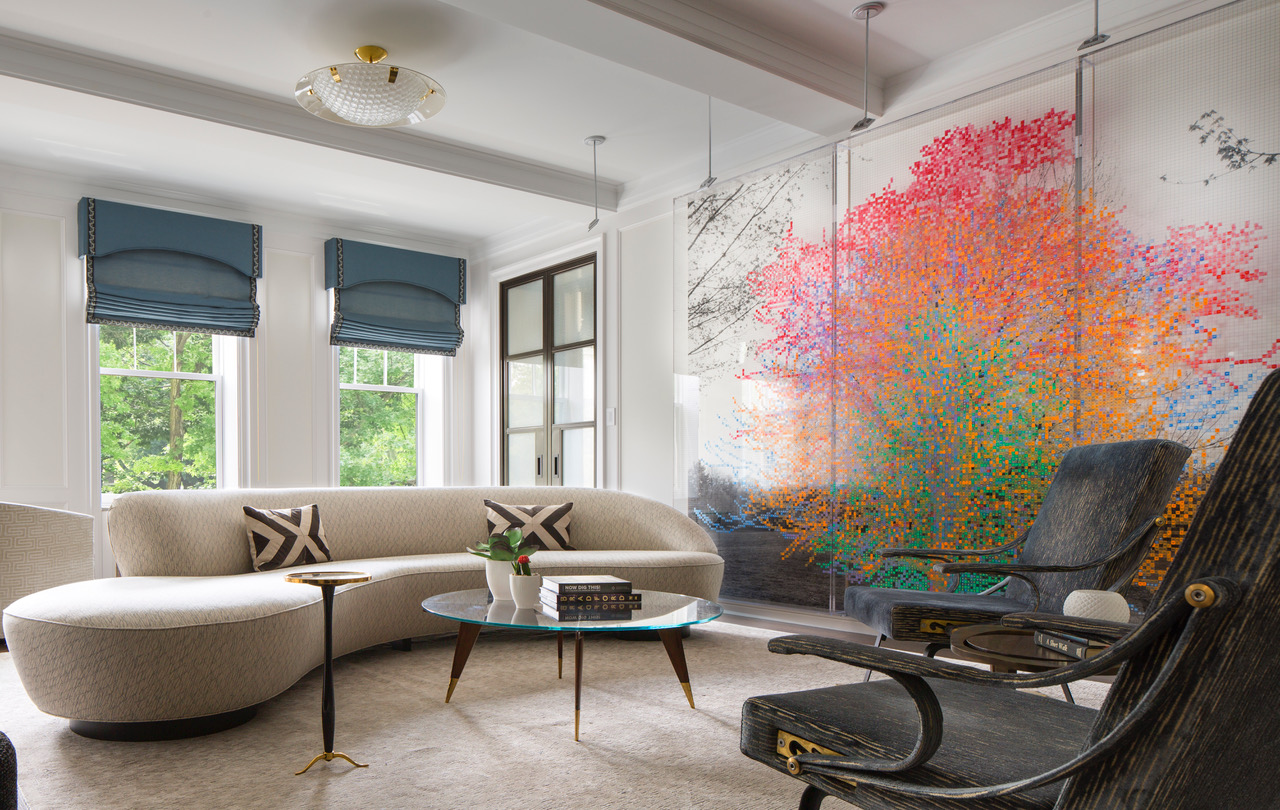 As a pied-à-terre, this two-bedroom apartment on Central Park West is intended as a home base in New York City for a couple that had relocated to Florida and desired a place to stay when visiting their grown children or attending business and charitable board events. While it commanded lovely eye-level views of Central Park, the pre-war apartment had never been touched and was in need of a complete renovation. This included unglamorous aspects such as integrating air conditioning and updating the electricals, as well as replacing the windows which had rotted beyond repair. But, as an upside of modernizing the bones of the apartment, it left Wadia Associates with a clean slate on which to add its creativity.

The marble mantel in the living room is threaded with shades of gray and lavender.

The sitting and living rooms are connected by metal Harmon hinge doors. 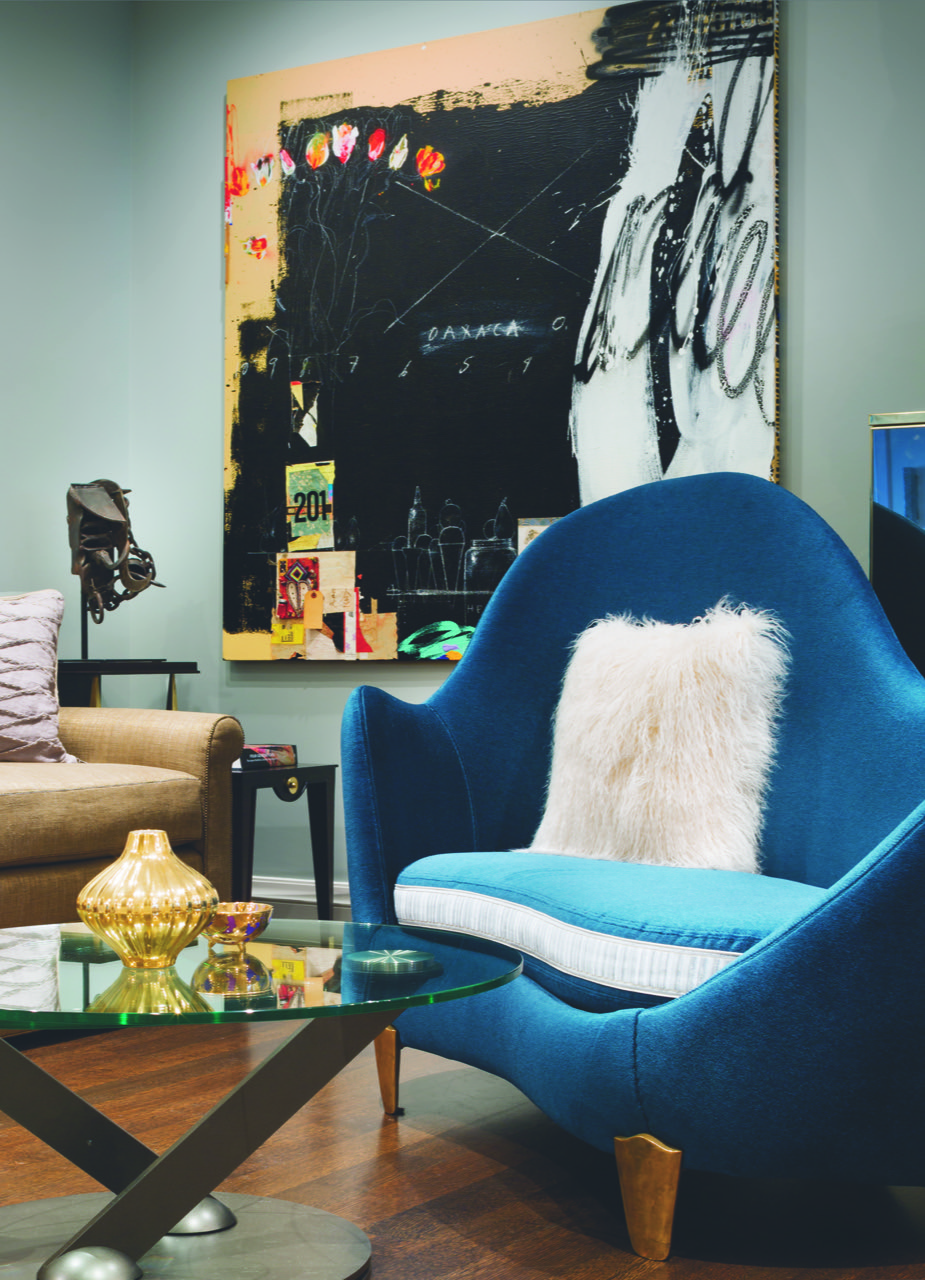 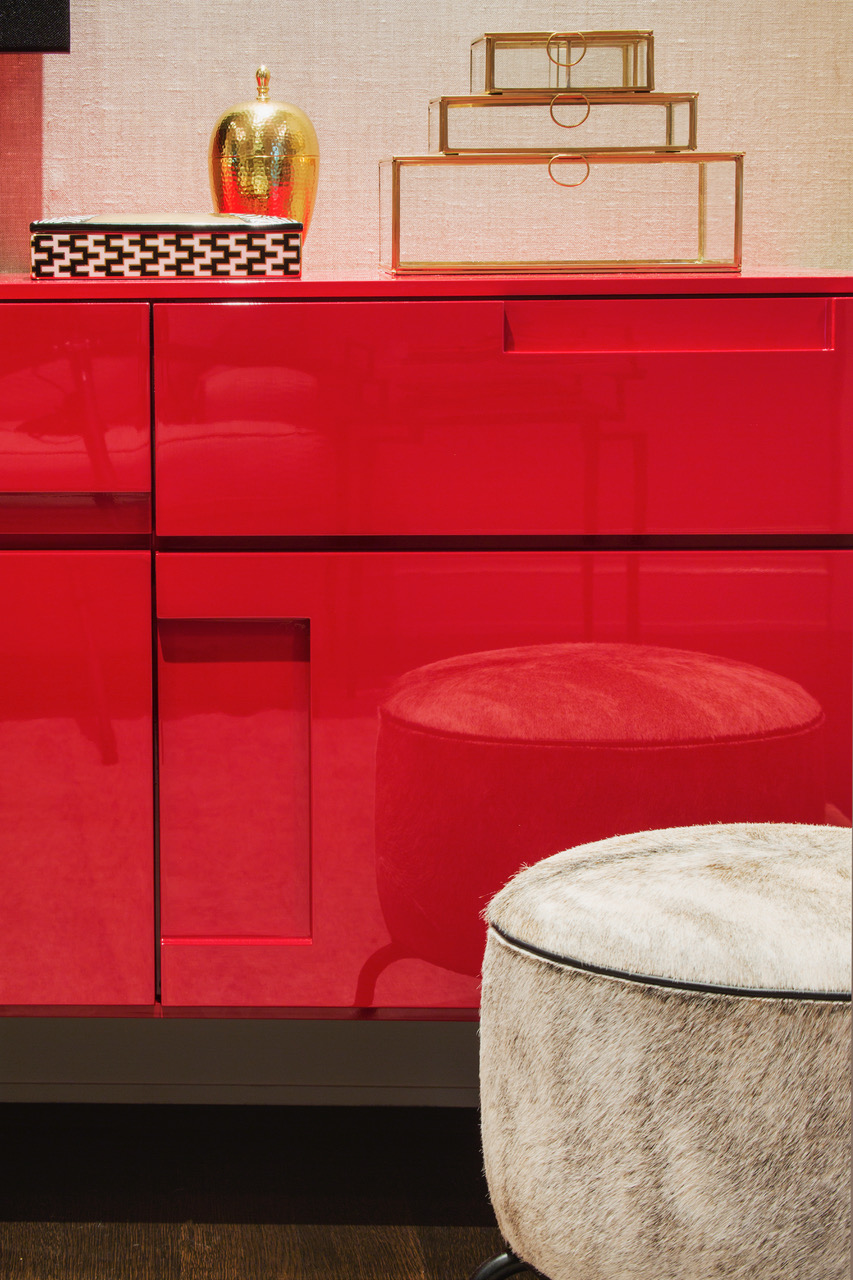 A bright red-lacquered custom cabinet is the focal point of the sitting room. 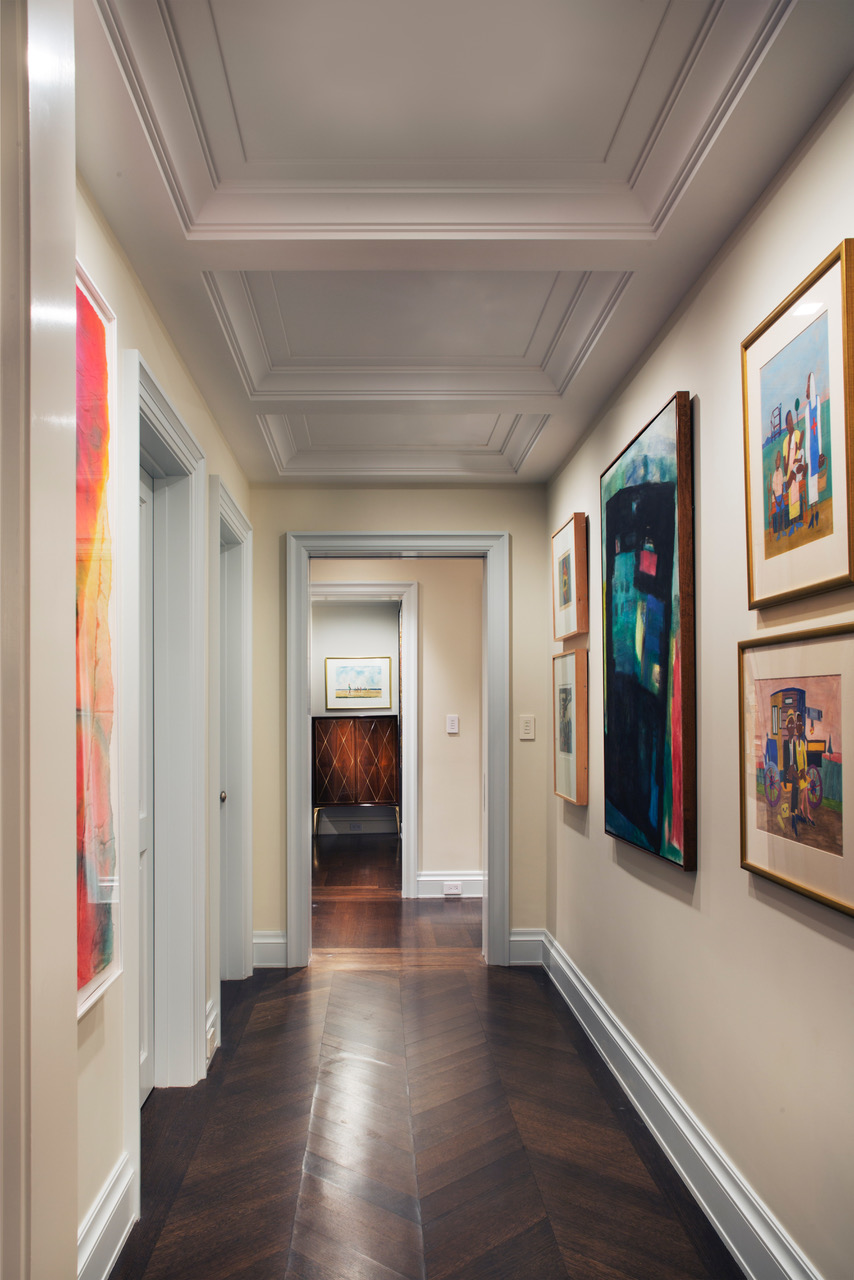 The hallway to the bedrooms was widened to hang and view art. 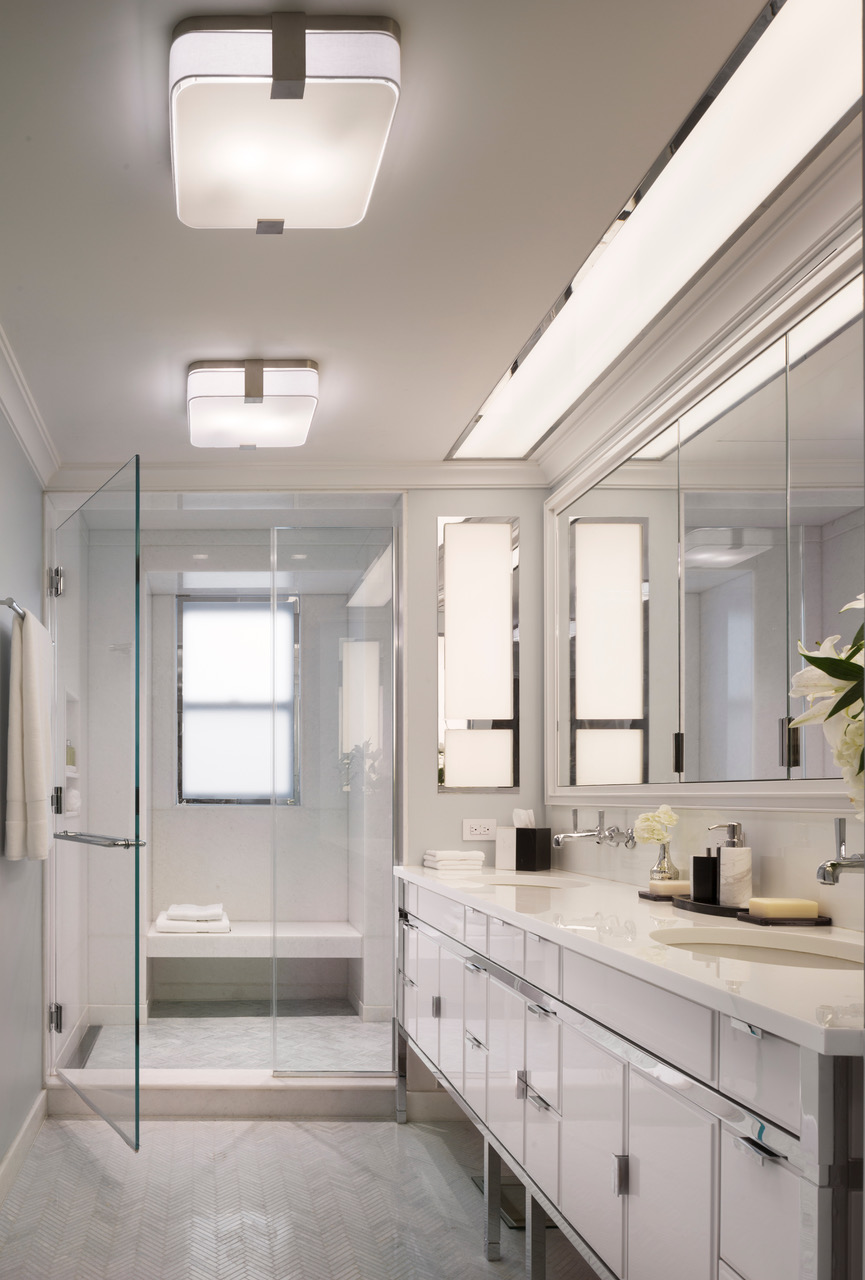 In the master bath, custom-crafted flush lights around the vanity provide perfect lighting. 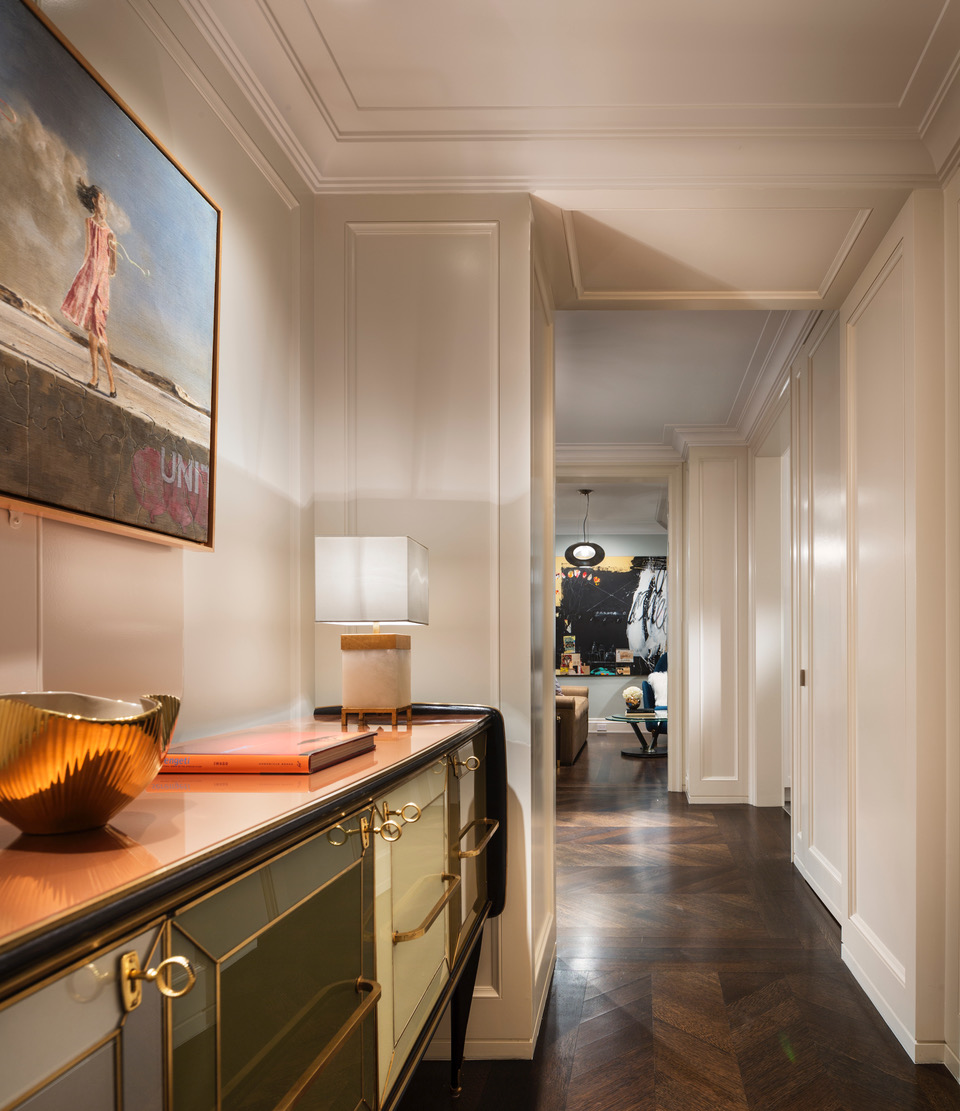 An antique sideboard is nestled into a niche in the entry vestibule hallway. 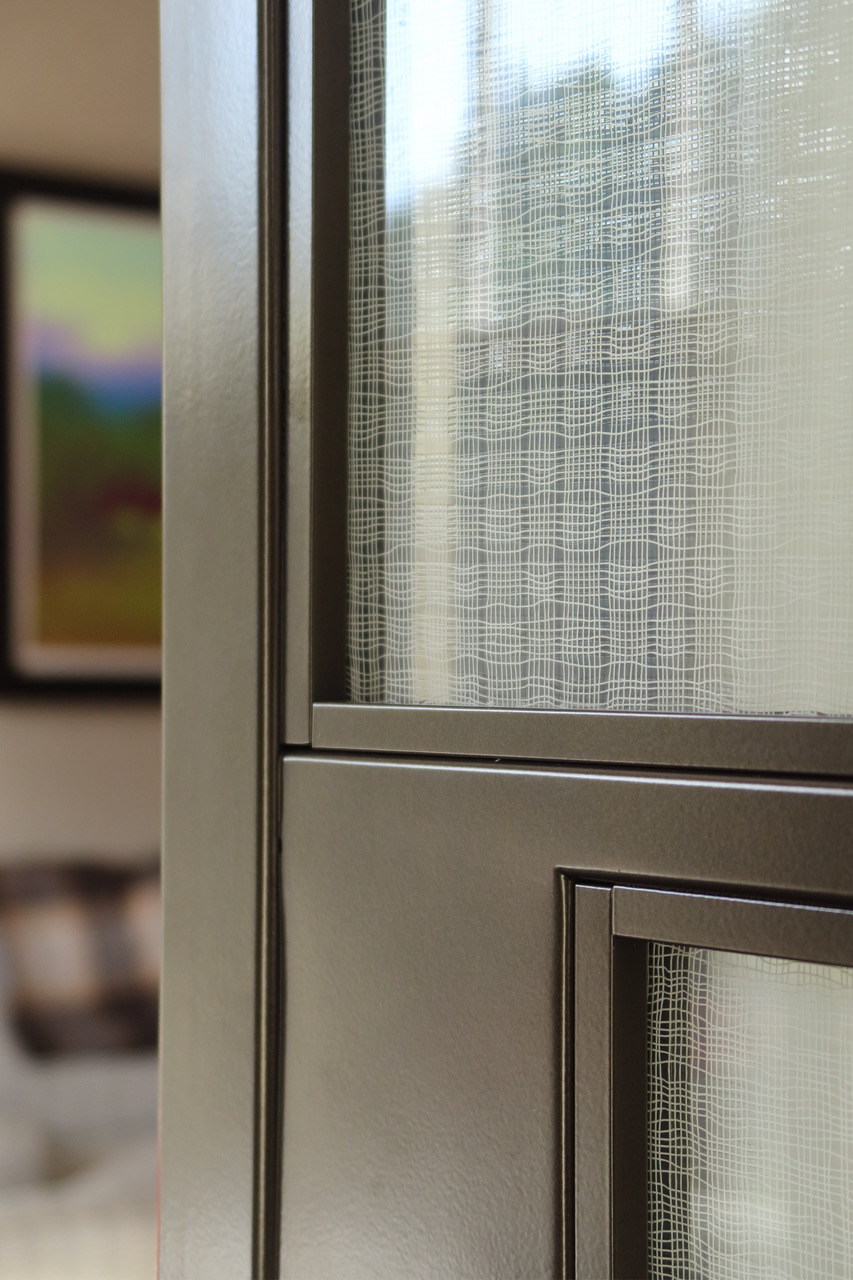 The door into the dining room was designed to be purposefully off-axis to visually lead into the space beyond.

For the design, the clients wanted the rooms to feel open, Parisian in detail, and to have a number of places to install art from their extensive collection. In response to this brief, Wadia expanded the entry hall and made the openings into the adjoining rooms larger to both maximize the natural light and to provide views of the green canopy of Central Park beyond. The hallway to the bedrooms was widened, creating a gallery to hang and view art.

To give the sense of a vintage old-world apartment, the paneled walls in the foyer and living room are painted white and incorporate built-in display cabinets and niches for sculpture and vintage antiques found by the clients in Paris. Between the living and sitting rooms, also decorated by Wadia Associates, a custom glass-and-steel Harmon hinge door creates a secondary passage that can be closed for privacy or opened for entertaining, folding neatly into custom wall pockets which read as steel-and-glass panels. In the living room, a floor-to-ceiling piece by artist Charles Gaines forms the focal point of the art-filled space.

The openings of the rooms off of the entrance foyer were enlarged to brighten and generate interaction between the spaces.

The panels in the living room accentuate the niche display containing brown lacquer and stained wood cabinets found by the client during a trip to Paris.

In the living room, illuminated glass shelves in the built-in cabinets were designed to showcase the client’s collection of small sculpture and art.