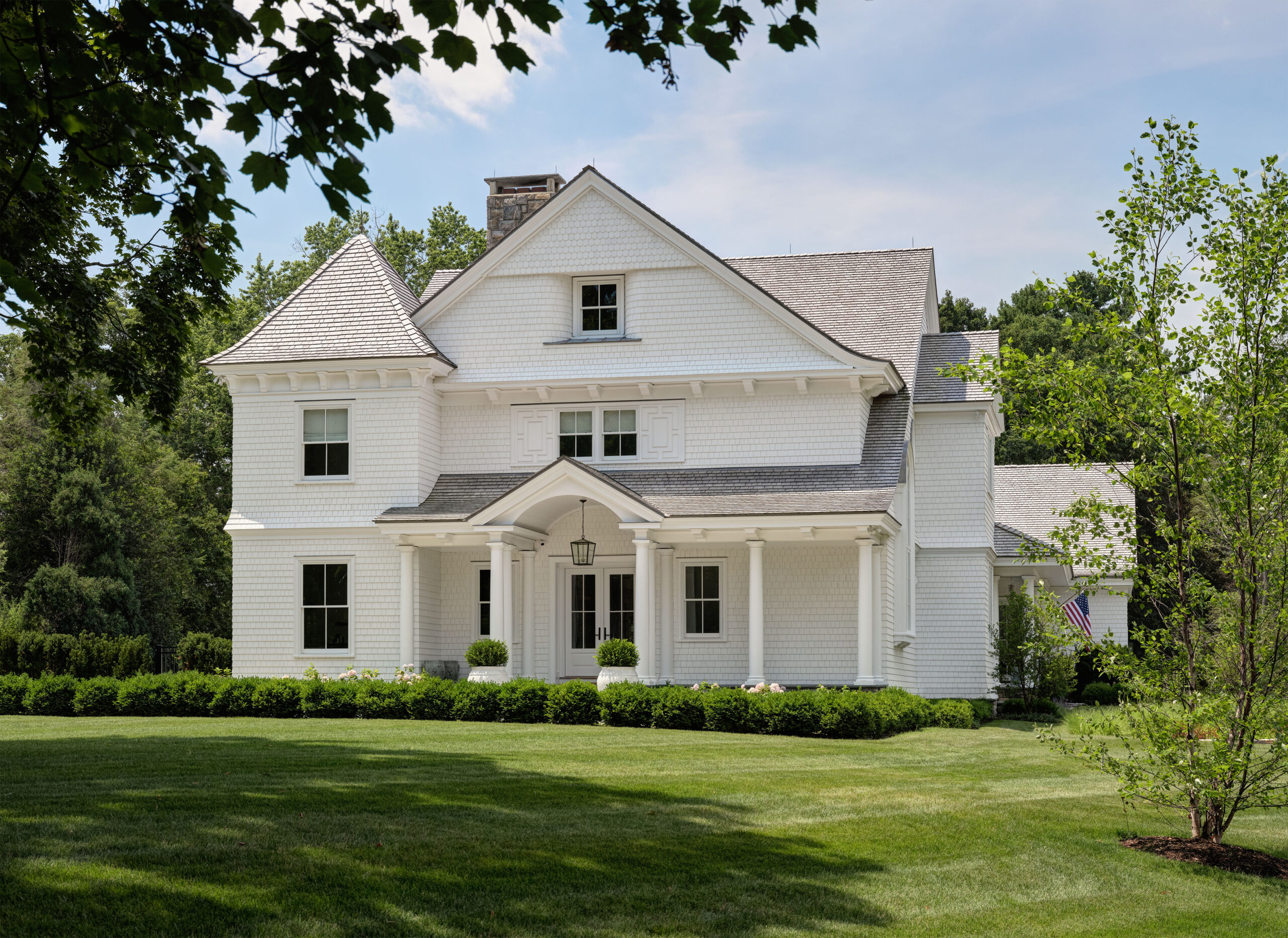 Designing for a Highly Visible Lot

Located in a shorefront community on a triangular lot screened by tall trees and bordered on two sides by roads, this seemingly modest white Shingle Style house was endowed with a double-edged gift: it is visible on three sides and only the rear façade is somewhat obscured from the street. As a result, every element of its design needed to be perfectly resolved since the exterior could hardly be hidden from the passerby. Historically, the Shingle Style has given rise to a range of intriguing and rambling designs imbued with warm golden textures created by their shingled wrappings. The decision to paint this very concise house bright white lends it a cool level of sophistication that balances the gentle warmth of its shingle details.

The clients came to Wadia Associates with a vision: a home covered by great sweeping roofs, an enormous window in the stairwell, and smaller windows set deep into the gables with the shingles rolling in at their sides. But that vision came with an equally specific budget. These hallmark Shingle Style details—expensive elements to incorporate on even an expansive budget—were made possible by subtly economizing—or “value engineering” in trade jargon. Since Wadia collaborates with its sister company, Wadia Construction, costs can be controlled more easily while the high standard needed to build such a design is still maintained. 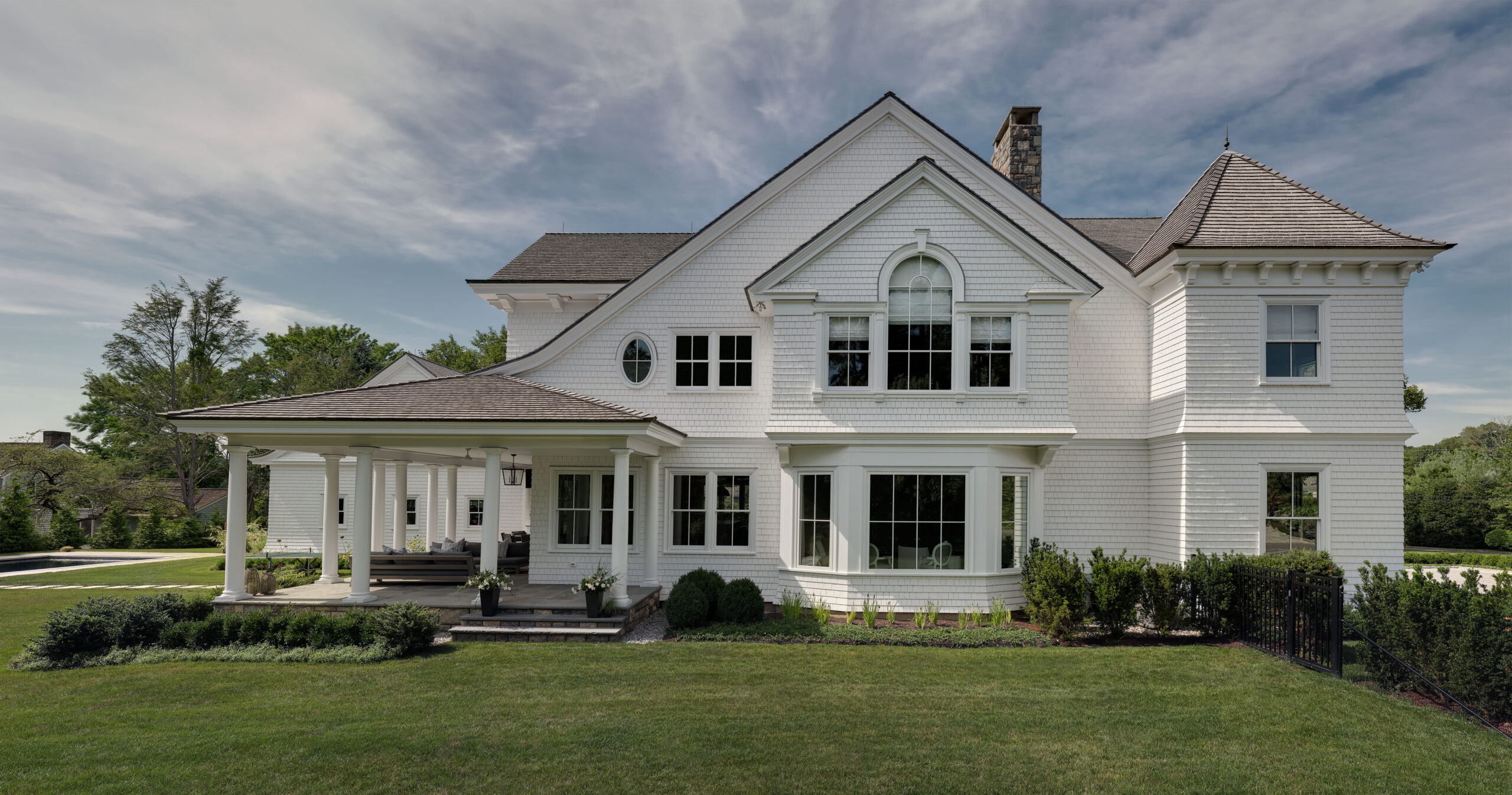 The south side of the house is centered by the large living room bay with the master suite above. The square tower contains the study with a bedroom upstairs. 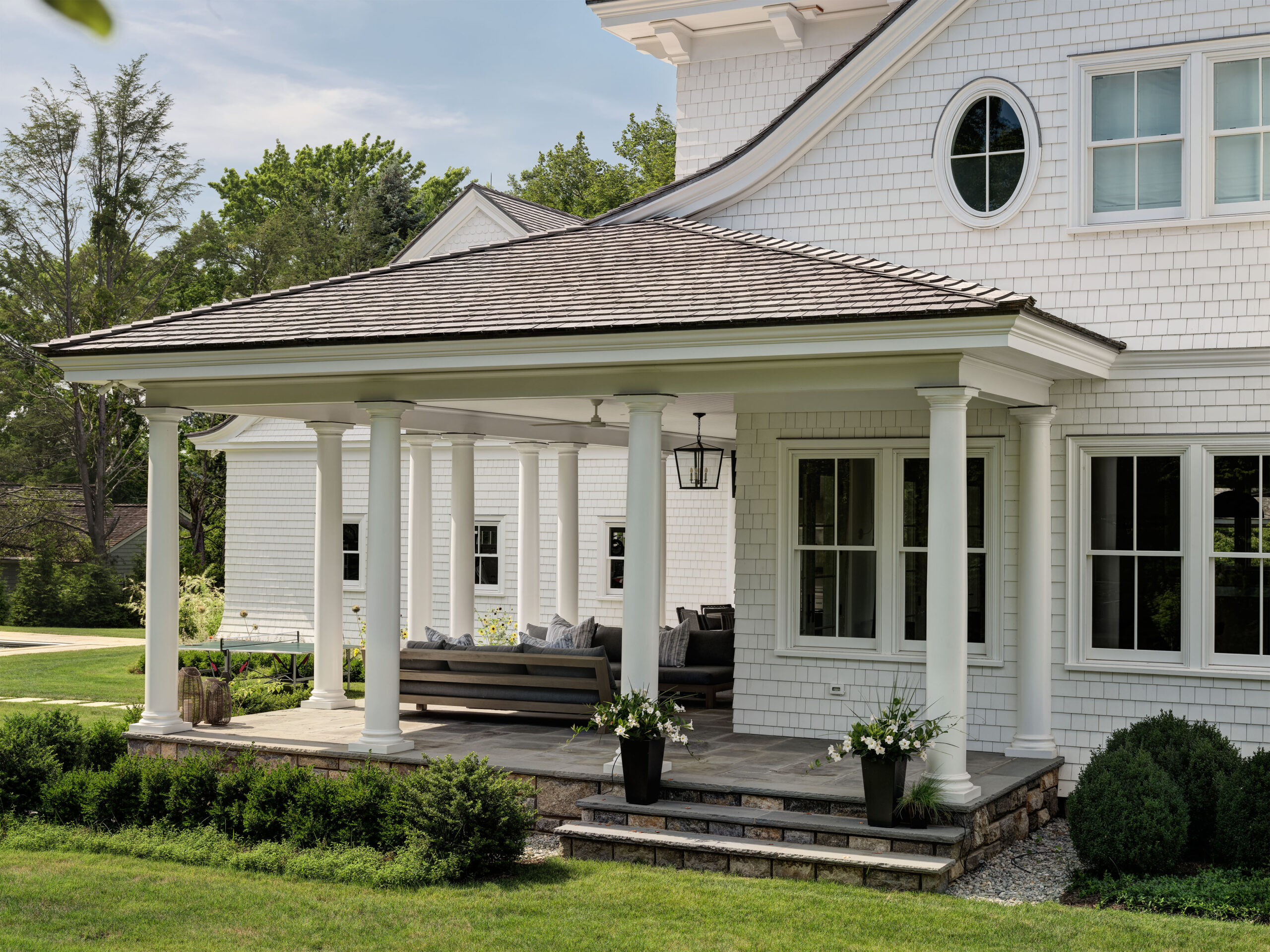 The porch off the kitchen and dining room wraps the corner of the house. 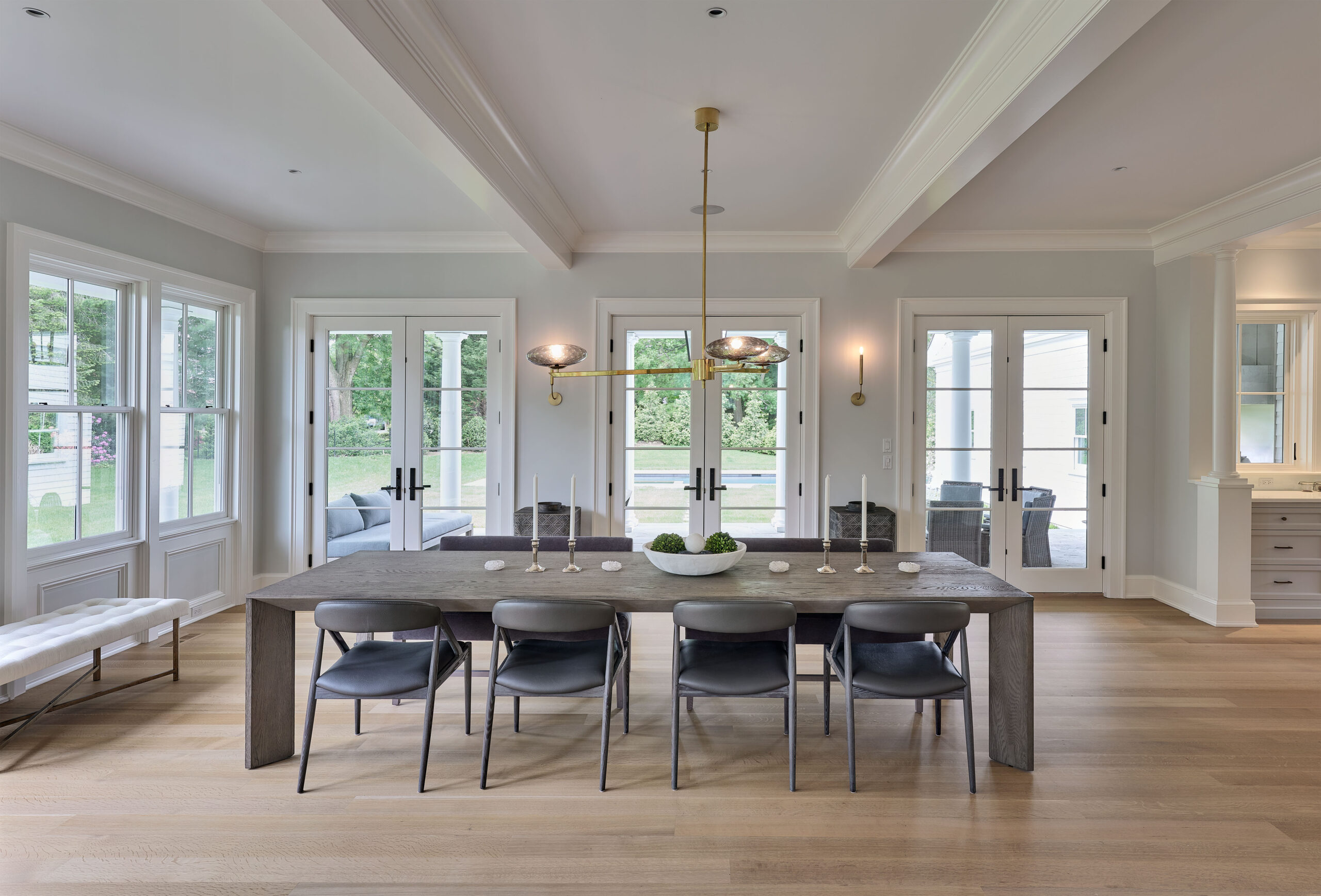 Overlooking the rear porch and pool, the dining room opens directly into the kitchen. 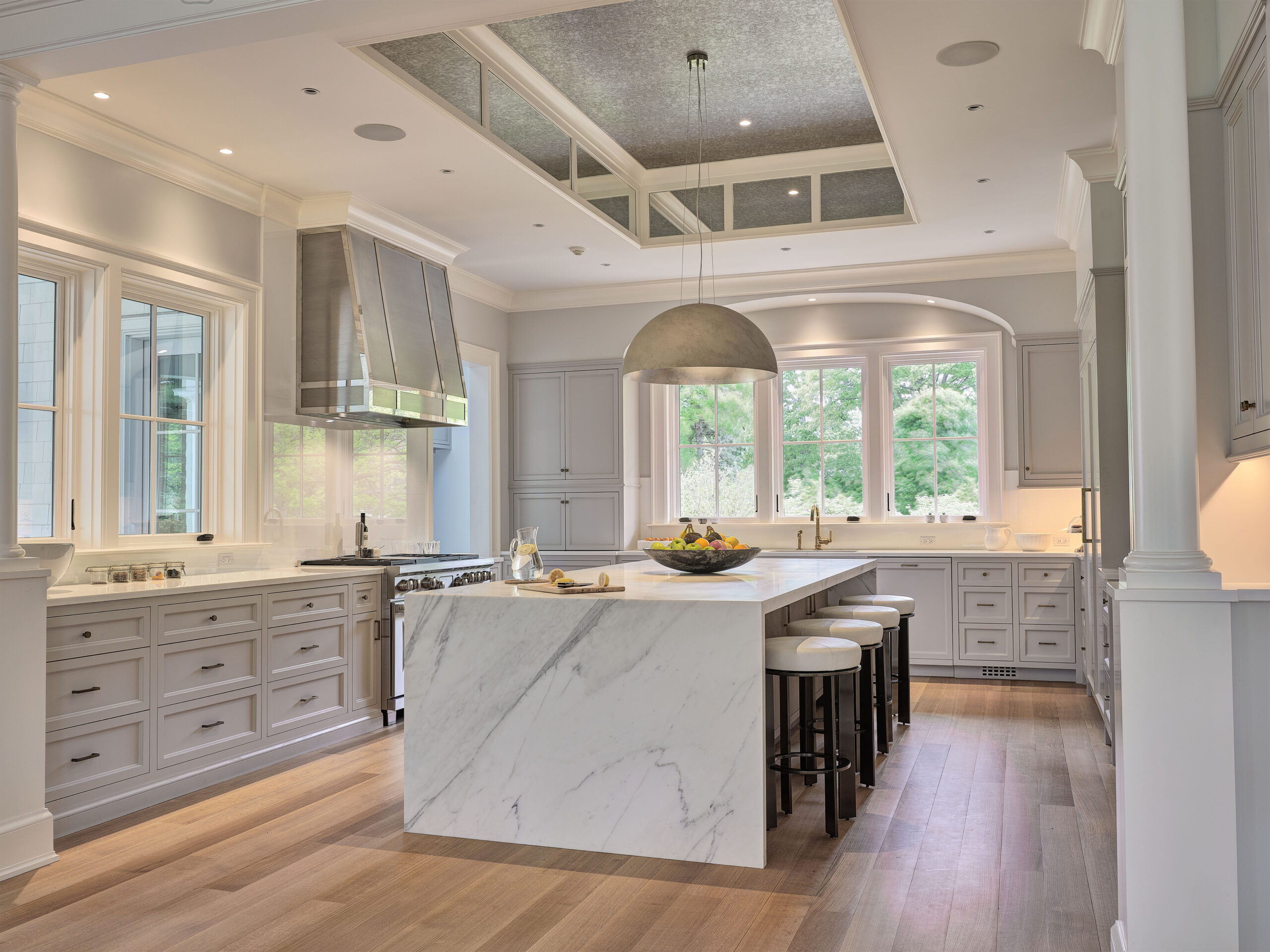 The kitchen, set below a raised section on the second floor, has a silver-leafed ceiling coffer with mirrored side panels that create the sense of a skylight. The island with a Calacatta marble countertop anchors the space. 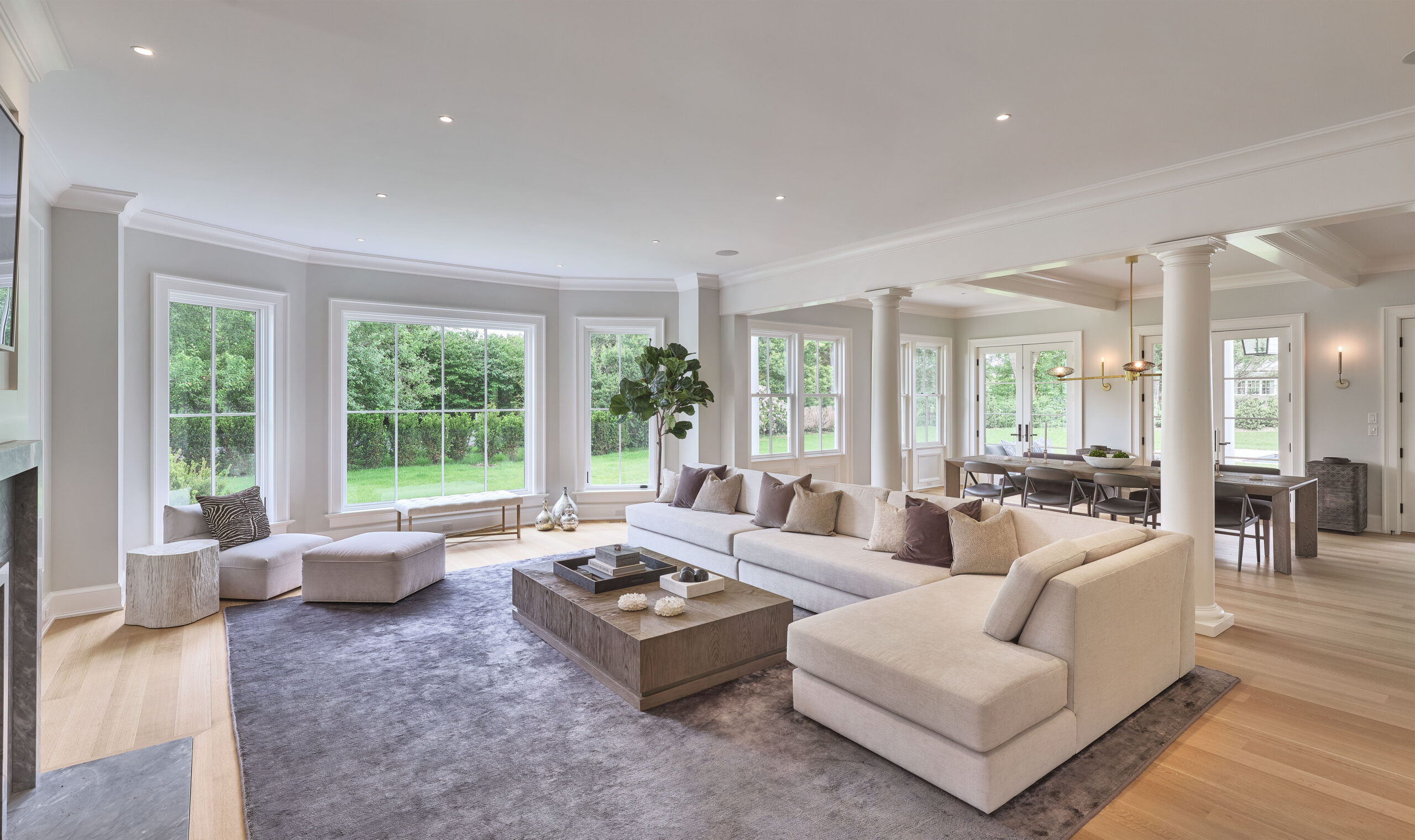 The living and dining rooms function as one open space. The south and west sides of the house are wrapped in glass. 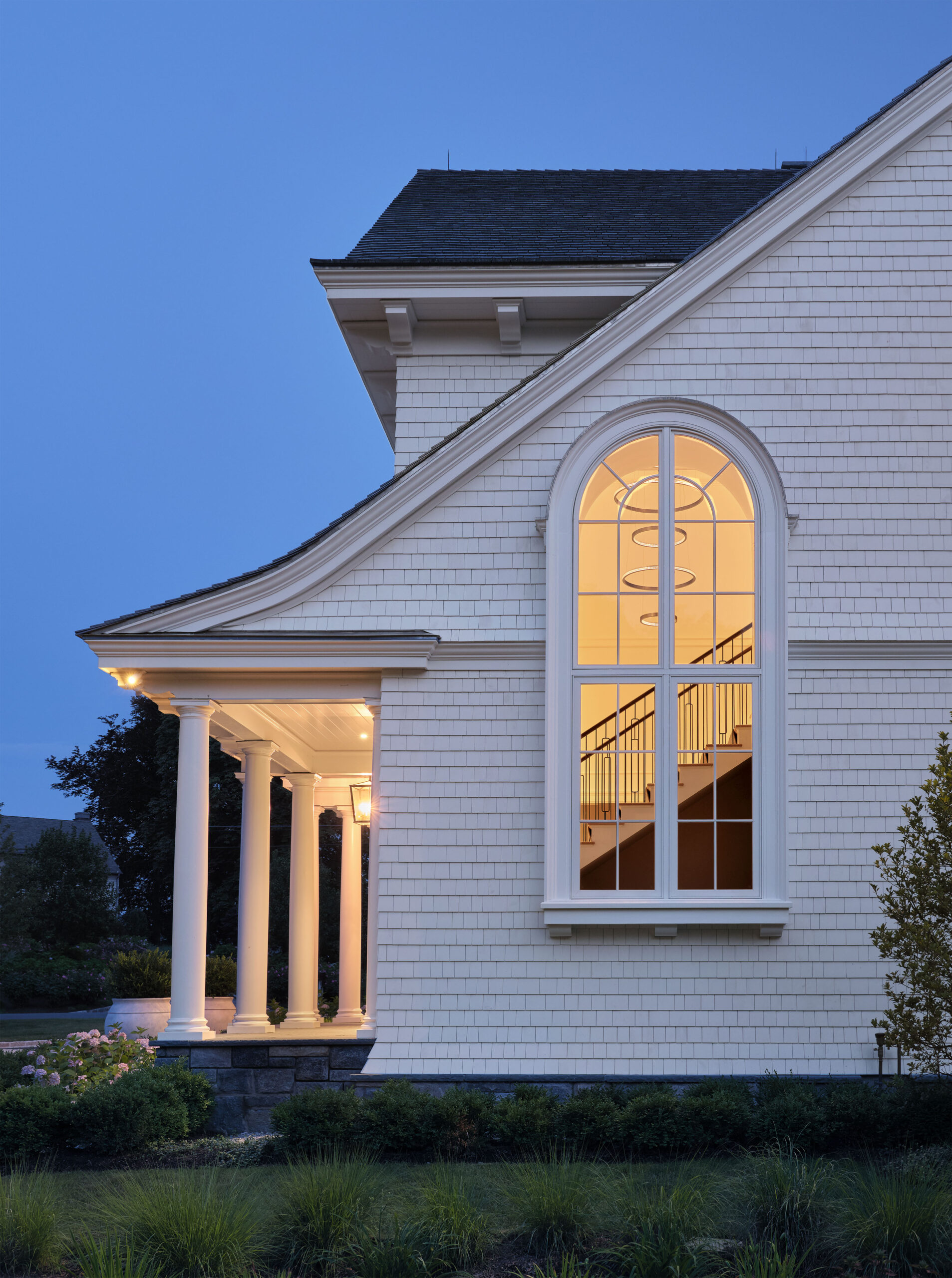 The arched window of the stairhall, columns of the front porch and sweeping roofline creates a dynamic composition. 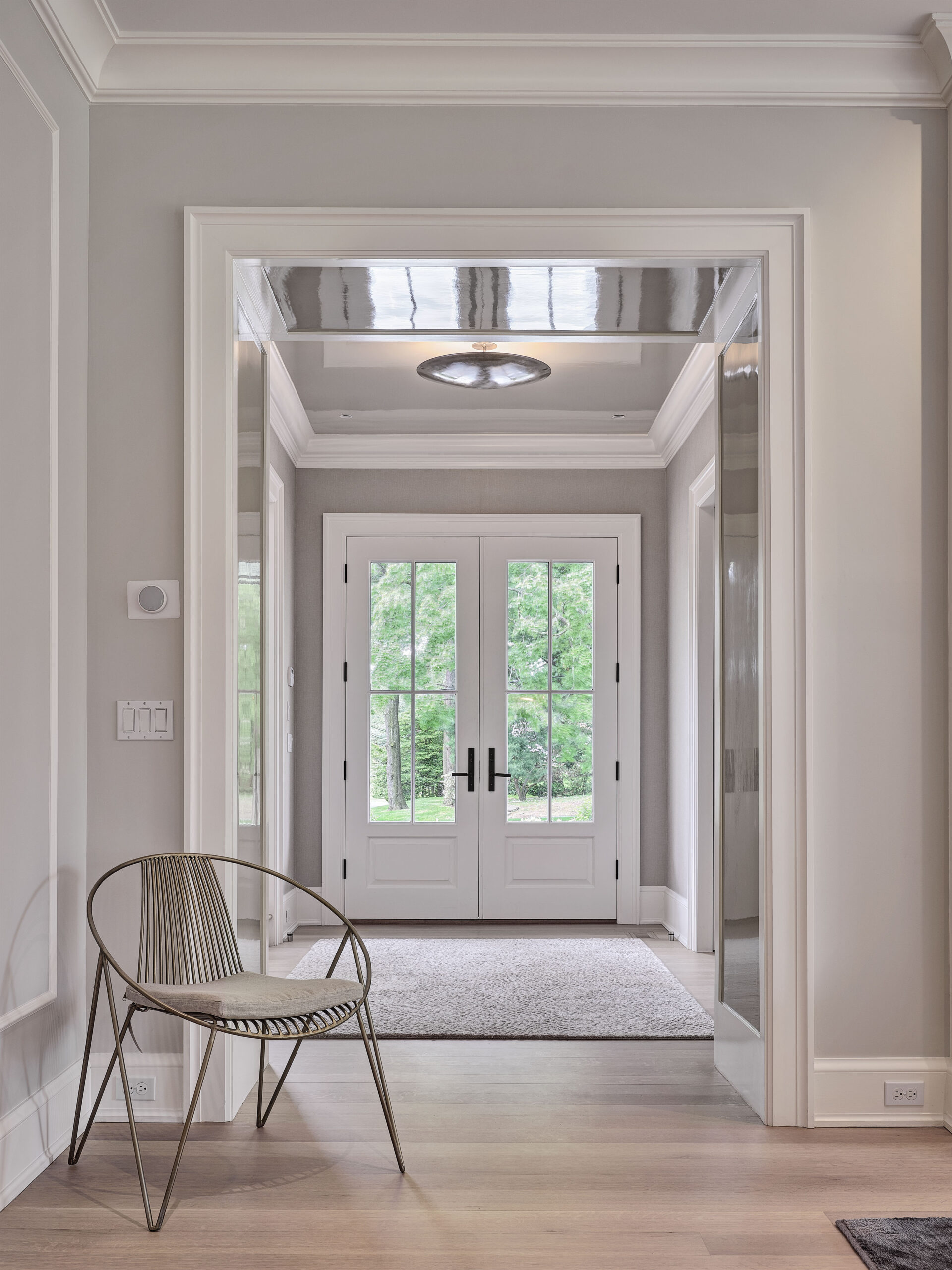 The deep-set jambs of the opening separating the entry and living room is painted with a highly reflective dark gray paint. 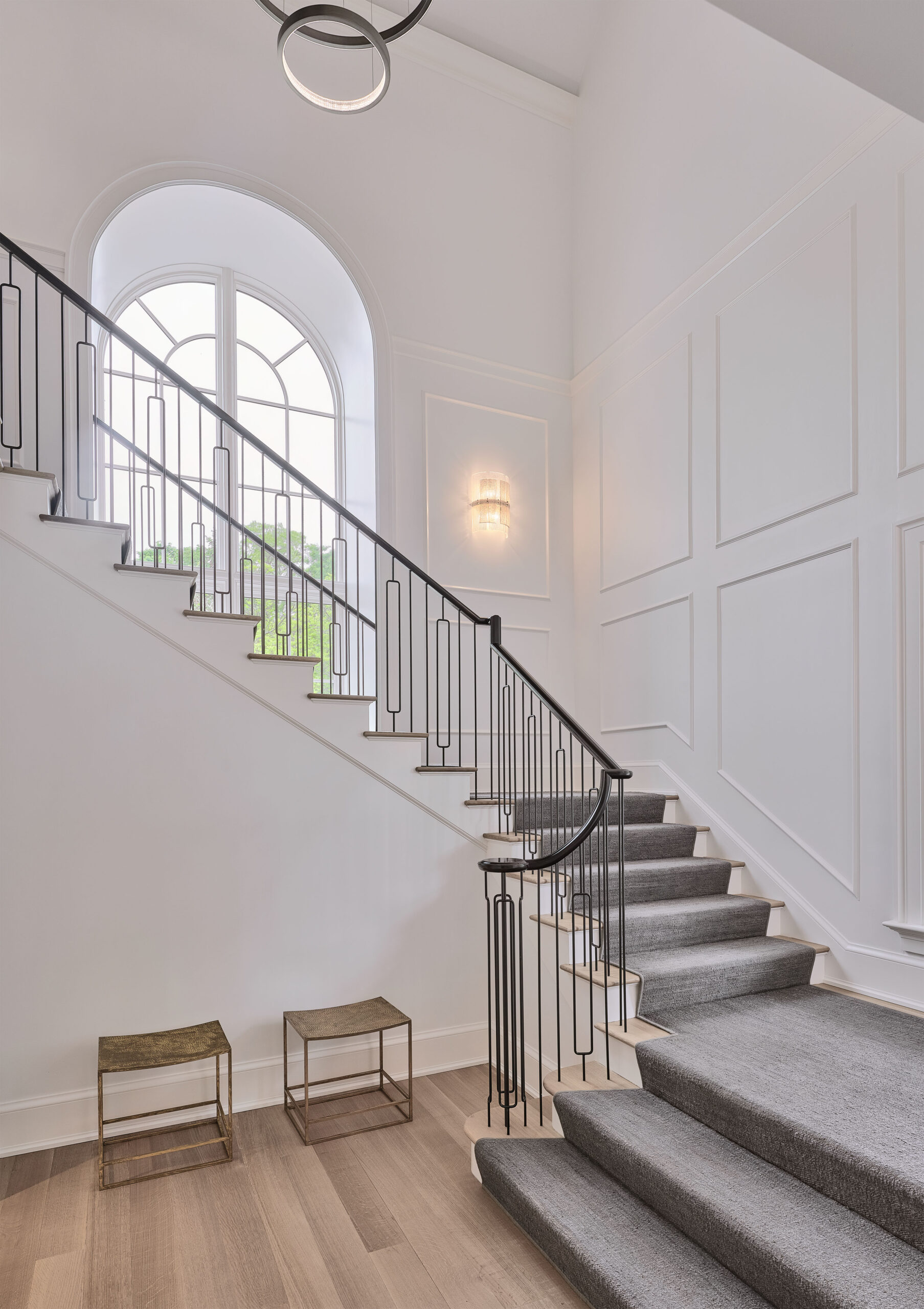 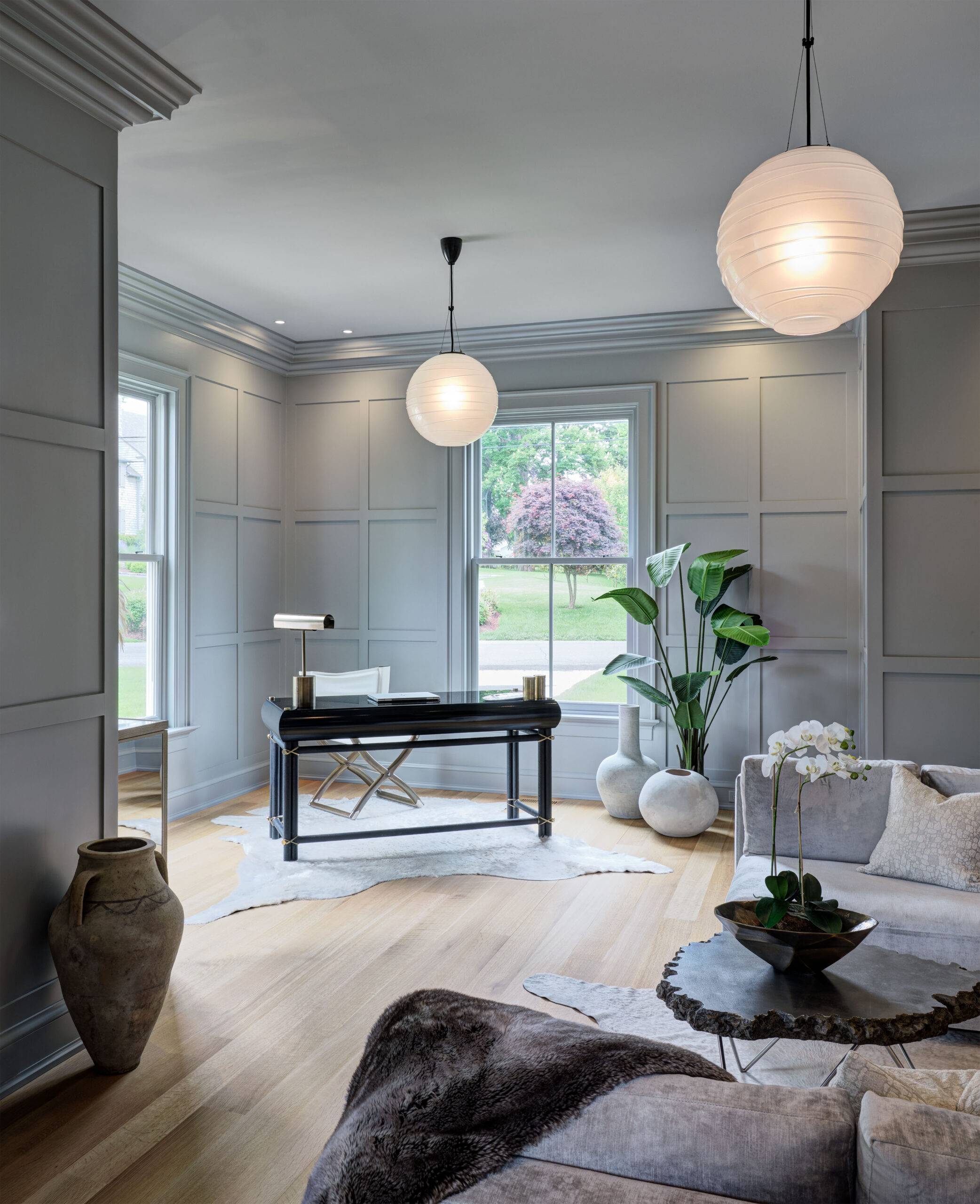 The study in the base of the square tower is painted a warm soothing gray; it is divided into separate work and reading areas. 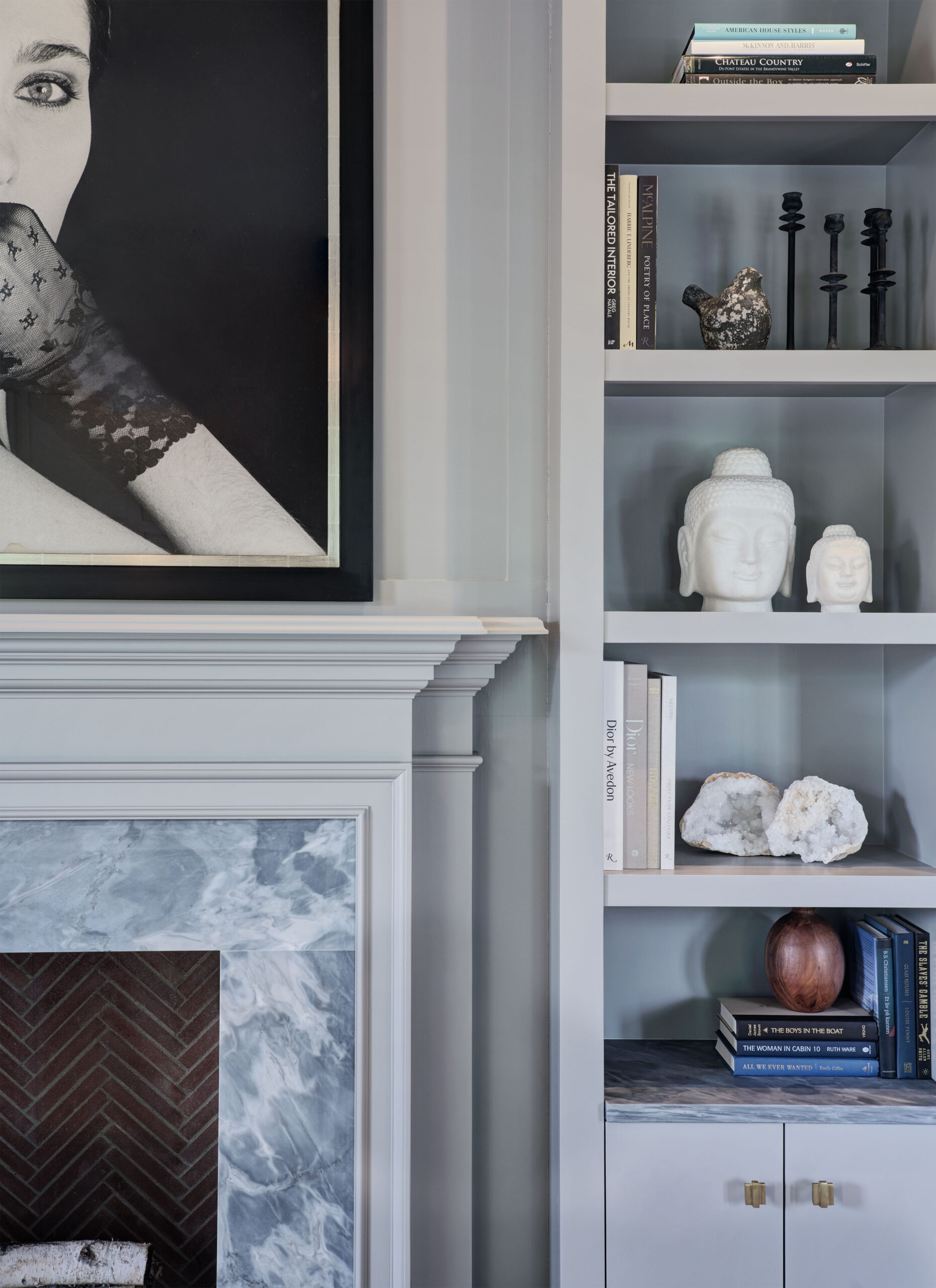 In the study, bookshelves frame the fireplace mantel; its Bardiglio marble surround is a lovely gray color. 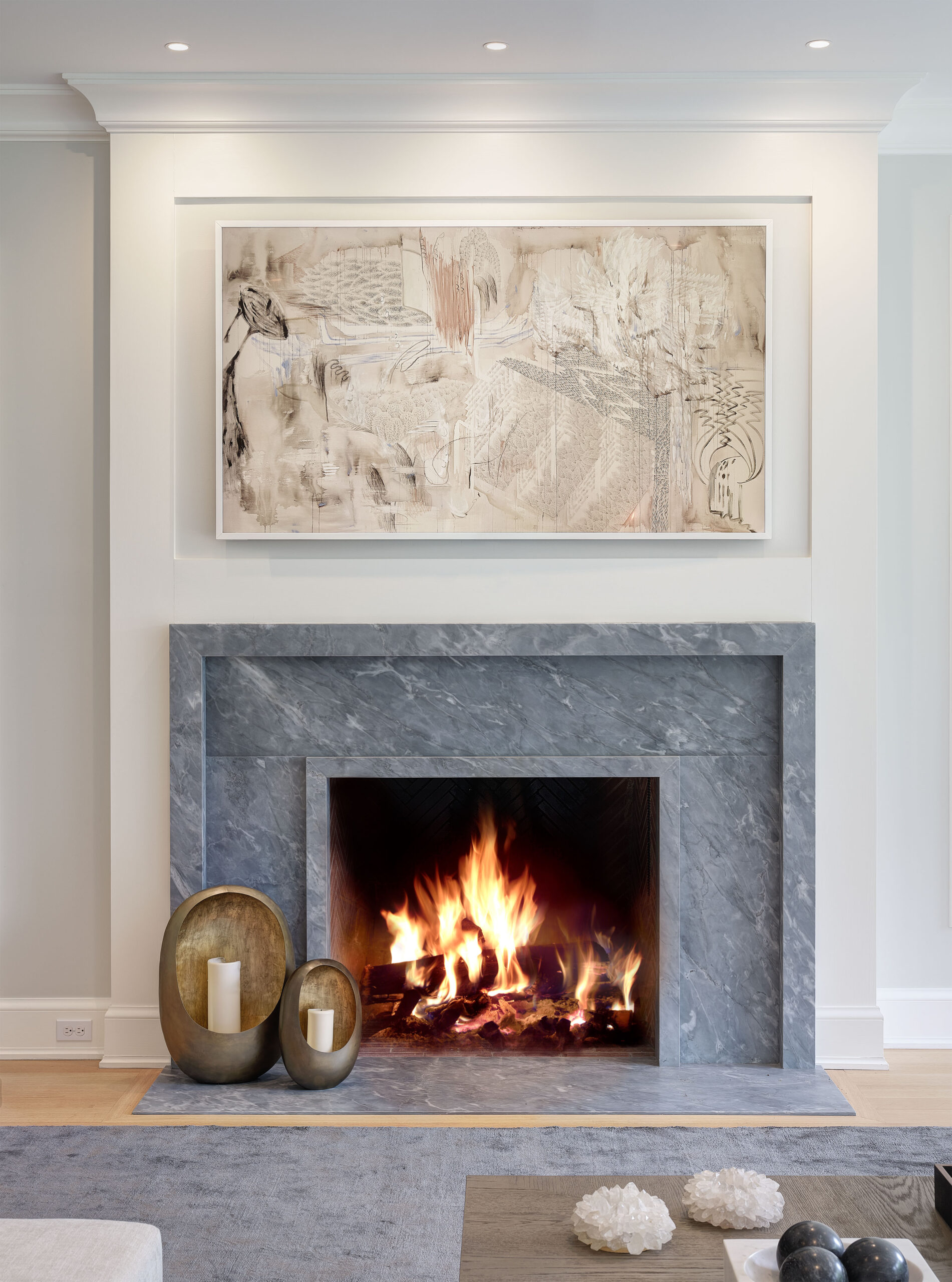 Made up of an inner and outer frame, the living room mantel is composed of the same Bardiglio marble used in the study but cut from a different section of the quarry. 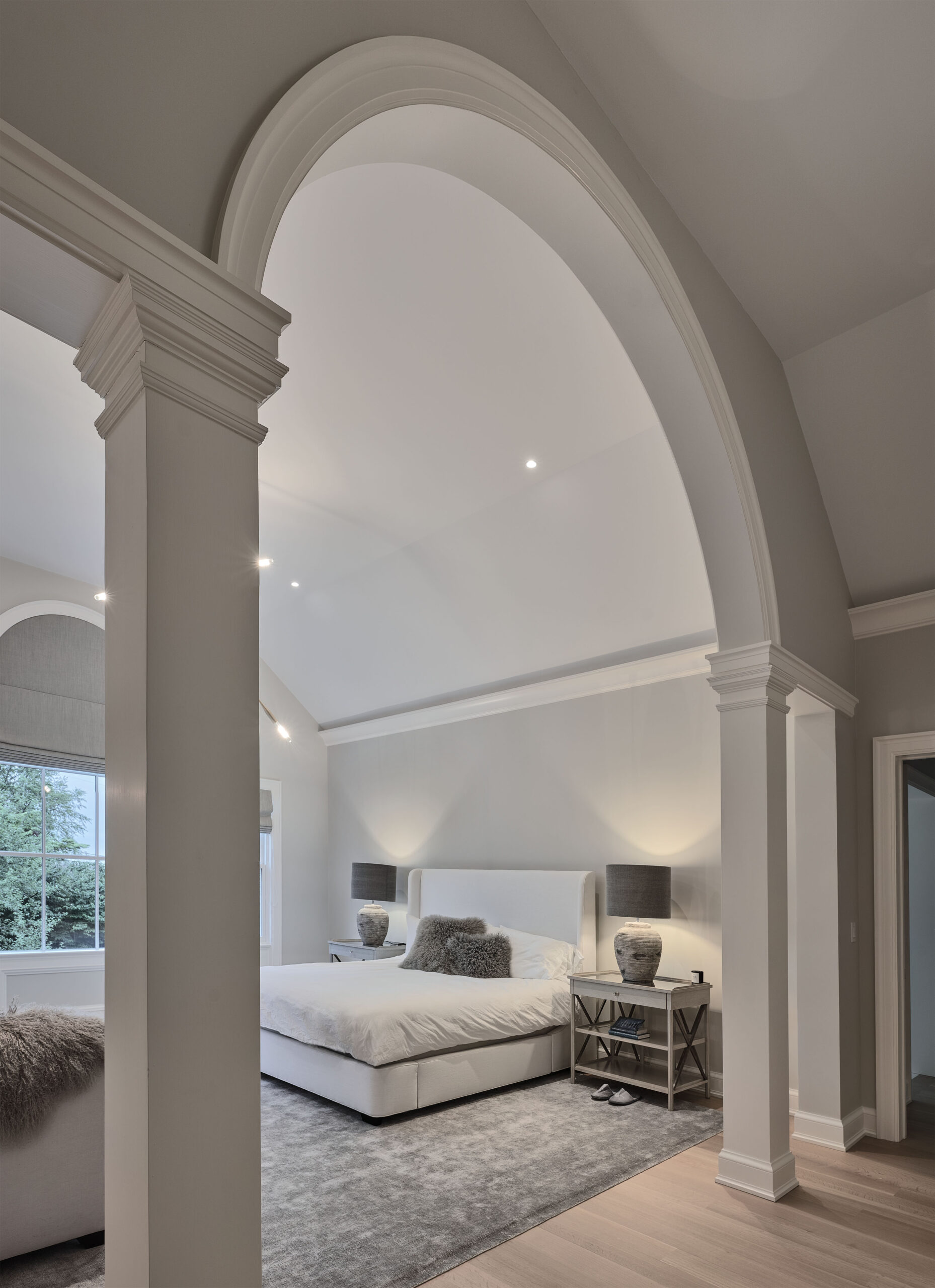 An arch in the master bedroom separates the dressing and bathroom vestibule from the sleeping area. 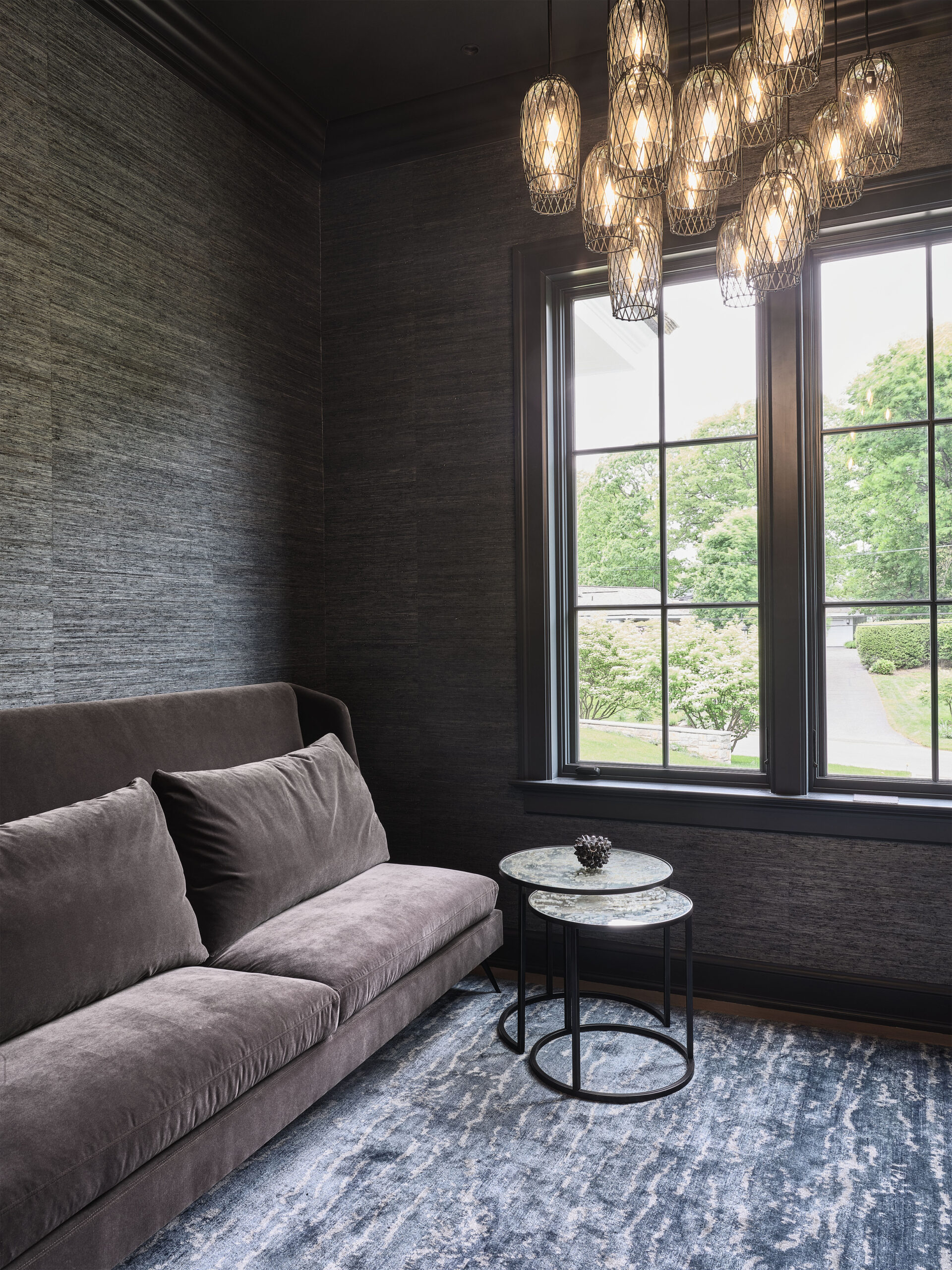 The office off of the kitchen feels sensuous and cave-like. 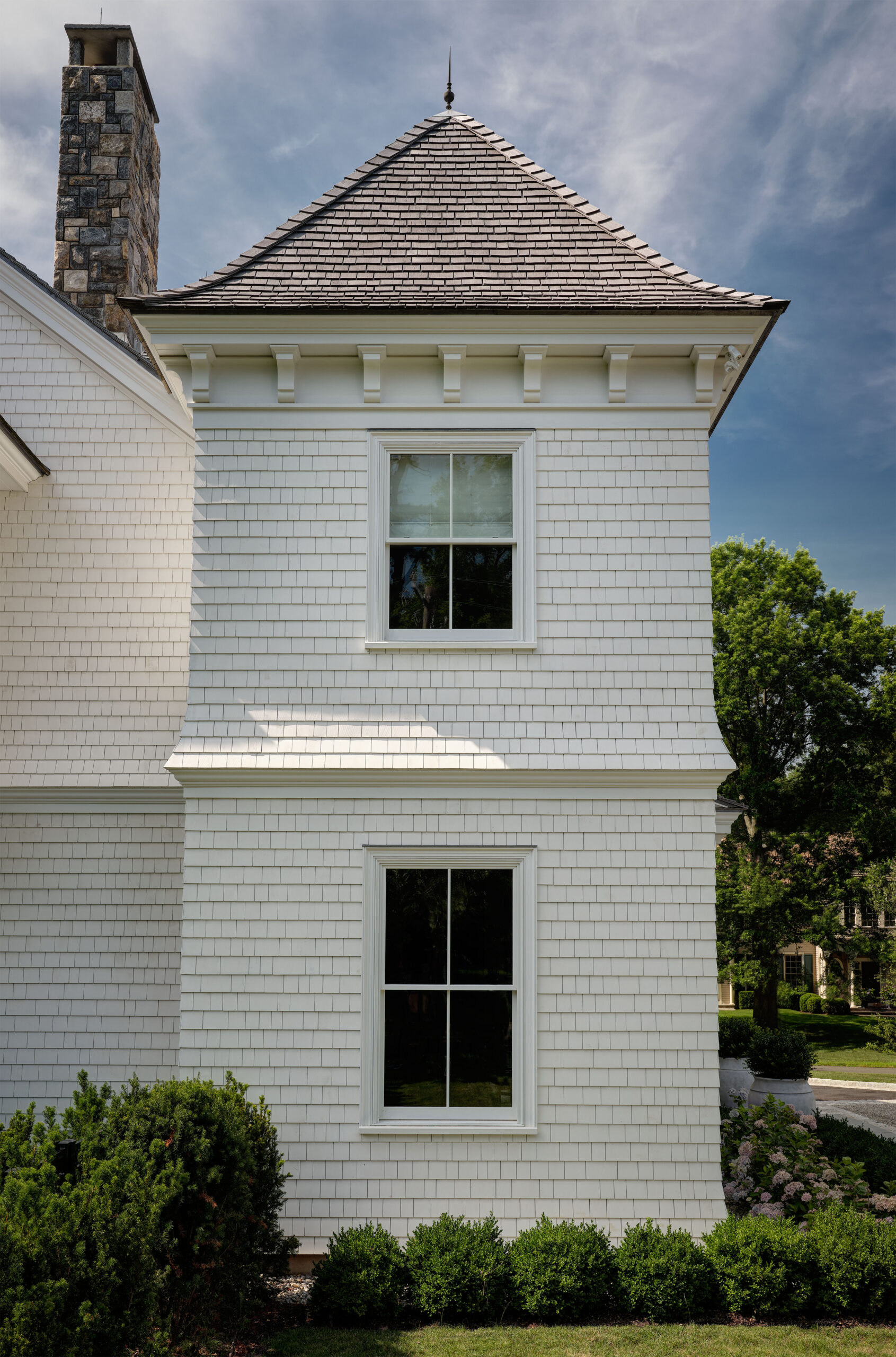 The square tower contains the study with a bedroom upstairs. 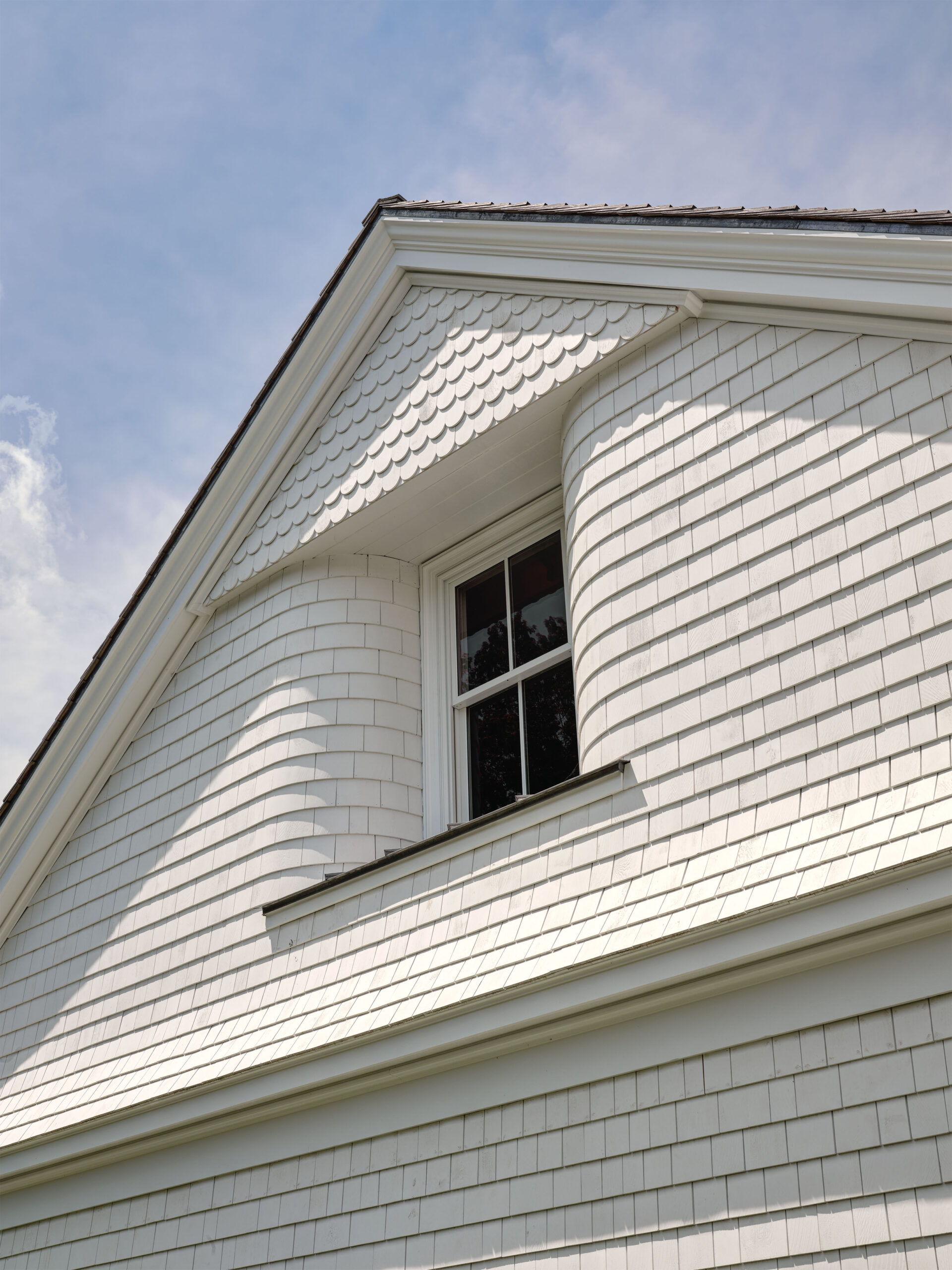 Gable windows in both the front of the house and the garage are set into deeply curved jambs.

Drawings are followed exactly and sloppy interpretations, often the work of profit-driven builders, are completely eliminated. This synergy between design and construction produces details that would not have been available at the same cost from another builder. The interiors of the house unfold in stages. A narrow entry hall with lacquered walls and ceiling opens to an intimate library to the south and leads further on into the family room with its large bow window. This central space, flooded with sunlight, expands outward in three directions to the dining room and kitchen and then spills out onto a covered porch at the back. Wadia dispensed of the formal living and dining rooms and instead used columns and beams to divide the essentially open plan—a modern-day interpretation of the original Shingle Style “living hall”— into zones for sitting, dining, and cooking. With the south and west walls being made of glass from end to end, the space is exceedingly bright and the cool grays, spare moldings, and light touch of the interior detailing create a contemporary vibe.

The stair hall, lit by a double-height arched window, is crisply paneled; its wrought-iron railing is stylized and sleek. But while the interiors feel thoroughly modern, traditional proportions and architectural rhetoric still define all the spaces. Upstairs, for example, the master bedroom enjoys vaulted ceilings and light from a large Palladian window; its iconic shape is echoed by the arched entrance that separates the closets and master bath from the sleeping area. Three additional bedrooms with private baths and a laundry fill out the second floor while the basement is allotted to a guest room and bath, wine cellar and tasting area, recreation space, and a gym. Off the rear porch, a stone path extends behind the garage out to a pool at the back side of the triangular lot, hidden from view. Because of the site’s visibility, even the garage was worked carefully into the sweep of the roofs, while inlaid wood panels and straight and wavy shingles give the balanced yet asymmetrical façades greater depth.

Running alongside the garage, the path leading to the pool is set on axis with one of the doors off of the dining room.

The living room has a generous view of the yard through a wide bay window.