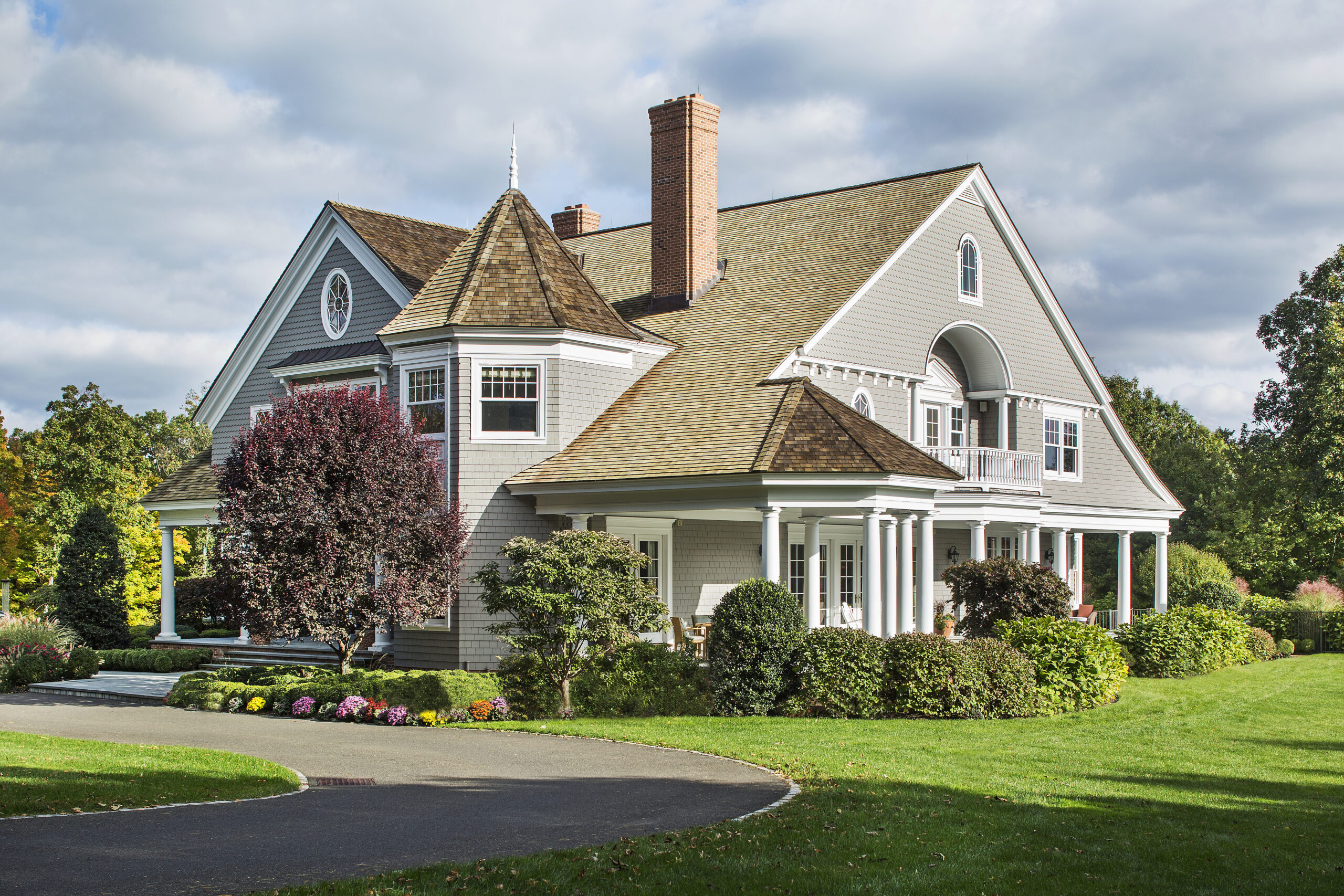 The Power of the Broad-Front Gable

Glimpsed from a distance across an open field and seen through the trees before turning into the driveway, this Shingle Style house was designed to make a strong first impression. In considering this quiet back-country property set behind a farm on a cul-de-sac, Wadia Associates decided the house should make a direct and simple statement without being overbearing or fussy. As with all of their projects, Wadia contemplated the approach and the orientation of the rooms to maximize light and views. Here, the solution prescribed that the long southwest elevation with its great sweeping gable seen through the field be encountered first, before arriving at the actual entrance to the house to the northwest. In a sense, this house has two primary façades: one that is seen from afar and then the narrower more intimate entrance front that is subsequently revealed. The Shingle Style, with its picturesque arsenal of bays, gables, and verandas, allowed Wadia to knit these two façades together coherently so that they relate and flow into one another. 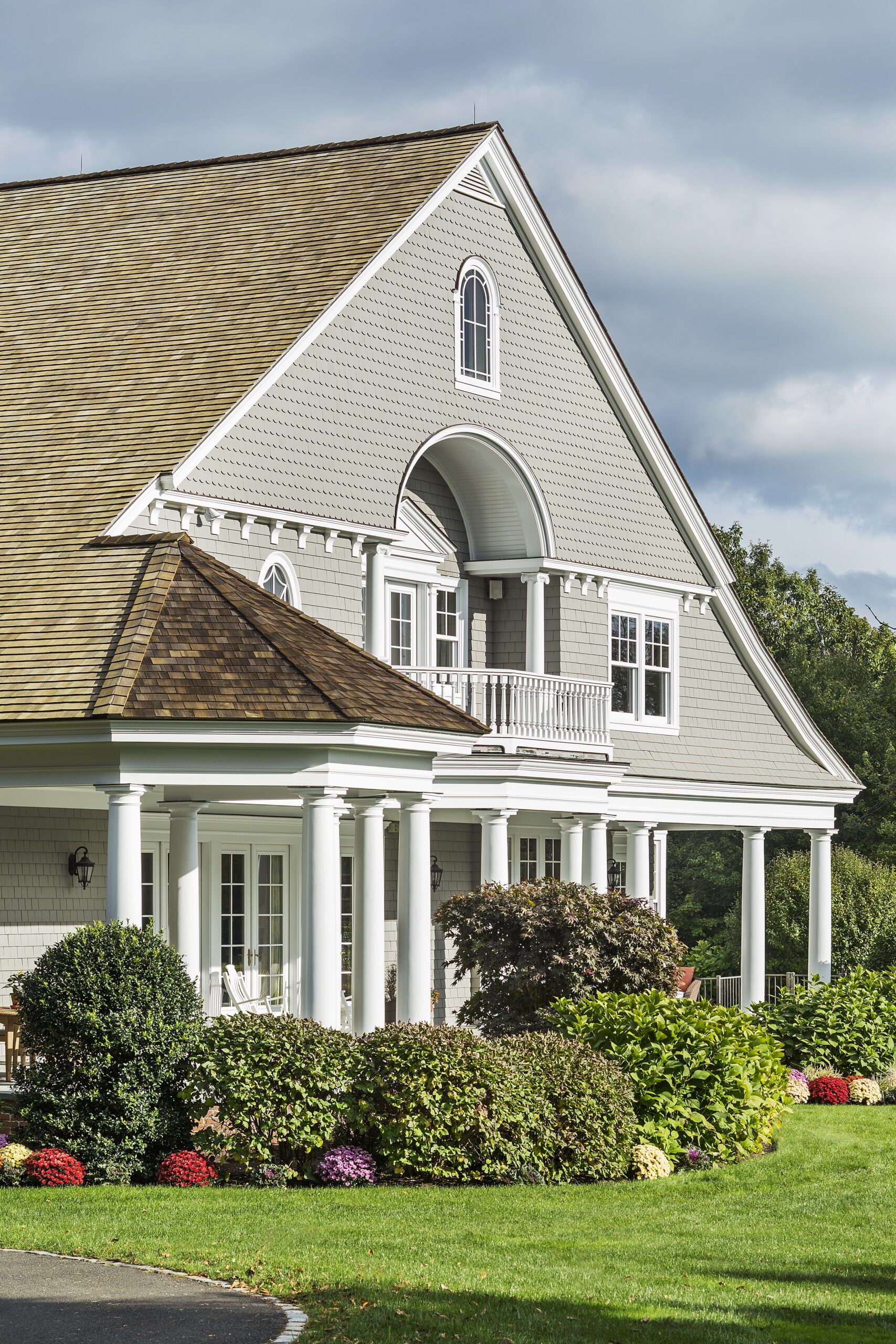 Each facade is composed with a strong symmetrical element at its center. 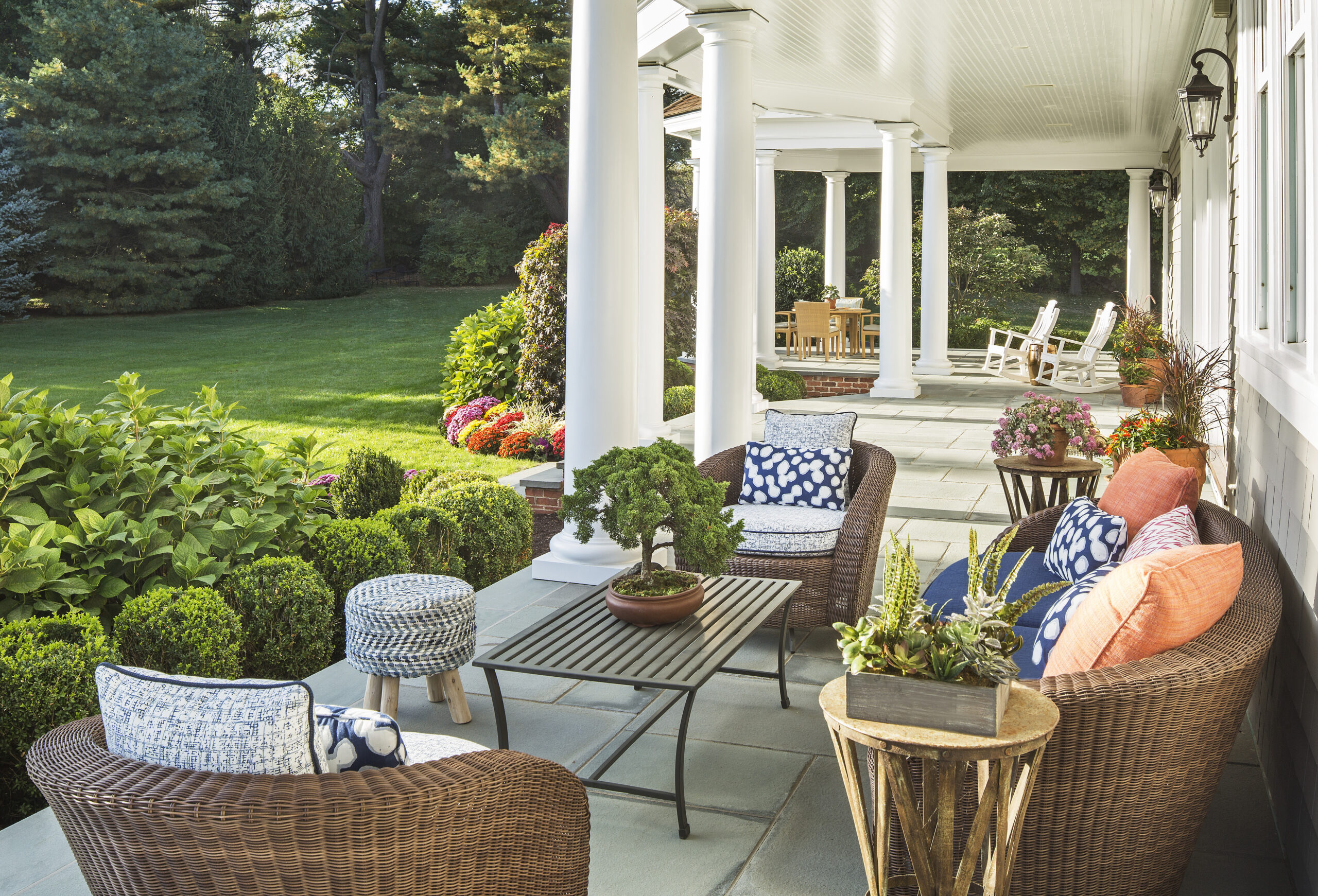 Compositionally, the long southwest-facing porch is divided into several outdoor rooms, each with a distinct sitting area.

Just before the turn of the twentieth century, the Shingle Style flourished, its exuberance soon to be replaced by the more symmetrical Colonial Revival. During this period, remarkable houses, such as those for Cyrus McCormick (1882) in Richfield Springs, New York, and William G. Low (1887) in Bristol, Rhode Island, by McKim, Mead & White, and several by Bruce Price in Tuxedo Park, New York, incorporated massive broadfront gables that gave the designs a pleasing monolithic quality. It was this power and cohesive strength that Wadia sought to tap into by using the long gable for the primary façade of this new house for a young family. The roof floats over a long porch that runs the entire length of the southwest elevation. The more heavily used rooms—the kitchen, breakfast, and family rooms—open onto this veranda and enjoy views over the field to the southwest and of the setting sun. Wadia composed each façade with a strong symmetrical element. On the second floor of the primary façade, a balcony off the master bedroom set under a deep-set arch reinforces the center of the gable. Meanwhile, the northeast front is anchored by the bay of the living room that extends to the second floor as a geometric panel framed by bathroom windows.

On the northwest corner, the roof sweeps down to an octagonal porch that is echoed by the shape of the turret containing a library and bedroom above. Wrapping the corner of the house, the porch acts as the pivot between the long and entry sides. Inside, the design is straightforward and simple. The entry opens into a hall extending the length of the house to the back door and culminates at the far end with a large window on the stair landing. At the half level, an unexpected passage leads to a studio space tucked above the garage. Wadia oriented the more formal living and dining rooms to the northeast. Extending in an enfilade, the octagonally shaped library, family room, kitchen, and breakfast room—set into a sunlit arching bay—stretch along the southwest front and connect to one another. The abundance of verandas and porches hearken to historic Shingle Style models; they succeed in opening the house to the bucolic landscape so that the experience from within is just as powerful as from without. 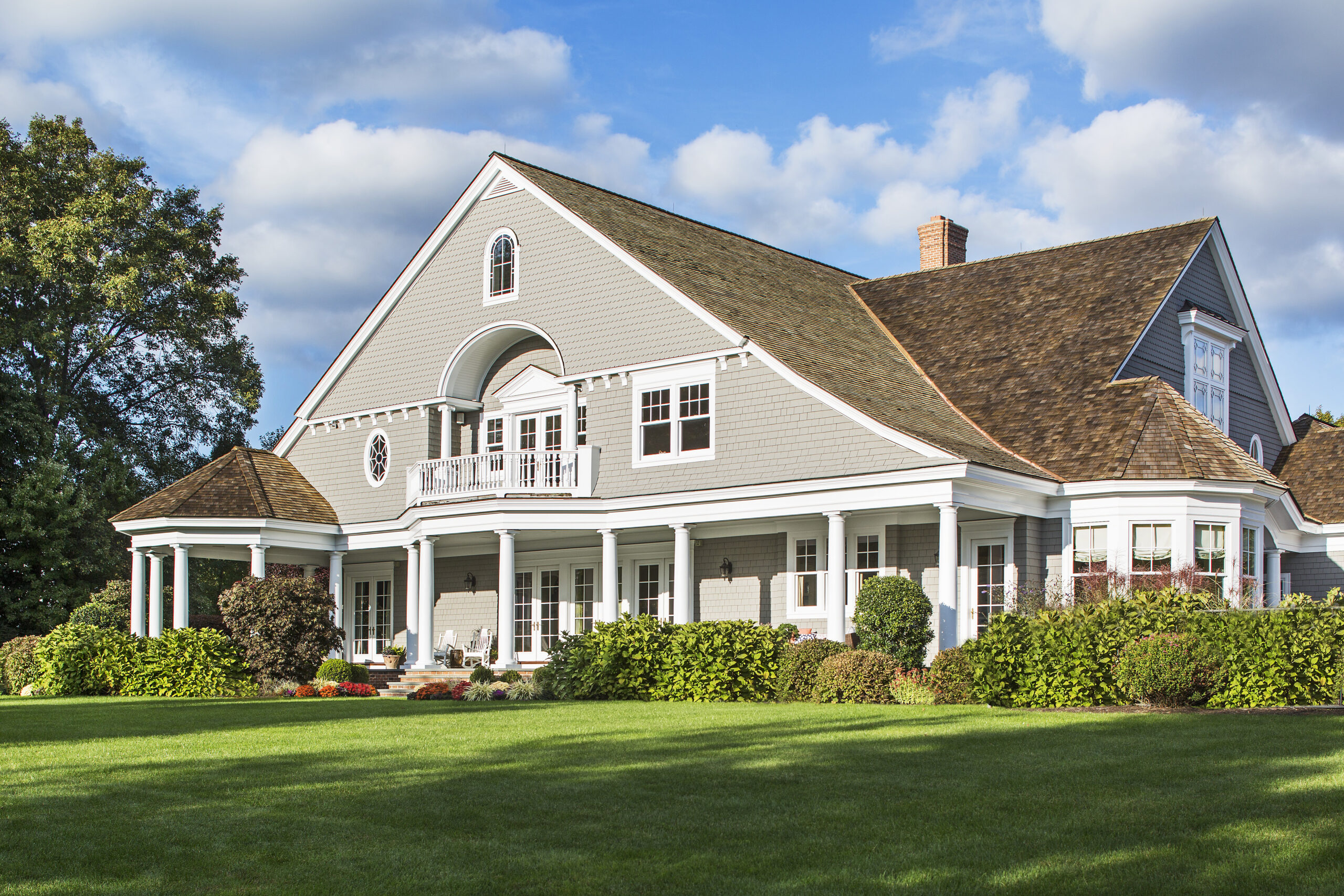 The large sheltering gable roof of the southwest elevation is first seen from a distance across a wide field. 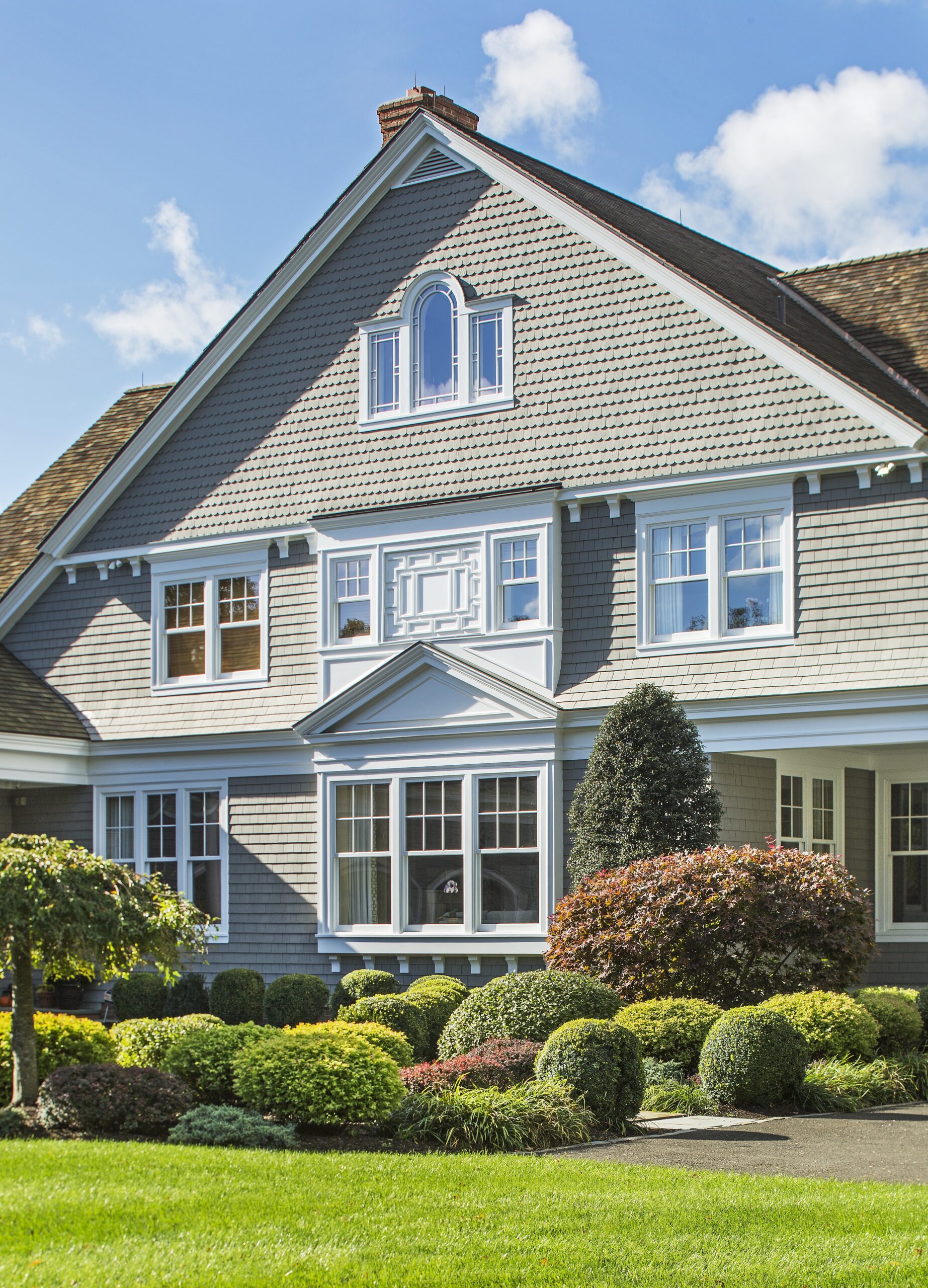 A geometric panel set between two second-floor bathroom windows extends the projecting form of the living room window up towards the Palladian window in the attic playroom.